I hope this would lead to Zuger getting into the CFHof!

[b]He'll talk all day about his teams and about the guys. But ask him about his own great moments and all his athletic achievements, and you run into a bit of a wall. It's clear he doesn't much like shining the spotlight on his own thick resume. We is fine. Me, not so much.

The only hint you'll get about his legendary past is the ring on his left hand. The one he earned as general manager of the 1986 Grey Cup champion Hamilton Tiger-Cats that he occasionally now wears for special occasions. Much like the man wearing it, it's dignified, understated and clearly important without appearing to have been ordered from the Floyd Mayweather garish bling collection.

"I designed it," Joe Zuger says.

That's as close to boasting as you'll get. So others will have to brag for him.

Enter the Hamilton Sports Hall of Fame. On Tuesday, the 75-year-old was named as a member of the local pantheon's class of 2015 along with Ticat Rocky DiPietro, track star and coach Patricia Cole, broadcasting icon Norm Marshall, blind golfer Claude Pattemore and the 1962 Hamilton Red Wings team. They'll be officially inducted in September.

While some classes have been heavy in achievement and excellence but lighter in big-time name recognition, this group is a heavyweight lineup.

Ticat fans still speak of DiPietro in the kind of reverential tones reserved for the most blood-and-guts players to wear the black and gold. Marshall is synonymous with Hamilton sports through his 55-year broadcasting career. Cole was a Canadian champion and a world-class coach. Pattemore was the best in blind golfing for nearly two decades and shot a personal best of 78.

As for the Red Wings, the Memorial Cup team of 1962 included future Canadian legend Paul Henderson as well as Pit Martin, Lowell MacDonald, Wayne Rivers and six others who played in the NHL or WHA. Not to mention John Gofton, who fans of the movie Slapshot will remember as drunken Brophy.

Then there's Zuger. After listening to his endless list of amazing feats recounted for the crowd at the announcement event, the legend remained unimpressed with his own resume.

Not true. He says he never thinks about his numbers anymore, though. What he's often thankful for these days is the decision he made to come to Hamilton in the first place.

After being drafted late in the 1961 NFL draft by the Detroit Lions, he had to decide where to go. The Lions said he could compete for a backup kicker spot. Then Ticats head coach Jim Trimble visited him at his Pennsylvania home, told him he'd have all the playing time he could want, and ultimately convinced him to come here for $8,500-a-year salary.

That's the moment his tale became a beautiful Hamilton story that will soon land him in the city's sporting hall.

He'd never been here. He knew only slightly more about the league from seeing the odd game on TV. What he found intriguing was his understanding that back in 1962, you had to not just knock a man down to make a tackle but pin him to the ground.

"You'd knock a guy down and you had five other guys jumping on top," he says. "It was a unique game."

When he arrived, everything fell into place. In his first game ever as a starter, he threw eight touchdown passes, which remains a CFL record.

"The first thing I said was, don't expect that every game," he laughs.

In his 10 years as a player, he won three Grey Cups including the 1967 title in which he was voted MVP. He led the league in punting several times, was a defensive back and, of course, starred as quarterback. Then he took over as GM in 1981 and built that championship team in '86. Which got him that ring.

He has others, too. He got one in 1963 and 1965. And you can argue he should have one from the Canadian Football Hall of Fame as well, except he's never been inducted. He says he's too old to worry about that now.

More aggravating is the absence of his '67 ring.

While participating in a curling bonspiel in Saskatchewan years ago, he took it off his finger, put it in his coat pocket and hung the jacket on the wall. When he returned after the game, the ring was gone. Years later, he says he got a call from a man identifying himself as a lawyer, saying he knew where the ring was and Zuger could get it back for $100.

Let's just say he declined the offer to pay the ransom.

It's OK now. He's still got the '86 ring. And now he's got a hall of fame in Hamilton finally eager to welcome him as an honoured member. As he should be.

As all the new inductees should be.[/b] 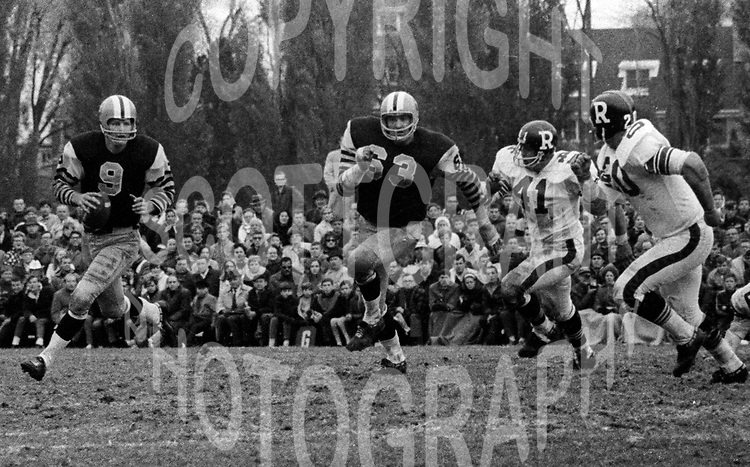 What a team! Last 6 games of the season without giving up a touchdown including the Grey Cup game. Watched the 63 game last night. Joe Zuger punting the ball. Bernie throwing to Tommy Grant ,Harney Henley and the long touchdown pass to Prince Hal. So many names of great players came back. You guys in Hamilton sure are spoiled but you deserve that for supporting your Ti-Cats. Just waiting for Mr. Zuger be inducted into the CFL Hall of Fame.

Thanks Grover for the article on Joe Zuger .

He obviously belongs in the Canadian Football Hall of Fame as a player and a builder . Some of the recent inductees having 5 years in the league is a joke .

What Joe didn't have was a catchy nickname like Swervin Mervyn but his contributions to Canadian Football are definitely hall worthy .

Pat Lynch ( We sat in the south stands watching the 8 touchdown, 572 yards passing , 67 - 21 thumping of the Little General's Riders.)

Rocky DiPietro is one of my all time favourite receivers. Mr Dependable and always a clutch receiver!!