Write these Cats off at your own peril

Write these Cats off at your own peril

[b]No one outside the Ticats faithful expected the black and gold to win Sunday.

All seven experts who make picks for CFL.ca picked the Argos to beat the Ticats, so did our very own John Hodge, who said the Argos would win by nine in his weekly picks post.

Everyone wrote the Ticats off, but lo and behold, here we sit and the Ticats are once again headed back to the East Final.

But Hamilton’s thrilling, come-from-behind win over Toronto on Sunday is just the latest evidence that you simply do not want to underestimate these Tiger-Cats.

This team has been dealing with various incarnations of adversity since Kent Austin took over after the 2012 season, and pundits and experts have been writing this team off at one point or another in every season Austin has been in charge of all things football in Hamilton.

First, we had the 2013 season that was played 45 km away in Guelph. All throughout that season, the Ticats lost precious practice time shuttling players from their downtown Hamilton offices to McMaster’s Ron Joyce Stadium for practice. The general belief was that commuting to Guelph and the lost practice time would take its toll on the team. That general belief was wrong, as all the Ticats did was win double digit games in the regular season for the first time since 2001 and play in the Grey Cup for the first time since 1999.

Next, we had the 2014 season, where delays in stadium completion, a concussion to new starting quarterback Zach Collaros early in the season, and the jettisoning of so many veteran players — gone were Henry Burris, Marwan Hage, Dave Stala and Jamall Johnson, to name a few — were cited as reasons for the horrid 1-6 start to the season. Everyone wrote them off, thinking there was no way the Ticats could climb out of that hole and reach the Grey Cup once again. The 2013 season was a one-off, and the Ticats were going to go back to being the team loaded with potential, but short on accomplishments. Well, the Ticats proved the experts wrong again, as from Labour Day on the team ran off eight wins in their final 11 games, captured first in the East for the first time in 16 years and once again played in the Grey Cup.

Finally, 2015 looked like it was the year everything as going to come together. The Ticats rolled off impressive win after impressive win and were 8-3 as summer was about to turn into fall. It looked like everything was going Hamilton’s way until the unthinkable happened on September 19. Consensus 2015 MOP Zach Collaros tore his ACL and was lost for the season. The Ticats stayed afloat for awhile, but three straight losses, including two to eventual division winner Ottawa to end the season, signalled the end of the 2015 season for the Ticats. Sure, the Ticats made the playoffs, but they were a mere speed bump to an eventual Ottawa-Toronto showdown in the East Final.

Hamilton was supposedly outmanned against the Argos. There was no way the inexperienced Jeremiah Masoli could win a quarterbacking duel with future Hall of Famer Ricky Ray. It just would not happen. Ray was to good and Masoli too bad for the Ticats to stand a chance.

Everyone wrote them off again.

Well, as is the theme, the Ticats paid no mind, and after a thrilling 25-22 win over the Argos, the Ticats find themselves back in the East Final for the third time in three seasons under Kent Austin.

Every year people have had a reason to write this team off and every year they find a way to get it done. They have been left for dead and cast aside numerous times during the last three season, but they always seem to find a way to make it to the final Sunday of the season.

That opportunity awaits them again this Sunday. The Redblacks will understandably be heavy favourites, and all the experts will once again write the Ticats off. The Redblacks may capture the East and play in the Grey Cup, ending Hamilton’s two-year reign atop the division, but this isn’t going to be a coronation.

History shows that you write these Ticats off at your own peril, and while Ottawa will head into the game the consensus favourites, no one should be surprised if Kent Austin and co. find a way to get it done one more time.[/b]

Excellent article Blogskeewee, great post. Regardless of what the oddsmakers say, I believe we are going into the east final on even ground with Ottawa. This game is anyones for the taking and I think we have more of that thing in your chest than the Rythym and Blues. 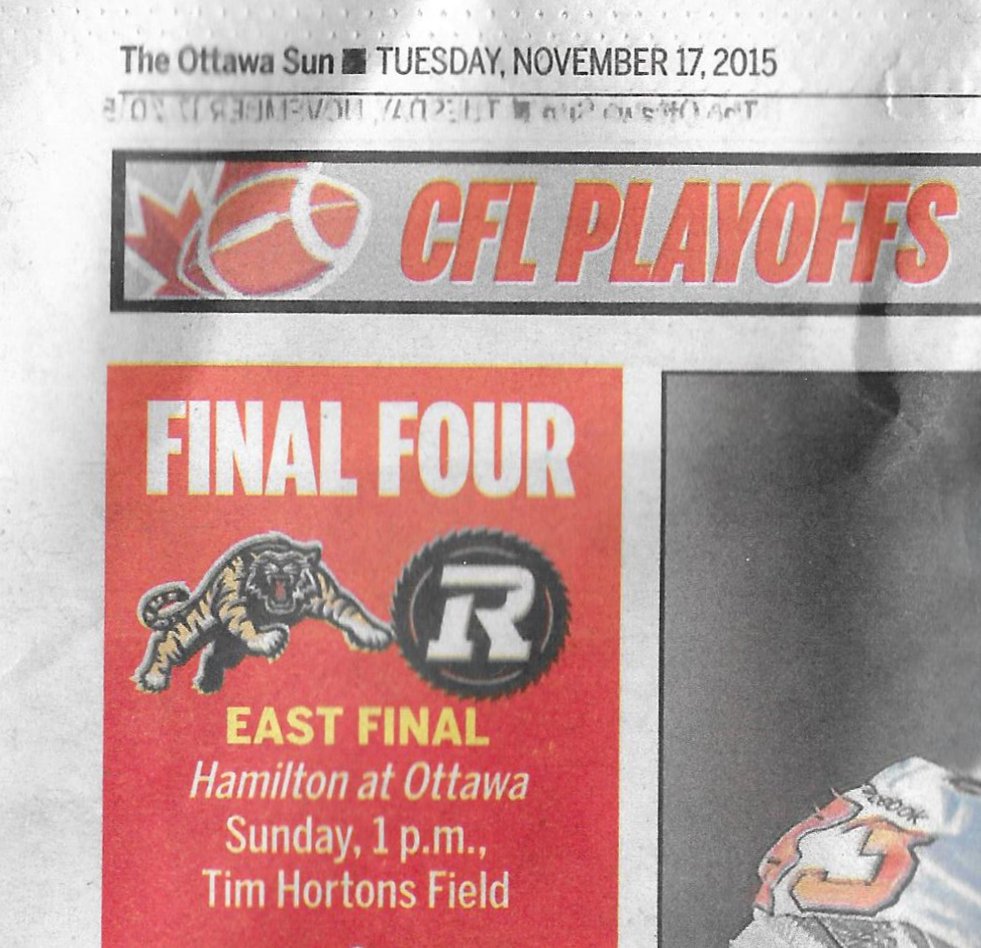 Great post Grover, I agree totally, Don't write the Cats off but I'm certain the media and TSN panel will be back at it on Sunday and by game time.

I would be very surprised if they don't pick Ottawa to win by 10-14 points over the Tiger-Cats.

Tiger-Cats it's Just more motivation to prove them wrong again!!

So they have Hamilton playing @ Ottawa but @ Tim Hortons Field?
It can only mean one thing. Ottawa has decided that THF is a better stadium than TDP and they are moving it there for Sunday's game!

6.5 against the bumcracks! i'll take those odds..

they know its a playoff game with Hank as qb?

I would like the Cats to win ,but I expect them to lose. I'm not a Dreamer.
I go into this game expecting a lose so I won't be disappointed if they lose and amazed if they win.

I agree GOTC but I thought the same thing last Sunday! Ottawa won't roll over so easy however.

After last week I'm optimistic here's why.... The confidence gained by masoli gables heating up banks is way over due and Medlock is money. My weird way of thinking.... We lost both games to Ottawa and both Greg cupswhich equals we beat them because hank has never won the big won and they never have played in a playoff game period as a whole they crumble under the pressure we go on and win the cup... 2 eggs of shoulders

I would like the Cats to win ,but I expect them to lose. I'm not a Dreamer.
I go into this game expecting a lose so I won't be disappointed if they lose and amazed if they win.

"The nice thing about being a pessimist is that you're constantly being proven right, or pleasantly surprised."

Good luck to our Ticats!!

This will be a monumental task to win this one. 3 major all stars missing from the lineup. Collaros, Norwood, and Sinkfield. The odds are stacked against us but this is the CFL where anything can happen. Oskee Wee Wee, go get em Cats!

Good luck to our Ticats!!

This will be a monumental task to win this one. 3 major all stars missing from the lineup. Collaros, Norwood, and Sinkfield. The odds are stacked against us but this is the CFL where anything can happen. Oskee Wee Wee, go get em Cats!

There is no official word on Sinkfield yet that I know of, and he may be a game day decision.
The TiCats are having a closed practice today, we may find out more on Sink at the open practice on Thursday.

The weather in Ottawa on Sunday is looking worse than expected now
It is now calling for 0 degrees, 40% chance of rain/snow and 25kph winds from the SW

This could be good for the Masoli/Gable ground game and could lead to "Bad Hank" weather conditions! :rockin:

After last week I'm optimistic here's why.... The confidence gained by masoli gables heating up banks is way over due and Medlock is money. My weird way of thinking.... We lost both games to Ottawa and both Greg cupswhich equals we beat them because hank has never won the big won and they never have played in a playoff game period as a whole they crumble under the pressure we go on and win the cup... 2 eggs of shoulders

I like it, it sounds good except for one problem, Hank has won the big one before - 7 years ago now albeit but he has the ring to prove it I am sure.

I do agree with your assessment as a whole though, this core group of guys who have been here with Austin since 2013 have been through the fire and back more than a few times and still we are back to back East Division champions. Hank has a knack for choking in big games, and Ottawa as a whole I feel may get caught up in the moment and I think may even be looking past us a bit which would be their greatest mistake.

One thing I have learned as Blogskee noted in his very well written article is that you just can't write the Cats off, ever. There is this spirit inside a Kent Austin team that just will never say die no matter the task at hand.

But as fans we should be happy, if you look on paper and our last few contests with Ottawa we really have no business heading to Winnipeg next Sunday, but hell I won't be mad if we do and for some reason I feel like we are about to shock the nation and ruin the feel good story of 2015.

Bad Hank has been eerily absent this year, I think he is about to make up for all the time he missed :cowboy:

I'm still looking for a TC win, but I think we all realize it will be an upset! But someone has to win, so why not the Cats!

Maybe a reason we haven't seen bad Hank is because Maas has developed an ideal game plan for Burris. Strong O line and "hurry up" style lets Hank throw quickly and with those receivers, go for the YACs. He has speed in Williams and good hands in Ellingson and Sinopoli, and sooner or later the DBs pinch in on the short routes and BOOM, the big play. Hard to get pressure on him, and its when facing heat, that bad Hank makes his appearance. Hurried Hank usually equals bad Hank.

I don't think the Ottawa D is all that strong (don't know their stats), but if their offence scores 30 or 40 points, they don't have to be. They can usually afford to give up 20- 30 points, and still pull out the win.

IMO we have to hurry Hank, try to keep their offence off the field, and look for tight zone or man to man coverage. Can give up 3- 4 yards per catch, but not 5 - 6, and never 30+. Let's hope Masoli and Gable can grind out some yards, with Tasker and Fantuz making up the big 2 down yards when we need them. Long bombs will be rare, so Grant will need to be on his game, and here's hoping Sinkfield can play!