So I got curious about these 2 photos, from a RoughRiders vs
Argos game many decades ago.

After some sleuthing, I think the quarterback #17 is Lamar McHan –
the guy who, in 1959-60, contended to be the starter in Green Bay
and eventually preceded Peter Liske as the QB in Toronto.

Is this the same guy ? Photo credit: Scott Grant Photography. 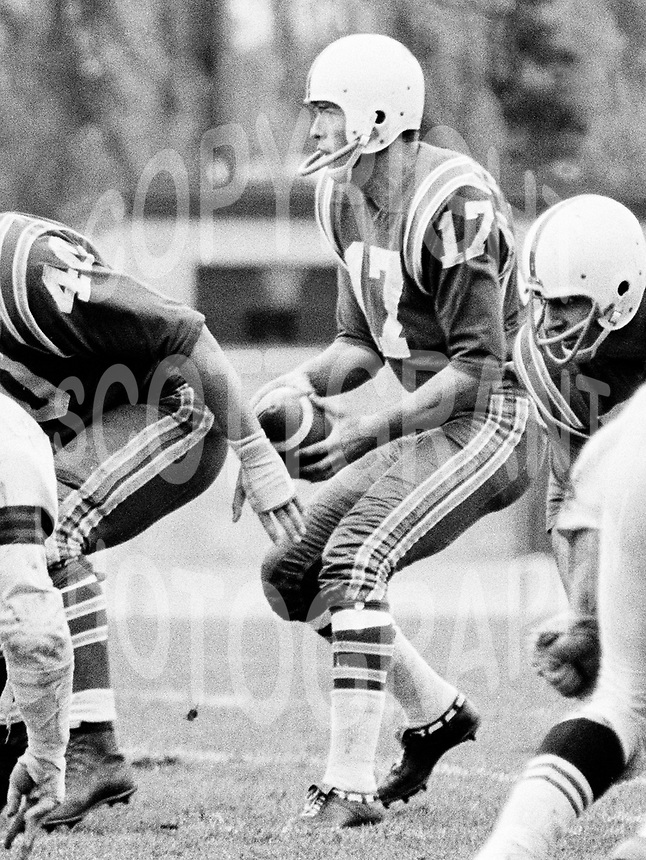 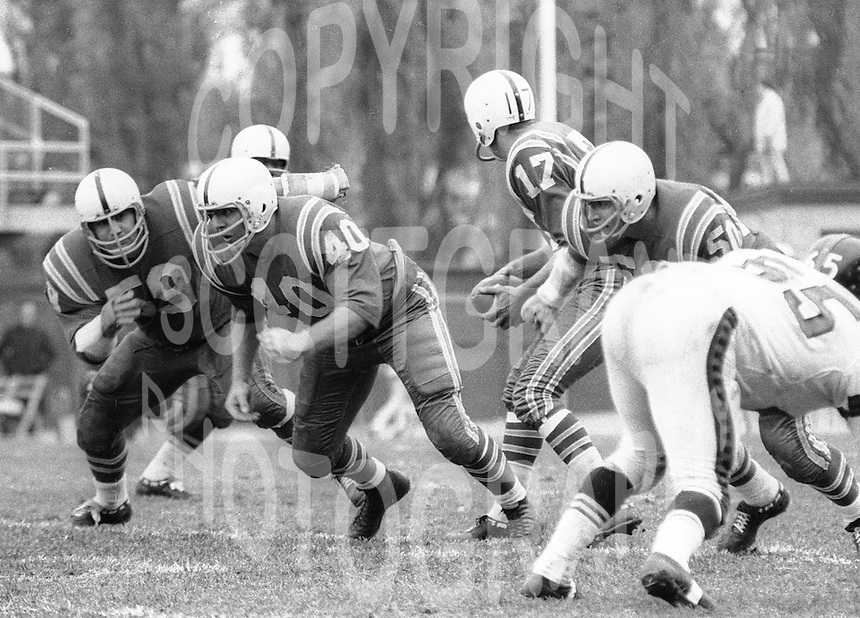 Cant help you, I was only a month old when this game was played.

We now think it’s Peter Liske after all, on Oct 24, 1965. He had
an inauspicious start to his CFL career, then got traded to Calgary.

It seems that both McHan and Liske wore #17 during the '65 season.

One thing I know for sure is the Argos weren’t very good back then. Liske wasn’t with the Argos very long but had a great career with Calgary. But I think this looks like Peter Liske.

I don’t think McHan played very much back in 65. Argos still had a long in the tooth Jackie Parker on that team. I believe Jackie was a naturalized Canadian by that time and spit time with a young Peter Liske. Other players who had become “Canadians” on that team were Dave Mann WR/P, OT/DT Billy Shipp and of course the great Dick Shatto at HB. I guess Pete Martin who was a rookie then I believe could fill in the roster, but names I remember as mostly Canadian starters would be Danny Nykoluk RT, Norm Stoneburg C, Ron Brewer LB, Dick Aldridge LB, Walt Balasiuk DT, John Vilunas DT, Pete Warren WR, John Wydraney DB, Mike Wicklum DB. Jim Copeland WR who is the father of our previous CEO was on that team. Ron Howell DB/WR as well.
Notable imports I remember would be Sherm Lewis RB, Larry Ferguson RB, Dave Thelen FB, Butch Laroue OG, Marv Luster DB, Jim Rountree DB, Bill Frank LT, Ed Harrington DE, Jackie Simpson MLB, Dave Pivec TE, Len Sparks DB. A couple of names I recall but I don’t know if they were Imports or Canadians would be Norm Nicola WR and John Atamian OG.
The Argos also had a back up import QB who played safety named Don Fuell and a Canadian QB Gord McTaggert. Don’t remember them ever getting into a game as QB.
I don’t believe the defense was all that bad, but they couldn’t score. Peter Liske sure lit it up after he got to Calgary but he had no deep threat with this team and the former stars Like Dave Mann, Dick Shatto, Dave Thelen were all past their prime. Boring HC Bob Shaw had a very boring offense and the crowds dwindled from a high of 28,000 to a low of 16,000 by season’s end. But they were the “good old days” and we won the Grey Cup, on paper, every June.

On August 6 1965, the Argos lost to Ottawa 17-14, and McHan was
the pivot. Click in the link below to find a news article about the game,
which has 10 instances of the text “McHan” (use the FIND button).

Search on “NFL Veteran Quarterback Lamar McHan his experience is key to Scullers’ offence”
to find the photo below, dated August 1 of that year – a year which wasn’t altogether ‘august’
(3 wins, 11 losses) and where McHan ended his QB days by getting cut after losing the first 2 games.