Whats old in your life

do you use things until they are no good, or do you replace with the newest thing in short time.

I still use the same manual razor I got 45 years ago.

I drive a 29 year old car because it drives real nice and only has 138k on it.

I have a lot of clothes from the 80s that are still good, if I lose enough weight.

I have one pair of pants from early 70s.

I had a nice jacket and a nice coat from the early 70s until my wife made me get rid of them a few yrs ago.

I still have my roller skates that I bought in 79.

I hate having to get new computers because they keep making software “improvements” that wont work on older ones.

These are a few of my favorite things

How is that even possible?

Obviously that is a “2nd” car or hobby car?

do you use things until they are no good, or do you replace with the newest thing in short time.

I still use the same manual razor I got 45 years ago.

Good stuff! I like to make things last as well. And consequently I never buy throwaway pens and razors. I buy refills for my existing ones. I still have Sheaffer pens from 1967.

I have a lot of clothes from the 80s that are still good, if I lose enough weight.

I have one pair of pants from early 70s.

I had a nice jacket and a nice coat from the early 70s until my wife made me get rid of them a few yrs ago.

I still have, and wear very occasionally, clothes that I bought in the late 1960’s.

Can you still pick her up?

These are a few of my favorite things

Some twelve years ago I refinished a set of three dressers and a writing desk that my parents bought in 1959. They have a much more attractive finish now than they did back in 1959 and they put a smile on my face every time I look at them.

I still have the Garrard SL95B turntable and Sansui AU-101 amplifier and speakers I bought in 1973. I still use the Hitachi FT-340 tuner I bought at Hi-Fi Express on Yonge Street in 1977.

Sadly in October I had to give up the 1973 Dodge Charger we bought new because it needed an engine rebuild and mega restoration I could not afford in the foreseeable future. I knew my old friend deserved to be resurrected so I gave it up to a colleague with both the know-how and finances to get it back on the road.

I’ll think about putting together a more extensive list.

I dislike buying new technology so I hang on well past due dates.,

I believe in quality lasts in a very few things but are expensive :

I went way out on the $ limb and bought a Mercedes Benz. 30 years later that is still my everyday ride.
For some reason Benz keeps that leather smell and you cannot beat the old sound system which only has a radio and tapes capabilities now, I never upgraded. I never wanted to pull things apart on her lest she feels disrespected.

Biggest saver is I deliberately do not gain weight. So things last and fit. And I love linen shirts which I own a lot of and wash infrequently helping them last. Dry cleaning is the way to go on those.

These were the pens we used between second and eighth grades from 1959 to 1965: 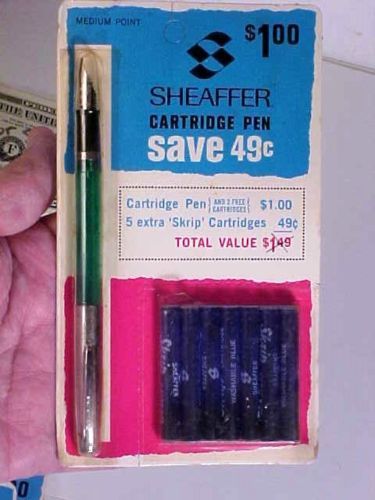 The barrels were transparent and rounded in shape like the bottom of a test tube.

I don’t remember what I used in grade nine at boarding school. Probably whatever ballpoints were sold at the school store.

Back in a public school for tenth grade, I went back to a Sheaffer cartridge pen but by this time in 1966 they had opaque barrels and I think the barrels were squared off at the end to the exact size of the cartridges so that all that was necessary to reload a cartridge was dropping the cartridge into the barrel and screwing the barrel back onto the tip: 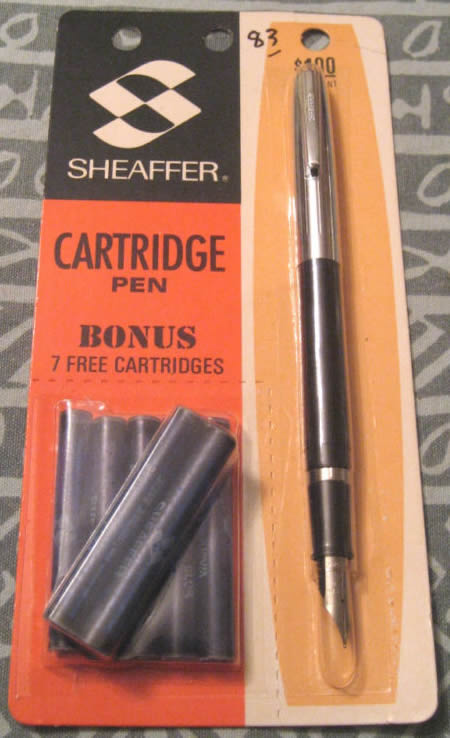 By the end of tenth grade I had switched to the ubiquitous BIC throwaways for regular use. By grade thirteen though I decided that an illustrious scholar such as myself should be employing a refillable ballpoint pen as a distinguishing characteristic. I therefore bought a Sheaffer ballpoint pen very much like the present day Sentinels.

Sometime between 1970 and 1976 during my university years I discovered that the Sheaffer cartridge pen which I’d used in grade ten and at odd times thereafter was no longer usable since years of heavy pressure had caused the nib to spread too wide. I bought another one therefore but I just put it away for future use.

During my years of generally gainful employment, I used whatever ballpoint pens were available at no cost as office supplies. Some four years ago though I decided to bring the Sheaffer Sentinel-type ballpoint pens that I’d used in my university years out of retirement for office use (and damn the expense of the very occasional refill)!

The Sheaffer cartridge pen I’d bought in university still writes but this morning I realized that the tip is probably a Fine because its line is too thin, even scratchy, for my present preferences. I may have to “invest” in a new one with a Medium tip. Now that I’m past retirement age I’ve decided that I’m old enough to be distinguished and write with a proper “fountain” pen.

I might now have to get a good fedora and walking stick as well.