What would the reaction be if a CFL player came out?

With the announcement today by one of the NFL top draft prospects - SEC Defensive Player of the Year Michael Sam that he is gay - the NFL may have its first active out player by next season. We all know there are already gay players in every major sports league but none have come out while active - and that unfortunately I think has had a negative impact on kids struggling with their sexuality - and probably makes it tougher for gay players in junior leagues or on college teams to come out to their teammates.

When will a CFL player come out - and what will the reaction be when he does? I can’t imagine it being the issue it would have been even just 5-10 years ago with the changes in society’s view on sexuality over the last few years. I hope it happens soon and I hope it does help end some of the bullying gay kids face - because kids put jocks on such a pedestal that an out CFL player could have a huge positive impact.

Nobody bats an eyelash over Jon Cornish having two Moms - so I’m assuming any out player would be welcomed with open arms by teammates, the league and its fans.

The reply would be "so what? Is it July yet?

This article from Grey Cup week 2012, when Cornish told the story of his family, includes John Hufnagel's answer to the question posed by this thread:

X3 If he can play ball and help out the team.....Then that's all that matters....end of discussion :cowboy: :rockin:

there'd be a couple "watch out in the shower" jokes and then no one but TSN would care...

unless it was an argo, in which case bristol board needs to purchased and signs need to be made....

Espo wrote:unless it was an argo, in which case bristol board needs to purchased and signs need to be made...

Good one argo. And I think there is a reason for a song like this from an American:

I Wanna Be A Canadian
| by Deborah Holland

Down here in the south ..only the media cares. Same will happen up there i suppose.

As a gay fan I think the reaction would be OK. I just wish we were at the stage where it did not matter as much as it does. One where gay kids growing up playing football weren't still having to hear comments like 'fuc*g Fagt' in the locker room feeling the need to protect themselves by hiding their sexuality or kids weren't still getting bullied and beat up because they are gay or where one of the largest causes of death of teenagers was suicide by gay kids - and unfortunately we are not there yet even here in Canada.. (Don't get me started on the horrifying things gay people face in places like Russia these days. There it is Hitler's Germany all over again where gays (like Jews) were vilified and eventually gassed.)

We're getting there but it is unfortunate all the existing gay players still feel the need to stay publicly closeted - even if out to their team. We routinely hear about players girlfriends or wives often shown seated in the stands cheering their guy on. I can't wait for the day when they show a player's husband in a very matter of fact way in the stands.

There is some great work being done by You Can Play and Get Real organizations but let's not kid ourselves we still have a way to go yet. Homophobia is still alive and kicking in locker rooms across Canada - but thankfully to a lesser extent than even just five or ten years ago. MLSE have been excellent helping on this problem. Brian Burke (because of his late gay son Brendan) was very involved with PFLAG (Parents and Families of Lesbian and Gay) when he was with the Leafs and MLSE even though Burke is gone is still very supportive of organizations like You Can play and PFLAG. In fact there is a PFLAG Night with the Raptors at tonight's Raptors game. https://www.facebook.com/photo.php?fbid ... =1&theater

We had a very good, open, honest and interesting discussion on this matter last spring when Jason Collins made his announcement.

Very glad to see Mr. Michael Sam (Great name for a LB btw!) come out & make such an announcement & take such a stance. Especially BEFORE the NFL Combine & NFL Draft! That takes guts! Here's hoping more feel comfortable enough to follow and do similarly.

I think that no one up here would give a damn. And that's how it really should be. Who cares about someone's sexual orientation? No one should, since it doesn't affect them. I don't care if a guy walks in arm in arm with the most stunning woman or a man that the women want to steal. I care what they do on the field and in the community. Love whoever you want.

Arland Bruce Twitter/instagram that is causing alot of commotion!
He has really overstepped his boundaries on this one
I guess all CFLer's aren't on board 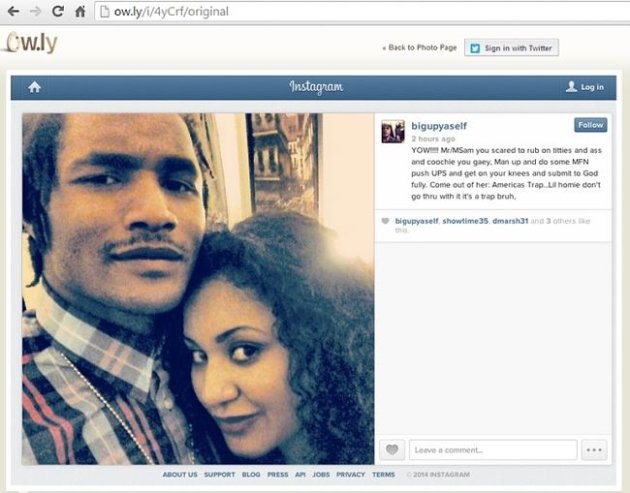 I would have a whole team of gay players over a classless piece of trash like AB3. I have to believe that the unfortunate beating he received in WPG left some permanent damage, otherwise he is a hateful jerk and that's sad. I would think someone who faced discrimination in their life would be a little more tolerant of others. I guess he is also a hypocrite. Very responsible of him to post that kind of garbage knowing full well that kids follow him. :roll: Well done.

For me this is a non-issue. It honestly blows my mind and I can't wrap my head around the fact that people use skin colour, gender, religion, sexual orientation and a host of other things as an excuse to promote hatred. I have never had to put anyone down for any reason to feel better about myself.

I am proud of this Sam kid. He did a VERY brave thing and it is definitely going to cost him. I support him 100%

Banshee, but what about Jehovah witnesses who knock at your door? This is their mission, to be public and aggressive. ABIII probably also sees it as his "God mission" to try and "help" people who have "waivered" from the "word". If you know what I mean. Sorry for the quotes, just saying that's how these people view their mission in life when they are into that aspect of their religion. They feel "called" I guess is the saying. I'm not saying it's right or wrong to be vocal and aggressive like that forcing your religion as it's not the way I see to do things but I'm not in their shoes and don't have their values. :?

Maybe he should be a minister of sorts for his parish in a more official capacity and leave football. I don't know.