CONGRATULATIONS TO AN AMAZING PLAYER AND HAMILTONIAN, ROB HITCHCOCK.
FANS THAT SAW YOU PLAY, HEARD YOU PLAY. THE ECHO OF THE HITS YOU MADE
STILL CAN BE HEARD IN THE WIND AT THF.

I have a suggestion, edit the Subject line to “Rob Hitchcock, Wall of Honour @ Tim Hortons Field”. (There is no apostrophe in Hortons).

I saw him deal out some mighty blows to opposition players and always thought he must be made of marble - really cut. My brother-in-law played goalie on his off season hockey team and said that while he was in good shape he didn’t look like an Arnold-type physique.

“Hamilton boy made good” would also be a likely title. 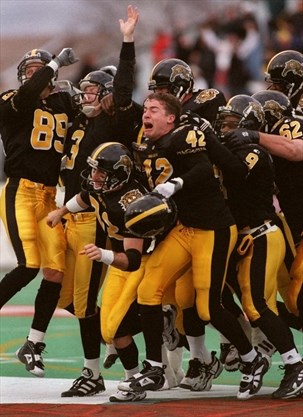 It’s not hard to see how much this East Division final victory over the Montreal Alouettes on Nov. 15, 1998 meant to Rob Hitchcock, No. 42, and his Tiger-Cat teammates. The victory sent the Tiger-Cats, who had gone 2-16 the year before, to the franchise’s first Grey Cup appearance in nine years. - Barry Gray,Hamilton Spectator File Photo 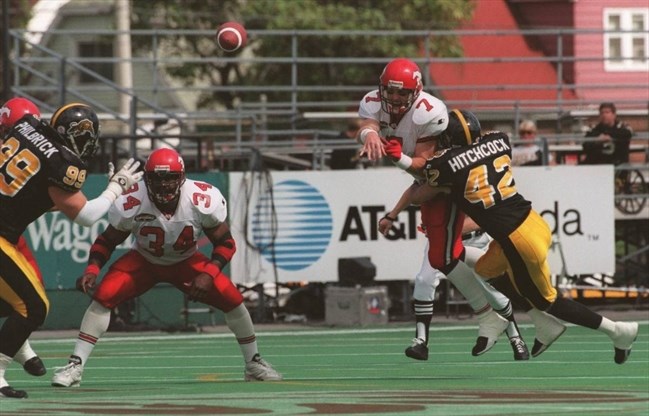 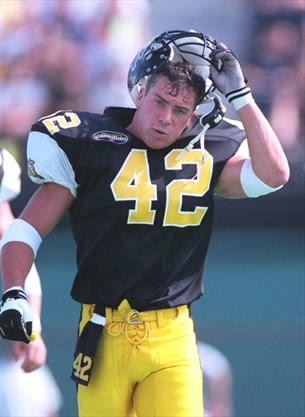 On Friday night at halftime of the game against the Edmonton Eskimos, safety Rob Hitchcock becomes just the 24th member of the Hamilton Tiger-Cats’ Wall of Honour at Tim Hortons Field. - Ron Scheffler,Hamilton Spectator File Photo 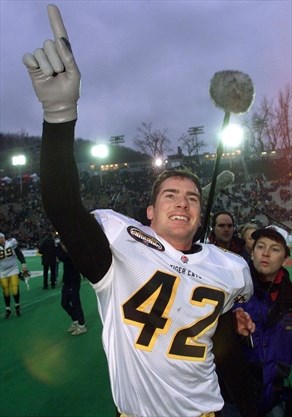 Hamilton Tiger-Cats’ Rob Hitchcock celebrates after beating the Alouettes, 27-26, in the CFL Eastern final in Montreal on Nov. 21, 1999. - Canadian Press File Photo
1 / 4
He looked like Hamilton, that special protective collar extending upward from the back of his shoulder pads, as if he were bracing for something a little extra difficult. Which he always was. That chiselled, proud face: Mount Rushmore of the escarpment.
He sounded like Hamilton: the hardness in his talk around the business of his life, football, the unapologetic thunder in his tackles, the softness in his welcome of newcomers to town. 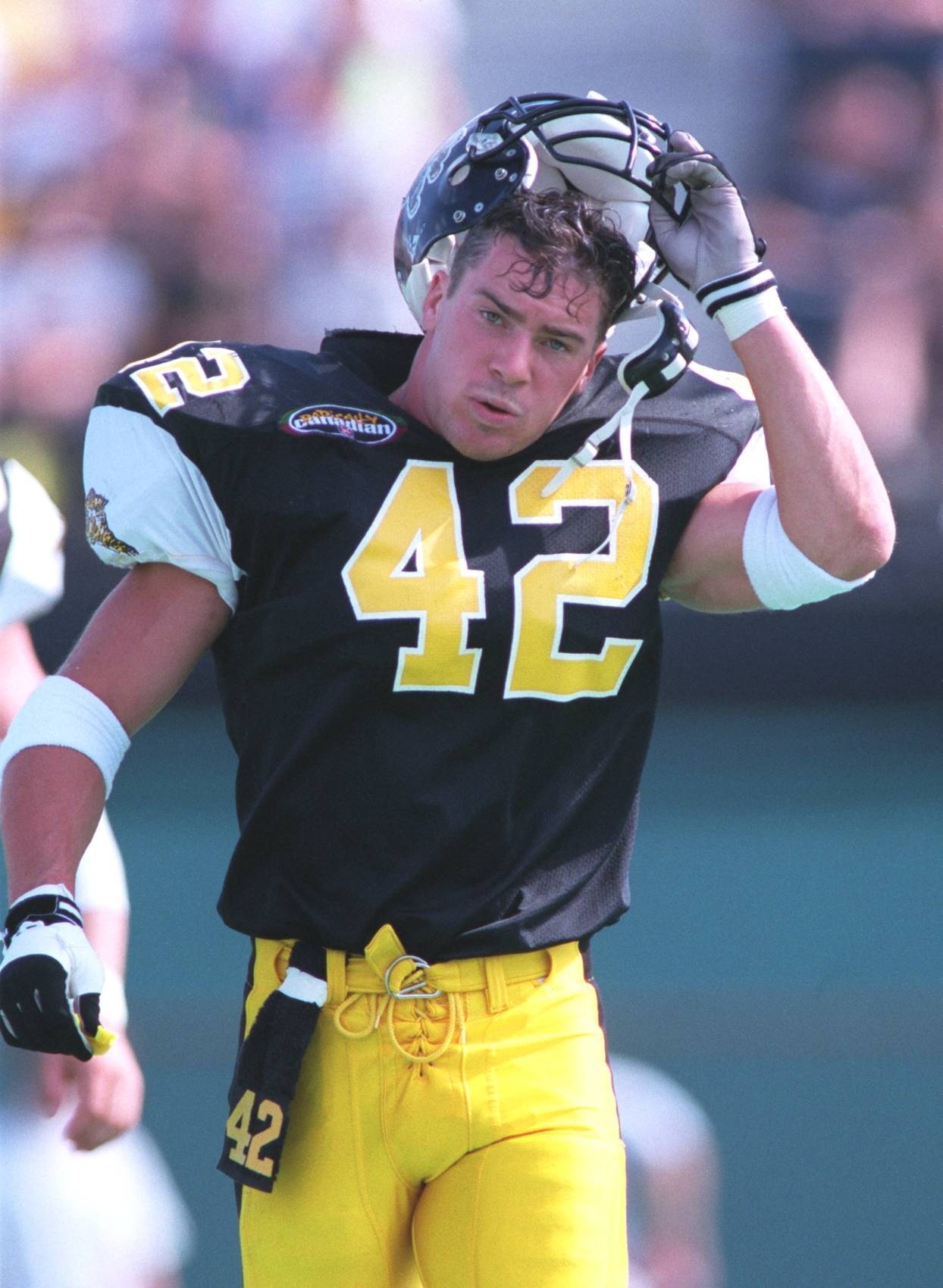 He was, and is, Hamilton, at least that part of the city — and it is huge and ancient — which intersects with the team that characterizes it as much as steel does. He was the local boy who learned the game at Glendale, learned some more south of the border at Weber State, then came back home to be drafted by, and play a dozen seasons for, the team he had worshipped as a kid.
Friday night at halftime of the game against Edmonton, safety Rob Hitchcock becomes just the 24th member of the Tiger-Cats’ Wall of Honour at Tim Hortons Field, and the math says it’s harder to make the Wall than the Hall. More former Ticats are in the Canadian Football Hall of Fame, located only a few metres away, than are on the Wall of Honour.
Hitchcock played for the Ticats from 1995 to 2006, is the all-time franchise leader in total tackles, had his defensive tackles record surpassed only this year by Simoni Lawrence, and is second with 36 career interceptions. He also muscled through much bigger blockers to make 11 quarterback sacks.
“My game was the same as Hamilton is,” Hitchcock agrees. “It’s a tough city and a great city to live in. I had an edge on a lot of the guys because I grew up watching the Ticats. My parents had season’s tickets and just to see the tough Steeltown fans who were pretty crazy — it’s more family-oriented now — really had an impact.”
At six-foot-two, 210 pounds, Hitchcock wasn’t small but he played even bigger and tougher than he was.
“A lot of it is in your head and in not being intimidated by a bigger player,” Hitchcock says. "There weren’t that many receivers that were bigger than I was, but blitzing and hitting 300-pounders, I was never afraid. I never changed my speed whether it was a 180-pounder or 300-pounder.

“It’s just the way I always played, it’s what I learned from Dennis Griffin and Ed Turek, my coaches at Glendale. I really didn’t know any different and I remember the first hit I made in Grade 10, felt really, really good.”
Hitchcock concedes that if he were playing today, with the strict rules against contact to and by the head, he’d have to adjust his approach. He says he never headhunted or targeted players but defensive players would react quickly and charge into the fray and “just throw your body at the ball carrier to make the play.”

RELATED:
Steve Milton: Current Hamilton Tiger-Cats are similar to the 1999 team but haven’t won a Grey Cup yet
Ticats legend honoured: From the Hall to the Wall
He was named to the Wall back in April and says its significance has grown even stronger since then.
“It didn’t really sink into me when Mr. (Bob) Young told me, until I started seeing some of the inductions across the league including Ricky Ray’s last week in Edmonton. Then it really hit home, how big it is. It’s real now.” 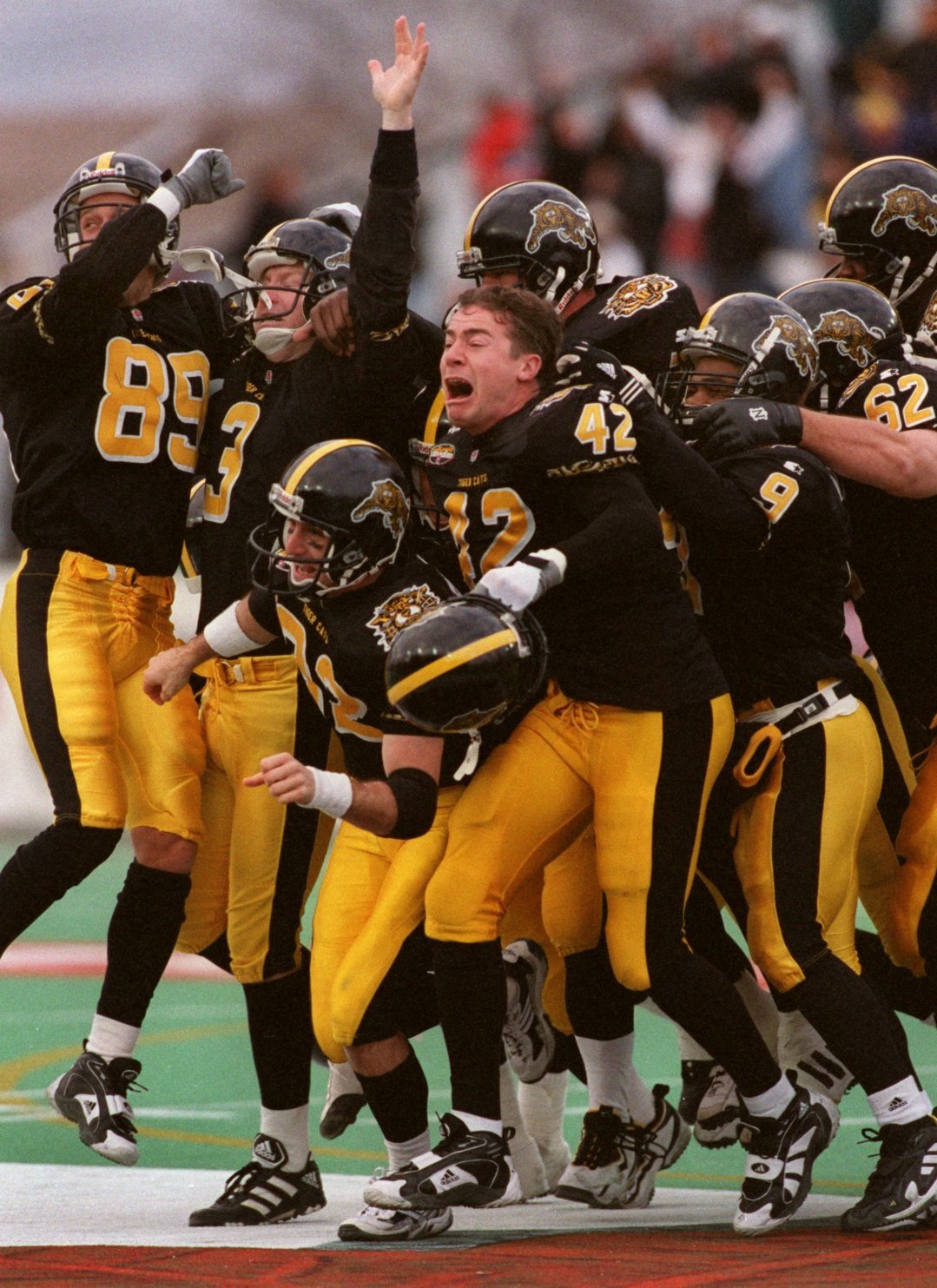 Members of the Hamilton Tiger-Cats celebrate their last-second victory over the Montreal Alouettes on Nov. 15, 1998. | Barry Gray/The Hamilton Spectator file photo
It’ll get even more real Thursday when up to 30 members of the 1999 Grey Cup team — the last Ticat bunch to capture the battered beaker — gather for a dinner at Tim Hortons Field followed by a roast of Hitchcock. His wife Michelle, children Ava, 15, and Matt, 13, mother Jeanne, sister Joan, and brothers Paul and John will all be there Friday for what will be a moving tribute to his career accompanying his induction.
His father Phil, a longtime broadcaster at CHML, died six years ago but his presence will be strongly felt during the ceremonies. It was Phil who called to his son to joyfully report that the Ticats had selected him 17th overall in the 1995 draft. Hitchcock had been worried because Saskatchewan had told him during the CFL Combine that they were going to take him in the first round but they went with lineman Rob Lazeo, leaving the Ticats open to select the pride of Glendale.
“It’ll be a pretty emotional day for all of us because my dad was my biggest fan,” Hitchcock says. “It’s a dream come true to play in your hometown, and then make the Wall of Honour.”
Over the years,many American players including Joe Montford, who’s on the Wall too, have spoken of how Hitchcock was the first-responder guide to not only his hometown but to Canada.
“I didn’t know much about Hitch before I went to Hamilton,” said receiver Darren Flutie, who arrived with Danny McManus from Edmonton in 1998 and will return for Thursday’s festivities for the first time in 15 years. "I thought he was just the typical, tough, Canadian free safety. But I got to know him and how versatile he was. He was the centre that group of they had in Hamilton like Ozzy (Paul Osbaldiston) and (Mike) Philbrick who had played there for a while.
“Led by Hitch, they made it so Danny and I could fit in so early and so easily.”
Orlondo Steinauer, who was a star cornerback in the secondary with Hitchcock, and now coaches a team that has many similarities to the 1999 group said, “Rob was a great teammate. He was an enforcer in the middle and he held us all accountable.”

The Pride of Glendale to become 24th member of Tiger-Cats Wall of Honour.

Blast from the Past! Victory for the boys.

I remember being in the stands at BC Place - the look of silence on the Stampeders’ fans.

That was an amazing victory for us. The 13 year drought ended.

Congrats to Rob Hitchcock, he deserves it!

Thanks Dork. I thought it was in the 80’s. Either way, a great hit.

I was at that game as a young lad and remember that mythological impact.

It was Tyree Davis and I was also at that game. That hit was literally right in front of me and it sounded like a gun went off. I believe it was in the Fall of '01. I remember listening to Russ Jackson on CHML on the way home ( he was doing colour commentary on radio back then) on the 5th Quarter and he openly said that he was not going to talk about the Hitchcock hit because he felt it was too violent…

The slobber-knocker hit on Davis occurred on Sept.30/2001. Welder you win the prize.

The slobber-knocker hit on Davis occurred on Sept.30/2001. Welder you win the prize.

Was at the Rob Hitchcock roast last night. What a fabulous night. It was great to see so many of the '99 team in attendence and share laughs and hear stories. Also very nice ro see Masoli and Tasker there to enjoy the evening. Congrats to Rob on a well deserved honour.

While I have no personal recollection of him, I have a feeling Hitchcock was one of the main reasons why Glendale always kicked my team’s butts back in the 80s.

Congratualations to Rob Hitchcock
A great CFL Career
On a personal note, I remember Rob when he was 7 years old, as I was his Hockey coach at Rox Park Minor Hockey. He played on my team for a couple or years down at the old Double rinks on Barton back in the mid 70’s. I use to tie up his skates for him.
He was a good kid and a good little hockey player. Happy to see the success he has had.

There was a certain amount of acrimony when Hitchcock and Morreale were released. Scarcely a word about it now.
Time heals all wounds.

Great to see so many of the 99 Champs come back for the special occasion and catch up on what
they are doing now and where they are now living.

Many of these guys had not seen each other since 1999 and each player was really happy to see
their former team mates again !!

It was very obvious that the real team leader on that Grey Cup team was MLB Calvin Tiggle.

Several players mentioned that Tiggle had complete respect from all his team mates, and
whenever he had a message to say to his team mates they would all listen to him intently !!

The after dinner roast made a few people squirm with the stuff that was said, but hey, that is
what roasts are for !!

All in all a great entertaining night for sure !!

Thanks for sharing the story Tipper.

Nice of Masoli and Tasker to be in attendance. Maybe in 20 years they will get their own 20th anniversary Grey Cup dinner.

8)Yes Krisiun, wouldn’t that be great for this team to win the Cup on the 20th anniversary of the
last Cup victory !!

And you are welcome, Krisium !!