U of Montreal VS McMaster Vanier Cup

This game will be televised tomorrow at 1PM EST. The game has been sold out at Molson Stadium in Montreal. U of M has a passer of note named Cousineau who threw over 400 yards in the Eastern Final. I would believe there will be a few players, of note, whom we might see in the CFL next year.

This game will be televised tomorrow at 1PM EST. The game has been sold out at Molson Stadium in Montreal. U of M has a passer of note named Cousineau who threw over 400 yards in the Eastern Final. I would believe there will be a few players, of note, whom we might see in the CFL next year.

Yup - huge weekend for Hamilton football fans. It will be a GO MAC GO! Saturday and OSKEE WEE WEE Sunday. Last weekend we got both games here in Hamilton with Mac winning Saturday at Ron Joyce and the Cats winning Sunday at THF. This week I'll be glued to my TV hoping they can win away from the Hammer.

I'm sure tickets are priced below what the Als charged for their playoff game.

But hey, in the US the NCAA is a huge competitor for the NFL, that we know, and we know high-end programs in the NCCA generate more revenue than some small market NFL teams.

I Agree, the Canadian National University Championship gets its own thread on the main board for the big game.

Good and smart on The Als organization to host such a game. Especially since the stadium has been upgraded and Montreal sits very nicely centered with a great chance to have both or at least one coming from the OUA or Q where people can make the road trip.
Having the game at a newer/reno'd CFL modern stadium is a nice place to upgrade the CIS Championsip game. with the Connections that Ottawa and Hamilton have with the CIS programs in their city you can bet this will become a hot bid for these clubs to host the Vanier Cup.
With the OUA and Q looking at having some interlock games, CFL clubs and TSN will be looking to be involved in using the bigger and newer venues. TSN will look to get a contract for a block of these games since Sportnet seems to have little interest. All which will bring the CIS up to a lil higher level for National attention for football. It is not going to hit the NCAA level but what the heck does, not too much.
Money made which could be used to expand the National playoffs to get the best 4 teams a better chance at the semi final games, which could grow the attention on those games, as well as better chance to get the best two teams into the Vanier Cup should they happen to be from the same conference.
Potential is there for football for the bigger and better funded football programs. With basketball becoming much more popular in Ontario and the Atlantic region. Smaller schools without big time football programs could better be big time basketball schools.

Really nice seeing some fresh( ish) blood in the
Championship. no dog in the fight since Calgary is eliminated. still gonna watch and hope for a good game

Molson stadium's first sell out since the expansion.

Its not positive.. Its not negative.. Its ironic really.. All of the critics said that this expansion was not for the CIS , but for the CFL and as we know, almost everyone is against public money for pro sports teams... Then there was the whole news story a few years a go about how the Als lied about their ticket numbers, to get the funding... Turns out the Als only need 15000 seats but the Cariban need 25000... Lol

Toronto should be touting the Vanier for BMO Field and try and get funding for Phase III for it to be able to host the Vanier Cup, and Grey Cup as well of course. Maybe that's what is going on behind closed doors though.

Anyway, nice to see a sellout, I'm sure ticket prices were priced properly and at a decent price point unlike the Als game. And many will be students with quite low prices. Went on Ticketmaster and the price range starts at $15, probably the student price.

Found this on the web:

Went on Ticketmaster and the price range starts at $15, probably the student price and I'm sure at least half the stadium will be students.

Molson stadium's first sell out since the expansion.

Theres still about 500 seats left on ticketmaster. Go check right now you can buy them. All crappy seats in the corners.

So not sold out yet. But with a decent walk up crowd it should sell out.

Looking forward to this game,should be a good one,bring it back to the HAMMER !!! GO MAC GO :thup:

Twin Peaks Weekend in the Hammer..Go MAC..Go CATS right to the top of the Mountain 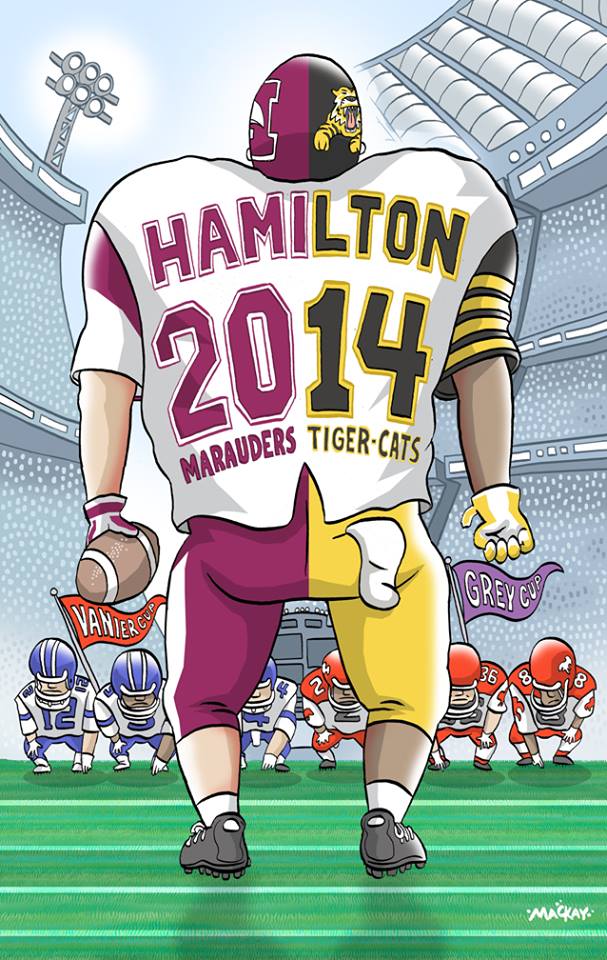 Mac is in tough with Montreal REALLY taking advantage of being the home team this week.

When the McMaster Marauders arrived at Percival Molson Stadium for their final Vanier Cup walk-through at noon on Friday, the Mitchell Bowl champions found an unusual challenge waiting.

Three huge white tents had been erected on the field on top of newly-painted logos. The structures certainly made running any kind of passing or kicking drills difficult.

"I don't know what's going on here," says receiver Ben O'Connor, who'll be playing in his third national championship game on Saturday and hasn't seen a situation like this before. "It's a little embarrassing, I think. I don't think it's acceptable."

He was also referring to the fact that when the team arrived, the field hadn't been cleared of snow. So the Marauders' coaches had to grab shovels and start clearing it off before any work could be done.

These are just the latest obstacles those around the team say the squad has faced this week while preparing to play University of Montreal in their own back yard. This has lead to a growing sentiment in some corners of the Mac camp that the Vanier Cup welcome wagon didn't quite make it across the Quebec border.

"The evolution of this game and the hosting of the teams coming from out of town has changed significantly since 2012," says head coach Stef Ptaszek.

That sounds like his diplomatic way of saying what many of his players and staff — and a number of folks from other universities who are here for the game — have been saying quietly and usually off the record. Home-field advantage is going to be just that.

Several days ago, Ptaszek was already telling a Toronto radio station that the relative demands placed upon his players have been unusually heavy.

In 2012, when the game was in Toronto and Mac was essentially the home team, they were required to be in Toronto at the official Vanier Cup hotel for several days before just as Laval was. When the two teams practised, they had to do so at the same locations under the same conditions.

Yet while the Marauders' players had to stay in a hotel and practise where they were told this week, Montreal players practised on their home field, ate their usual food, prepared in their usual manner and slept in their own beds.

"It's been a different situation," says cornerback Joey Cupido.

On Friday, while Mac was working around the tents — on the field both teams were supposed to use on this day — the Carabins announced at the last minute they'd be practising at an indoor facility on their own campus and at a time later than was prescribed.

In previous years, meals were looked after for both teams. On Friday, it was Ptaszek and his coaching staff carrying boxes of food into the hotel after the workout for the players. Staff has been working all week to arrange meals.

And several folks who attended Thursday night's all-Canadian dinner that celebrates football across the country described it as something approximating a Carabins' pep rally. Even as Ptaszek and other Mac folks sat right there. It was vigorous enough that some say it was awkward.

On top of everything else, attendees said McMaster's three second-team all Canadians were overlooked, making them the only three such honourees not to be introduced and acknowledged at the function.

It took CFL legend and McMaster grad Russ Jackson to rise up and say some words about his alma mater to turn the tables a bit.

In the end, Mac is already an underdog that's going to be playing against a very, very good Montreal team in front of 23,000 of their loud, blue-clad fans. Having their visit turned into an adventure probably hasn't made things any easier.

Ptaszek credited director of athletics Glen Grunwald and the team's staff for making sure everything has been as comfortable and looked-after as possible. And the players say they aren't going to let the slights, real or perceived, bother them on the field.

"It's just a bit of motivation," receiver Max Cameron says. "But we were motivated already."

I'm sure tickets are priced below what the Als charged for their playoff game.

But hey, in the US the NCAA is a huge competitor for the NFL, that we know, and we know high-end programs in the NCCA generate more revenue than some small market NFL teams.

What, no rosters on the CIS website? That's sad. :thdn: