He made an outstanding first(and 2nd) impression! :rockin:

TIGER-CATS SIGN WIDE RECEIVER TYMS TO A CONTRACT THROUGH 2018

[i]The Hamilton Tiger-Cats announced Friday that the football club has signed international wide receiver Brian Tyms to a contract that will keep him with the team through the 2018 CFL season.

Tyms, 27, joined the Tiger-Cats late last season on October 24, 2016 and played one regular season game, his CFL debut on November 5 against Montreal, posting four receptions for 33 yards and a touchdown. He also suited up in the Eastern Semi-Final versus Edmonton and led all receivers with eight receptions for 114 yards in the game.

The 6-3, 204-pound native of Kent, Washington, attended training camp with the National Football League’s Indianapolis Colts before being released with an injury settlement on August 5, 2016. Prior to that, he appeared in 18 career NFL games (two starts) with the Cleveland Browns (2013) and New England Patriots (2014-15), registering seven receptions for 94 yards and a touchdown.

Tyms saw action in one postseason contest in 2014 and was a member of New England’s Super Bowl XLIX championship team. He also spent time with the Miami Dolphins (2012-13) after originally signing with the San Francisco 49ers as an undrafted free agent out of Florida A&M University on May 4, 2012.[/i] 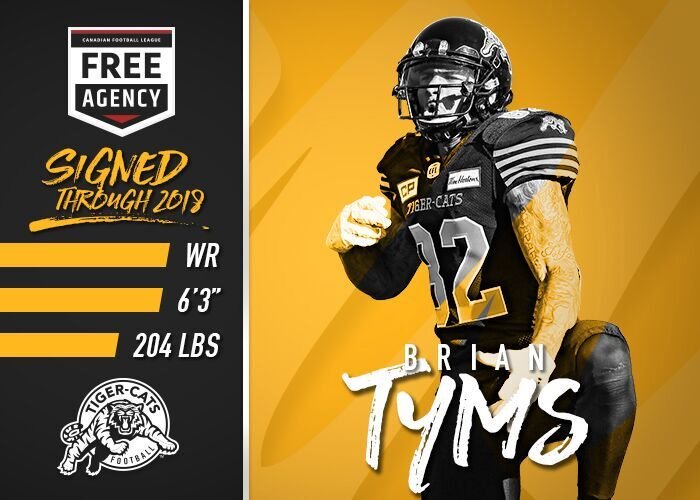 Wow, good signing. If the kid can keep up his production from the small amount we saw of him last year he'll be an all-star.

He was currently under contract.... just an extension.

Tyms showed well at the end of last season.

With uncertainty regarding Andy and Sinkfield, a helpful insurance policy.

Great signing. If we can get Sinkfield on board, we are set at receiver.

Great signing. If we can get Sinkfield on board, we are set at receiver.