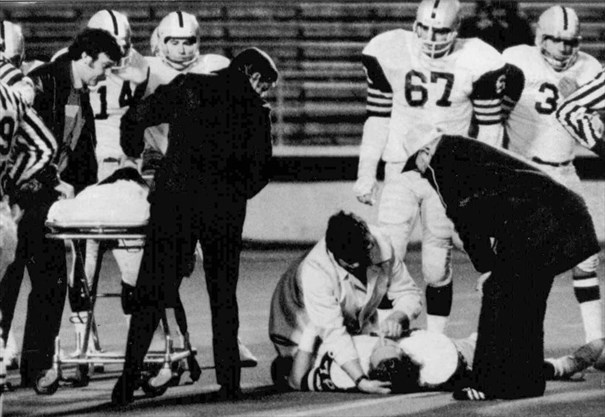 Hamilton rookie went down in a 1975 game in Calgary. He never got up.

I was 13 when I lost my father. Not the same as losing a big brother but I can certainly empathise with what Tom’s young brother Jeff went through. It sounds like he has turned his life around and I am very pleased for him.

Steve Milton: The story and legacy of Ticat Tom Pate circles 44 years later
Hamilton rookie went down in a 1975 game in Calgary. He never got up.
Sports 02:38 PM by Steve Milton The Hamilton Spectator

CALGARY — It happened 44 years ago, in the same stadium where Sunday’s Grey Cup will be played, but the tragedy continues to resonate. Through a league and, especially, through a family.

Hamilton Tiger-Cat Tom Pate, a 23-year-old linebacker in his rookie season with the Hamilton Tiger-Cats, was felled by a clean bock from Calgary Stampeders’ Rick Galbos on a touchdown run, and struck his head on the turf. As the teams prepared for the convert attempt, Pate went into convulsions and lost consciousness.

Three days later, at 7:20 p.m. on Monday Oct. 21, 1975, Tom Pate died in Calgary Foothills Hospital. His parents, Art and Dorothy, one of his sisters, his girlfriend, Cindy, and the family pastor were at his bedside.

His 13-year-old brother Jeff was at home in Omaha, Nebraska.

During Thursday night’s CFL Player Awards ceremonies — one of the cornerstone events of Grey Cup Week — the CFL Players Association will honour the 45th winner of the Tom Pate Memorial Award, given to the player who has shown outstanding sportsmanship and community service. Previous winners include five Ticats: Kevin Glenn, Marwan Hage, Danny McManus, Mike Morreale, and Henry Waszczuk.

When the Tiger-Cats qualified for the Grey Cup by beating Edmonton Sunday, one of their guests at Tim Hortons Field was Jeff Pate, the first member of Tom’s family to ever return to Hamilton since that terrible day.

The 2004 Grey Cup in Ottawa, where he helped present the award named for his brother to Barron Miles — like Tom, a college star with the Nebraska Cornhuskers — was, Jeff says, the only time a member of the family has been at the awards ceremony.

“I remember him just faintly because growing up I didn’t see him that much. He was always away playing sports,” Jeff says of Tom. "But I remember going to his games all the time and I remember that he always called me, ‘You big weenie.’

“(Tom’s death) was a tragedy that sometimes tests your will, your belief in a higher power. Acceptance is hard. I think it traumatized our family. We’ve never come back up here. I don’t think my parents ever fully recovered. We’ve had lots of problems.”

Pate freely offers that there were problems with alcohol. He has been sober since a stint in jail “got my attention” four years ago. And although he won’t blame his older brother’s death for his own issues, he knows something took root.

“One thing led to another and I think at 13 I was pretty traumatized,” he said. “Looking back, that was probably the start of becoming unaware. My parents did the best they could under really hard circumstances.”

The Spectator reported, even before he died, that Tom Pate was not going to survive and that the players on the field had already sensed that inevitability as he was being attended to in the end zone. The paper later reported that he’d had headaches prior to the game and had died of a brain hemorrhage but that it could not be positively determined if it was directly related to the on-field injury.

A University of Nebraska spokesperson also told The Spectator that Tom — who played for the 1972 national champions — had been unconscious after a similar play in Nebraska’s second game of 1974.

Jeff says that after Tom had been knocked out in a 1974 game (it’s not certain if it was the same game the university referred to) and “didn’t know where he was” during a national TV interview with future broadcasting superstar Jim Lampley, his concerned father had tried vigorously to get him to quit football. The next year, he died on the field.

“That IS tragic,” Jeff nods.

In the no-degrees-of-separation world of football, Jeff Pate, who played five years for U of Nebraska Omaha Mavericks as a punter, grew up with John Wynn, father of current Tiger-Cat defensive tackle Dylan Wynn. They are still best friends and were at Saturday’s game together. Jeff wanted to go to the Grey Cup but had prior commitments.

“I didn’t know much about the Ticats and when John told me (Dylan) was playing for them I thought it was my opportunity to get to find out more about Hamilton, and I’ve been following it more,” Jeff said at Sunday’s Eastern Final.

“It makes me proud my brother was a Hamilton Tiger-Cat. And that he died doing the thing he loved to do, which is play sports. If he had to die, what a better way to do it, instead of a car crash or cancer.”

On Saturday morning, Jeff went to an AA meeting in Hamilton and told his story.

“I kind of broke down a tad,” he said. “I knew it was going to be emotional. Being here and being around the players and hearing the enthusiasm, makes me feel proud to be able to enjoy the experience without having anything in my system to prevent me.”

And he was fully aware that Tim Hortons Field sits on the same site as Ivor Wynne Stadium, where his brother played.

“I feel a presence,” he said. “I believe my brother wants me to experience this. He — and my higher power — want me to be here.”

The solid acrylic trophy is a pretty cool HOF piece. It was on display in the open and could be touched by visitors for years.

Great article. I previously was looking for more info on Tom Pate.

Very moving story. I feel bad that I didn’t know this history.

Great piece of writing by Milton. Five decades of a family’s story all tied to that one tragic event.

Thanks for posting this. I attended the player awards this year, had no idea the back story to the award. So touching.