While waiting for the depth charts to be published, some interesting news out of Ottawa. Mossis Madu, who hasn’t carried the ball, or caught the ball, once this year will be the RedBlacks’ running back this game, replacing William Powell. That, and more interesting comments, in this radio interview with Jeff Avery, the long-time colour man on Ottawa football play-by-play broadcasts: 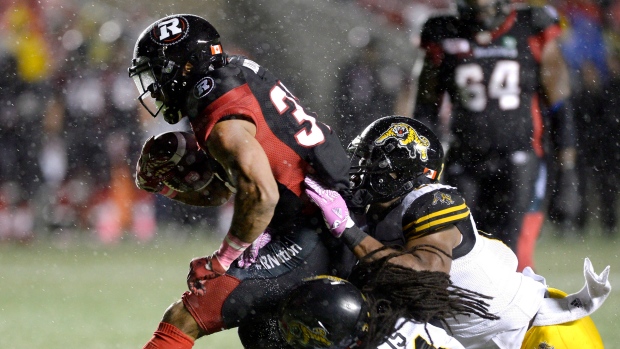 Avery: Starting Madu has everything to do with running style

TSN Redblacks analyst Jeff Avery on the change at running back, an angry Ticats team and Brandon Banks out of the line-up.

Other news from Ottawa media:
One of the RedBlacks’ best special team players, linebacker Kevin Brown will be back from their 6-game injured list, and A.C. Leonard, who started at DE last week, is likely out for the rematch.

Greater changes for Ottawa – different starters this week @ all 3 LB positions, DE, CB, and S on Defence. Also, although not showing on their depth chart, is the reported change at running back.

I’m getting the same vibe I got after the BC game. I think Ottawa is coming into this game way over-confident and thinking that they’ve already won the division, and is already looking ahead and preparing for the playoffs.

Today, I expect them to lose. In other words, they will most likely win.

I’m getting the same vibe I got after the BC game. I think Ottawa is coming into this game way over-confident and thinking that they’ve already won the division, and is already looking ahead and preparing for the playoffs.

Hope you are right ED. I am nervous about this game, wondering if the Cats go in maybe thinking this one and the Montreal game are good tune-ups for the ESF. If nothing else, that will be the case for Sinkfield.

Going to need a big game from the defence, especially against the short dink passes to Sinopoli and Ellingson. Keep them second and long, and get pressure on Harris.

Maybe this will be the game that bursts Ward’s FG bubble? The football gods owe us big time against this team :)!

I highly doubt anyone is going into this game thinking about the East Semi. If they are they should not be pro football players.

With a win today and a win at home again next week against MTL we would be 5 and 1 in our last 6 at home.
(with our only home loss at the hands of CGY who were playing very well at the time)
Hosting a playoff game with a strong home record to finish the season bodes well for us.

Now we need an OTT 2 game losing streak before they go into their playoffs!

We will win, cause this game doesn’t really matter much…but of course, we choose to win over losing anytime.

I believe the Cats need this win just not for a chance at first as slim as it might be but also just so they can get some confidence that they can beat them when it counts in the play-offs. Come on Cats let’s go get them. Have to miss the first half but will be watching the second half.

Gonna be an ugly, cold, garbage weather, no crowd BMO kinda game. Not sure if that helps us or not

Sure hope it’s Johnson and not Cooper starting for him. …

An opportunityat redemption for Cooper, who was burned all over the field in his last start.

That should mean a big day for Ellingson – a 1000 yd. receiver who caught 3 for 34 yds. when Breaux played a full game in July, and 5 for 59 yds. last week when Breaux was out for at least a quarter of the game.

I’m sure the club expected Breaux wouldn’t play and managed, with the help of the local media, to keep it quiet until the last hour.

Sure hope it’s Johnson and not Cooper starting for him. …

Or maybe flip Leonard to Breaux’s corner and insert Johnson at halfback. . .

Or maybe flip Leonard to Breaux’s corner and insert Johnson at halfback. . .

Or maybe we can slip Breaux’s number #24 jersey on Cooper and or Johnson and hope to Hell that Ottawa doesn’t see the difference . :o