Sounds like Fontana may be out for a while and they value Woodmansey more at the guard position.

Just two more trades and our O-line can become the 2021 EDM O-line in its entirety.

and where is Edmonton in the standings

So we now have 4 of the top 13 highest paid OL according to this list. Two of which were acquired from Edmonton this year.

So in theory, we should have 4 pretty good OL men.

Clearly, the team is trying to, and has been trying to fix the OL. We should probably put that complaint to bed for the time being.

It is pretty safe to assume that this trade implies the following:

Final comment . . . looking forward to next year, when Alex Fontana returns to the active roster & IF Chris VanZeyl decides to come back for "one more kick at the can", the 'Cats are going to have a wealth of Canadian O-Linemen in Camp next year !!

I wunder if the Cats management is starting to realize that something is wrong with the offensive line , after their 3 quarterbacks get injured . Interesting.

The Oline has been good the last 5 games. It's football injuries happen. The BC Lion's have the best pass blocking Oline in the league and Rourke and O'Connor got injuried on two rare plays.

I agree - I want to see how Dane performs when he's protected. Then he can be judged on his performance.

So excited to have a improved O-Line!

He's been protected the last couple of games.

What I find interesting is how and why the Cats decided to part with Jesse Gibbon. He was the 2nd overall pick in the 2019 draft so expectations were high. They must not have been happy with the trajectory of his development after 3 years.

Hervey was the GM that selected Beard for the Esks in 2015 so he might have had an influence in this trade.

He's been protected the last couple of games.

I am guessing CVZ will certainly be out for Mondays game and the team can use his cap relief to add Beard.

Interesting. Here's the article I presume to be your source: The CFL's twenty highest-paid offensive linemen for the 2022 season - 3DownNation

For both Beard and Kelly, EDM did us the kindness of paying a significant portion of their 2022 compensation up front, meaning the cap hit to HAM is reduced.

The former second-round draft pick collected a $50,000 roster bonus on February 1 and is signed with his hometown team through 2023.

The 32-year-old earned a $40,000 signing bonus to restructure his deal with the Elks.

Beard signed through next year is great news.

Sounds like Fontana may be out for a while and they value Woodmansey more at the guard position.

Just two more trades and our O-line can become the 2021 EDM O-line in its entirety.

A 3 year contract signed in January 2020 would expire at this seasons end.

A 3 year contract signed in January 2020 would expire at this seasons end.

Not sure but unless he signed again after the Global news article I would go with Dave Campbell. He is local and very knowledgeable on the Elks

My first reaction to the trade is this is a salary dump by the Esks . They get a cheaper back up OLineman and a # 2 draft pick in 2023 . Second thought is we got the better player in the trade . It will be a steal if Beard stays in the Hammer rather than being a rental .

I just like Gibbon He did very well at Center start of year
I just feel our O-line coach is awful ... and Bob needs fire everyone and start over .

It the coaches the O-line coach Sucks 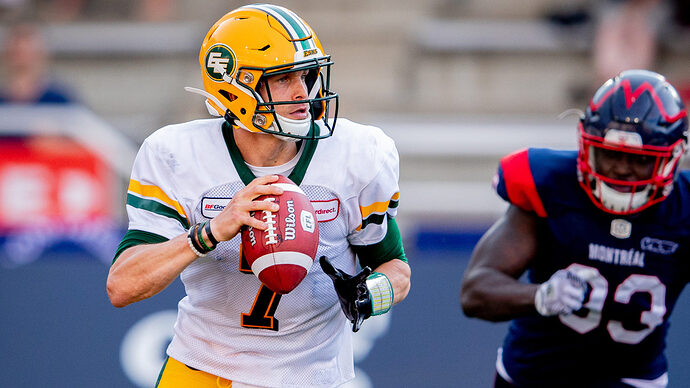 The EE Football Team announce that they have worked with quarterback Trevor Harris to restructure his contract.

The team also announced, along with the extension of Kwaku Boateng, that they have extended eight players through the 2021 season, and that a further four have been extended beyond 2021.

That's a great move! It feels like the team has it's sights on 2023 with a signing like this one. Put a solid O-Line together to finish out 2022. See how Dane performs behind the line (he should have had at the beginning of this year(!)) and then maybe look for another QB in the off-season.

This seems to have been "the plan" all along. The front office clearly wrote off this year after last years Grey Cup and apparently now realizes it has to fix the issues with the O-Line...

I wonder if this means they blow everything up after the 2023 season regardless of a Grey Cup won or loss???

By my count, David Beard has allowed 4 QB pressures this season in 10 starts. The best per-game rate among Cs.

By my count, David Beard has allowed 4 QB pressures this season in 10 starts. The best per-game rate among Cs.

This guy is the Nathan Rourke of Centers!