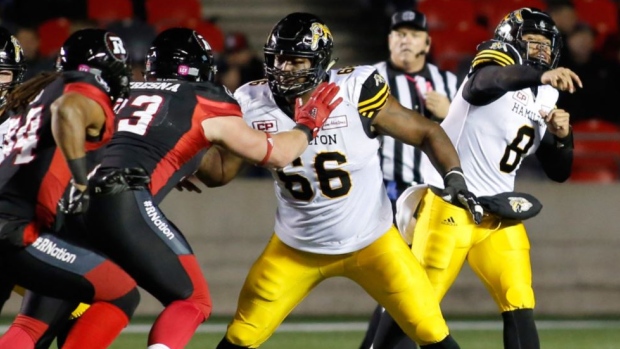 An important part of the puzzle, glad he's coming back. I thought he played pretty well.

He fit in well when he joined mid season. Pretty good waiver pickup.

An important part of the puzzle, glad he's coming back. I thought he played pretty well.

From Labour Day until the end of the season, Washington was part of an offensive line that allowed the third-least quarterback sacks (18), and produced the most rushing yards (1,149) and rushing touchdowns (13) over that span.

Our Oline is in very good shape now

"With Washington back on board, all five starters from the latter half of 2017 are slated to return. Mathews is entering the second year of the two-year entry-level deal he signed July 25, while Canadians Ryan Bomben (right guard), Brandon Revenberg (left guard) and Mike Filer (centre) are all under contract for next season. Revenberg's contract extension, signed last December, means the Ticats now have one of the game's best young linemen locked up for three years.
The team has excellent Canadian depth led by underrated veteran Landon Rice with youngsters Braden Schram, Brett Golding and Everton Williams in development. The Ticats also have three of the top 11 picks in this year's CFL draft, which has a number of highly-touted offensive line prospects." 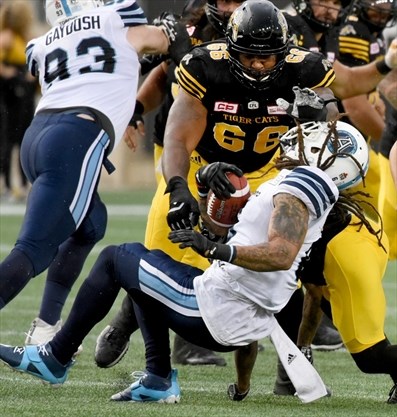 Tiger-Cats are putting a lot on the line

While the arrival of head coach June Jones and the insertion of Jeremiah Masoli as the starting quarterback are often cited as the keys to the Hamilton Tiger-Cats late-season turnaround last year,...

You got that right! An offence explosion like the Super Bowl - something like over 1100 yards of total offence, with only 1 punt and 2 sacks all game?