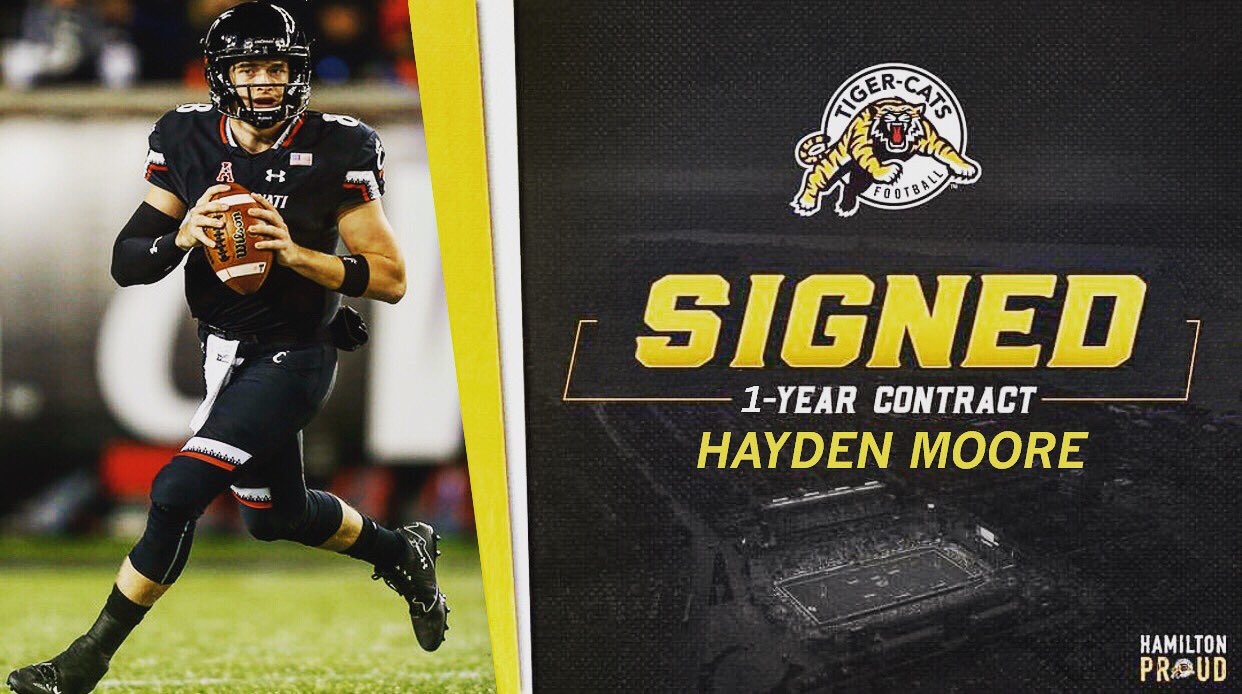 I have officially signed with the Hamilton Tiger-Cats!! I head to Canada in 2 weeks! Beyond excited!! 🙏🏼🙏🏼 thank you God!! Also @jkrenis and @jLuallen10!!

Looking up more information about him.

Found a YouTube video of him back in 2017. Wondering if he beats out Dane Evan’s for 2nd spot behind Masoli.

I saw the video of Moore’s game against Michigan . He was running for his life but hitting his targets. The Bearcats had a lot of dropped passes that weren’t the QB’s fault .

Moore has some wheels as well as a strong arm . He had about a 20 yard run against one of the best defences in the Big Ten . Devin Bush, the Steelers #1 draft pick was the Wolverine defensive leader chasing Moore all game long.

The young man stood in and took the hits as well as sprinting out of the pocket . He could be a keeper .

Pat Lynch (the ancient one)

Evans is safe as a church for 2.
From what I have read Davante Kincaide is my favourite for #3 QB ahead of Moore.

Following two dominant seasons running Grambling’s offense, Kincade was easily thought to at least be an NFL free agent signee after the draft this year, but an opportunity never matriculated. The Dallas native, who began his collegiate career in the SEC at Ole Miss, had a post-Draft workout with his hometown team the Dallas Cowboys, but again nothing panned out.

He led the Tigers to a 22-2 record, including a 16-0 mark in conference play in two years, winning two straight SWAC championships and playing for two HBCU national championships, winning it in 2016 when GSU defeated North Carolina Central, 10-9, in the Celebration Bowl. The G-Men lost to North Carolina A&T this season, 21-14, in the national title showdown.
Kincade earned back-to-back SWAC Offensive Player of the Year awards, amassing 5,927 yards through the air with 54 touchdowns to just eight interceptions.
At his Pro Day in front of 21 NFL scouts, the then-5-foot-11, 198-pound signal caller was thought to be “too small” to play quarterback in the League.
“I think it had a lot to do with my size. In their eyes, I was not a quarterback,” Kincade told The News-Star during a phone interview last week. "I can’t pinpoint exactly why I didn’t get an opportunity. Just like at Ole Miss, I didn’t question why I wasn’t starting. I was the No. 2 quarterback in the country coming out of high school in my class, I worked hard, I studied the playbook, I just worked to get better.

Sadly today, churches just aren’t as safe as they used to be.