[b]Sitting inside the visiting locker room at Toronto’s Rogers Centre, Hamilton Tiger-Cats offensive lineman Joel Figueroa was asked about the unbelievable fan support his club received in Sunday’s Eastern final against the Argonauts.

“We got some great fans here in Hamilton,? said Figueroa.

You couldn’t blame the 6-6, 320-pound lineman for thinking he was actually in Hamilton. The support the Ticats received from a good portion of the 35,418 on hand was a huge feather in Hamilton’s cap and a rather significant embarrassment for the Argos.

From the moment the Argos charged on to the field for the start of the contest - when the boos drowned out the cheers - to the end of the game - when the Rogers Centre exploded in celebration for Hamilton’s 36-24 comeback victory - Sunday’s showdown seemed like it a Ticats home game.

the support Young’s team received on Sunday was incredible. Hamilton defensive tackle Brian Bulcke — who played for Calgary last year when the Stampeders lost to the Argos at the Rogers Centre in the Grey Cup — actually started waving to the crowd to make noise in the third quarter (in a visiting stadium!) and his teammates followed his example, to the point where, when the final whistle sounded, the support for the visiting Ticats was overwhelming. Sure, the Argos received support as well, and Toronto fans may have actually out-numbered Hamilton’s (though it was close), but the black and gold supporters were definitely louder and more enthusiastic.

I felt like I was back in Calgary, but on the Saskatchewan side,? said Hamilton quarterback Henry Burris, comparing Ticats fans to legendary Roughriders supporters. “It shows that Hamiltonians are the best fans in the world. It has been since 1999 since they’ve been to a Grey Cup and to be a part of this is an honour.?[/b]

The atmosphere was unbelievable in the dome, with the decibels maybe even higher or at least equal to the GC last year. I would estimate there were about 20k Toronto fans and 15K from the Hammer.
Congrats Cats team and fans I will be cheering for you next week.

You sure did!! :rockin: Watching at home and it sounded LOUD ALL the time!! Kudos to the fans who made the trek to the Big Smoke! :thup: :thup:

Apparently according to a TSN writer..... we CLEARLY outnumbered Argo Fans

TORONTO -- Two years after being told by the Calgary Stampeders he wasn't good enough, Henry Burris is returning to the Grey Cup.

The 38-year-old quarterback rallied the Hamilton Tiger-Cats from a 14-point deficit en route to a wild 36-24 win over the Toronto Argonauts in the East Division final Sunday afternoon.

Burris cut Toronto's half-time lead to 24-17 with a late TD strike, then led Hamilton to a 27-24 advantage heading into the fourth. After watching Argos star quarterback Ricky Ray tear it up in the first half, Burris outperformed Ray in the second to lead Hamilton to its first Grey Cup berth since '99.

"Somebody pinch me, I still think I'm dreaming right now," Burris said. "For the past four years I've been through a lot, guys.

"One organization told me, basically, I wasn't good enough and traded me to Hamilton. And during the course of this year people doubted what I could do and to come out here with our team and accomplish this is huge."

Burris's 14-yard TD pass to Greg Ellingson capped a 68-yard march to open the second half and made it 24-24. Burris then drove Hamilton to set up Luca Congi's 23-yard field goal for a 27-24 lead entering the fourth.

Burris was especially cool when Hamilton took possession at its own 38 with 6:55 remaining. He marched the Ticats to the Toronto 14-yard line -- hitting Bakari Grant on a key 25-yard completion on second-and-19 -- to set up Congi's 20-yard boot to make it 30-24 with 1:14 remaining.

Ray marched Toronto from its 35 to the Hamilton 44 before turning the ball over on downs with 53 seconds remaining. Chad Owens fielded Josh Bartel's punt on the game's final play but fumbled with Ticats' special-teams star Marc Beswick recovering in the end zone.

Burris's heroics came before a raucous Rogers Centre gathering of 35,418 -- that included embattled Toronto Mayor Rob Ford -- for the first East final between the longtime rivals since '86. That's the largest CFL attendance in the facility since over 50,000 spectators witnessed Toronto's 35-22 win over Calgary in the 100th Grey Cup game last November.

"It was unbelievable our fan support," Ticats coach Kent Austin said. "I thought we were playing at home."

Burris was the CFL's outstanding player with Calgary in 2010 but was replaced by Drew Tate as the starter the following season. The Stampeders dealt Burris to Hamilton and although Burris was the league's leading passer in 2011, the Ticats struggled to a 6-12 record.

Hamilton opened 2013 with a new coach (Austin), a plethora of youngsters and having to play its home games in Guelph, Ont., while a new stadium was being built. Burris again led the CFL in passing this year and guided the Ticats (10-8) to second in the East behind front-running Toronto (11-7).

Austin said the turning points were late in the first half and early in the second when the Ticats captured momentum with their two TD drives.

"I can't state the importance of them," Austin said. "Once we evened it up it was like a 0-0 game, it was just who could outplay who the rest of the game."

"We weren't able to keep the momentum going," he said. "The turning point in the game felt like the end second quarter when we had a nice lead.

"I felt like we had the game where we wanted it. Then as good teams do, they made a run and closed the gap and then scored again to start the second half."

And it was Hamilton's offence outplaying Toronto's as Burris was 17-of-21 passing for 227 yards in the second half while Ray was just 5-of-12 for 50.

"I thought Ricky was in a great rhythm early in the game," Milanovich said. "As well as we had played offensively in the first half I thought we left points off the board.

"The second half, it's just the momentum of the football game. We have a couple of two and outs, they get moving offensively and next thing you know it's the fourth quarter and we're down."

"Nobody gave us a chance this year due to all factors we had to deal with going to Guelph, having so many things change from last year to this year and with so many young players," Burris said. "Nobody on this team is focused on winning a championship, ring, money, none of that.

"All you hear guys saying is they want to spend one more week together and when you have a group that'll do whatever it takes to make sure we can spend that time and create more memories, that's when you know you have something special."

Ray was 22-of-32 passing overall for 329 yards with two TDs as Toronto's offence had the ball for just 20 minutes nine seconds in the contest. Slotback Andre Durie had three catches for 114 yards.

"They gave me different looks in the second half and put more pressure on us," Ray said. "We had the lead and couldn't get it together.

"It's hard to get this close and not get it done . . . we'll be thinking about this all off-season."

Hamilton will face the Saskatchewan Roughriders in the Grey Cup game next Sunday in Regina as the Riders upset Calgary 35-13 in the West Division final.

It will be a homecoming for Burris and Austin. Burris is a former Riders starter while Austin led Saskatchewan to Grey Cup wins as a quarterback ('89) and head coach ('07).

Hamilton heads into the Grey Cup on a roll, having won 11 of its last 15 games. The Ticats also continued Toronto's home woes as the Argos were 4-5 at Rogers Centre during the regular season, the first time in CFL history a team had finished first in a division with a losing home record.

Spencer Watt, with two, and Zach Collaros had the Toronto touchdowns. Swayze Waters had a field goal and three converts.

NOTES -- Rookie defensive back Delvin Breaux, receiver Onrea Jones and running back Chevon Walker were among Hamilton's pre-game scratches. One of Toronto's scratches was receiver Romby Bryant . . . This marked the first time ever Burris and Ray had gone head-to-head in a division final . . . Linebacker Brandon Isaac and defensive back Evan McCollough were members of Toronto's Grey Cup-winning squad last year.

Been attending TiCat games in Toronto for over 30 years, And I've never seen such a strong and powerful presence from Ti-Cat fans.

An historic and memeorable win that will go down in the annals of Tiger-Cat history for sure.

When gametime had come and I looked about the stadium, I was absolutely astounded by our mass.

I agree, Captain. I've been to a number of Tiger cat games over the years. This day will be one I will never forget!!!!!

With apologies for the crappy focus and camera work - here is our first touchdown with Cats fans going crazy!

Again apologies for the out of focus auto focus from my phone - but there was now way Ricky Ray was going to be able to call an audible on the Argos final 3rd and 1 trailing by 6 in the last minute. Cats fans were going CRAZY making a ton of noise! Take a bow Ti-Cats fans!
(Click on the HD for slightly better - although often still out of focus - video quality).

Again apologies for the out of focus auto focus from my phone - but there was now way Ricky Ray was going to be able to call an audible on the Argos final 3rd and 1 trailing by 6 in the last minute. Cats fans were going CRAZY making a ton of noise! Take a bow Ti-Cats fans!
(Click on the HD for slightly better - although often still out of focus - video quality).

Also, thank you for anyone who made the trip from Guelph. Classy move by the organization to have the team come out with the Flags of Hamilton, the University of Guelph and the Guelph Gryphon's flag. 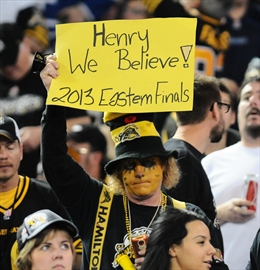 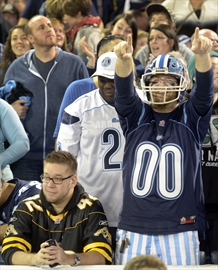 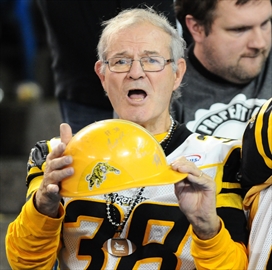 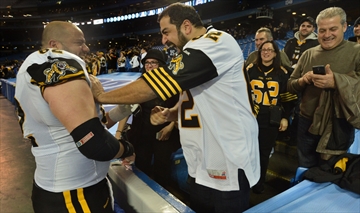 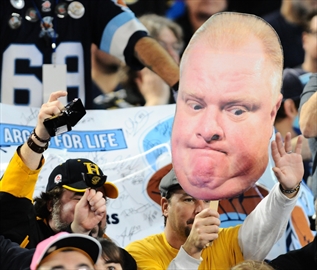 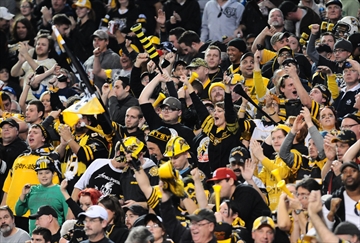 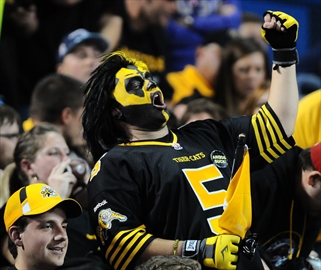 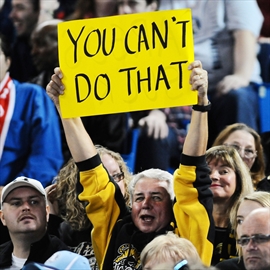 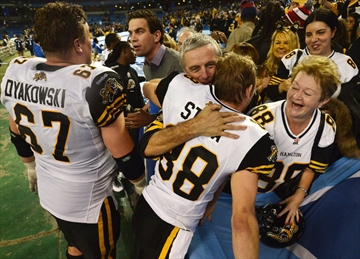 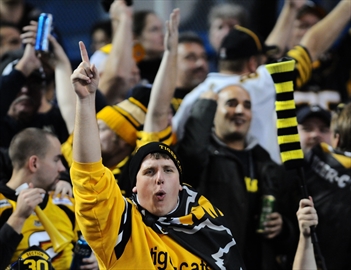 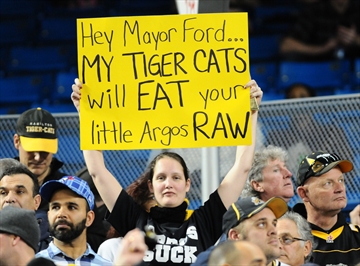 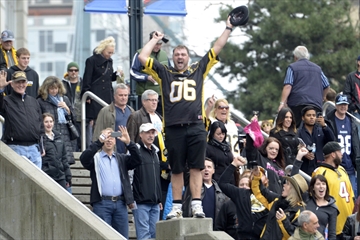 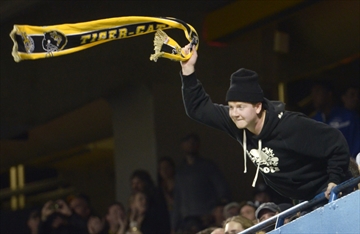 Absolutely great pics Captain. The best: #5 The 2nd best: #0. That look is priceless. Thanks

Captain, why are you wearing an Argo jersey with no. 12 on it? 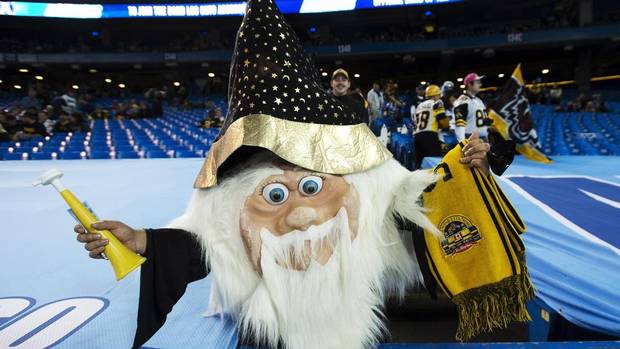 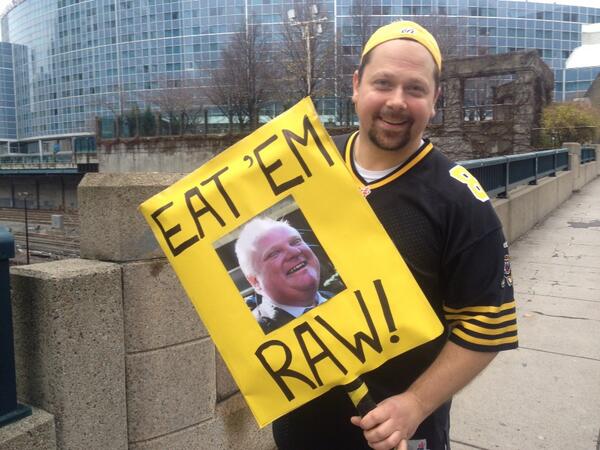 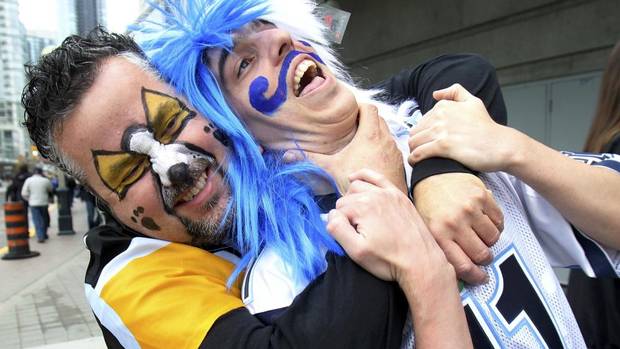 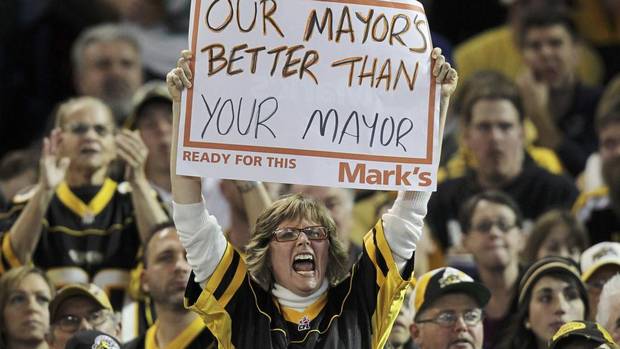 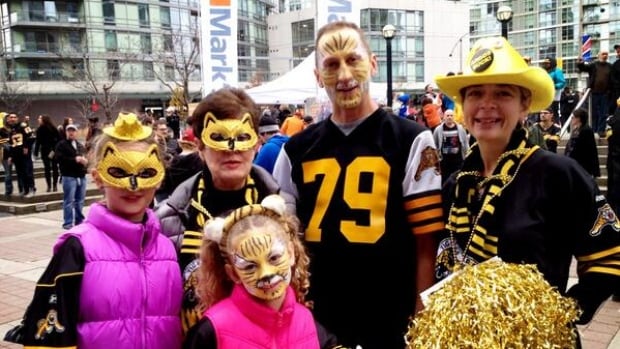 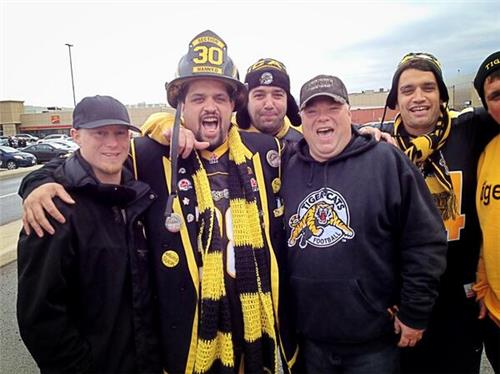 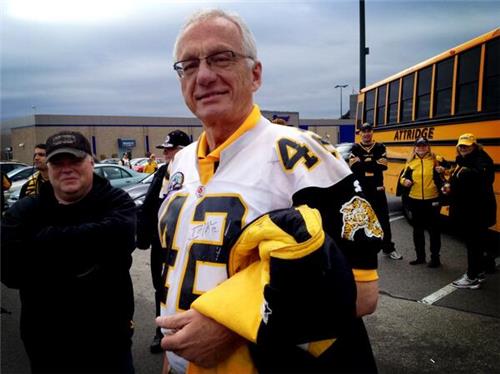 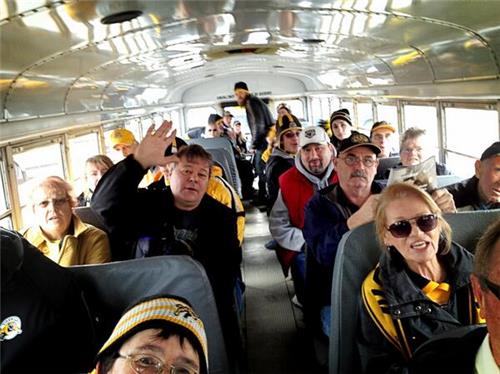 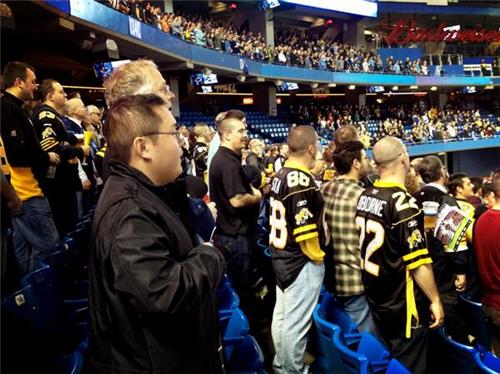 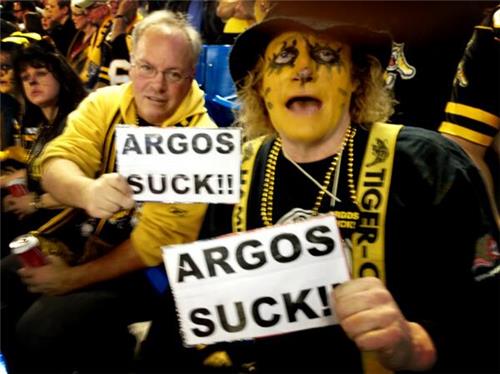 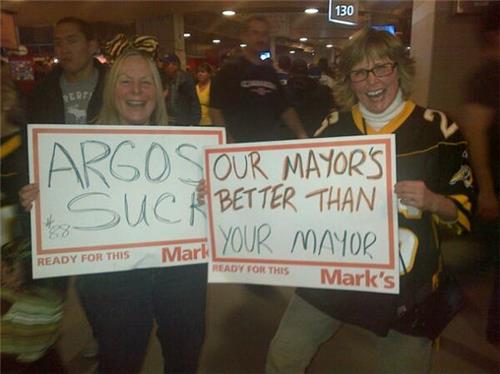 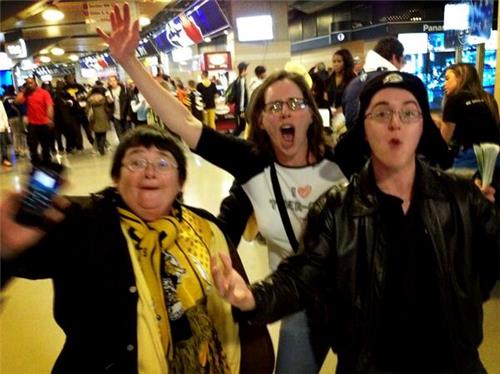