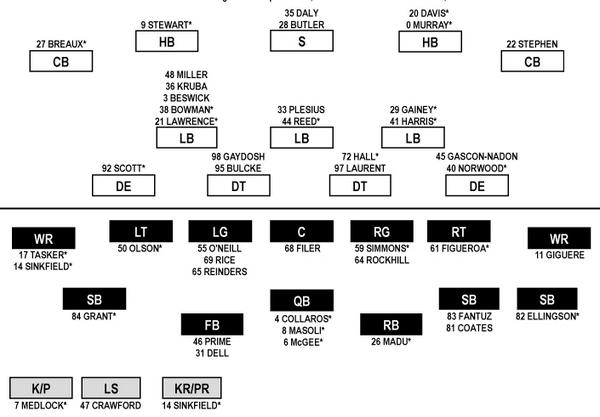 An unexpected switcharoo -- Murray starting at HB where Gainey, now shown as a back-up LB, was listed last game. I still think there will likely be more shifting in the D-backfield with Breaux sitting out as a Reserve. As expected, Norwood and Gaydosh have been added with Coleman and Landry injured. Koch's also injured making room for Sinkfield. Another move, behind the scenes, puts "Johnny" Aprile on the Practice Roster for the first time. He was a Reserve for Game 1 and has been listed as injured games since.

An unexpected switcharoo -- Murray starting at HB where Gainey, now shown as a back-up LB, was listed last game.

That might be a change from last week's published depth chart, but it's how they actually played it last week.
Murray started at HB and Harris at LB.
I like that move with how well Harris has played. You want to get both those guys on the field at the same time.

Looking at the depth chart,I can see a few different scenarios shaping up on Defense depending on if Breaux is a game time scratch or if he gets the green light to suit up.

#1....If Breaux can't go and is a game scratch,look for Murray to slide over from half to corner to replace Breaux. Murray played Boundary last season for a few games when the Cats were still shuffling the personnel around and he also replaced Breaux when he went down with injuries last season.Davis will then slide into Murray's spot and will dress for the first time in the last 4 games.Gainey will back up and rotate in at both DB and LB as well as play specials.

#2....If Breaux can go,than look for Davis to be the Import scratch again for the 4th straight game,and the depth chart to remain as status quo with Murray once again playing inside as he did last game and Harris starting at LB

#3.....Rockhill will once again be the Cdn scratch for the game,with Reinders and Rice being the backup O-Linemen

#4.....The 4 Designated Imports for the game will most likely be Sinkfield at wr on Offense and on Defense 2 will be,LB-Bowman and Gainey splitting time at both LB and DB.The other DI will be k/p-Medlock,freeing up Hall to be subbed in on rotation at dt along with Bulcke,Laurent and Gaydosh who makes his Ti-Cat debut tomorrow. L-snapper Crawford much like Fortin is a natural DE and could be used in a pinch there if we run into injuries with Scott,Norwood or Nadon in the game.

All you need to know about the Rider chart is that they will probably run the three headed monster at us all day long,so the key is to somehow slow them down and hopefully contain them......but if we can't,I feel it might be a long day for our Defense and another Rider victory against our Cats,as the Riders with Sinseri will be playing a ball control ground and pound style offense against us all day long.STOP SOMEHOW #33,#26,#30 and we can win this game. OSKI-WEE-WEE GO CATS GO !!

And post so good I had to read it twice

Koch's also on the injured list making room for Sinkfield.

Bulcke getting penetration on Labatte is key in this game, if the new kid on the block doesn't get pressure put on him, he's going to light us up. Pretty much our best DL vs their best OL in this matchup.

I sincerely hope that Austin DOES NOT go blitz crazy. Every coach seems to think it's their civic duty to send a lot of blitz on rookie QBs to introduce them to the league, and every other coach knows they tend to do this. I want to see the focus to be on picks more then sacks.

On the other side, Foley on Figueroa is a match up I have confidence with. Foley is starting to age an Figueroa matures every game. However, Olson on Chick though....yeah. There is the glaring need to have Dyakowski healthy and back in the lineup, which at this point, I'm almost concerned Dyakowski might not ever be back given how much time he's been off.

Madu had better be prepare to block left side like his life depends on it...mainly because Collaros's does. Frankly, I'd like to see more FB use for blocking this game. Yes, in tends to tip your cards that you are passing, but our receivers corps, given time should be able to leave any DBs in the league in the dust.

I'm not sure if Gaydosh has done any reps at end, but I wouldn't be shocked to see him in for Sam Scott for ratio tweeking. I'd really like to see us invest in a new Defensive End next year.

This one falls on the O.Line, and Chick, Foley, and George are all top 10 sack leaders this year, and with our pass happy offense, and not having CJ Gable to establish a run attack, if they aren't giving Collaros time, we aren't winning this game.

No wonder Sask has such a good record this season. They start 13 guys on offence.

No wonder Sask has such a good record this season. They start 13 guys on offence.

No, only on special teams. :lol:

Ours shows the same thing. It's the way teams show both a four and five receiver set.

Koch's also on the injured list making room for Sinkfield.

Thanks! I just didn't see him actually get injured or hear about him being injured.