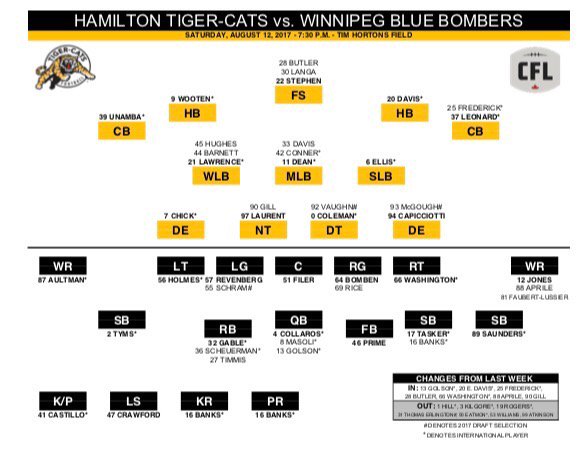 Nice to see E Davis and Butler back in the lineup.

listed on the 1 gm IL . He didn't dress last week as well against the Esks . On the other hand several of the other walking wounded are back on the active roster and listed on the depth chart .
Emmanuel Davis finally makes his long awaited debut in the secondary after missing the first 6 gms of the season . Craig Butler's name appears on a depth chart (albeit as a 3rd stringer) for the first time since the 2015 season . Everett Golson makes his season debut replacing the departed Kilgore(released) as the 3rd string QB and to a lesser extent Giovanni Aprile also makes his 2017 debut backing up Jones at WR and playing specials . Lastly the oft injured Evan Gill makes his season debut in rotation at DT .

Recently acquired Tony Washington also makes his Ti-Cat debut starting on the O-Line at RT . Terrence Frederick -DB back on the active roster as the 6th DB and 1 of the 4 D.I's on the game day .

On the minus side of things , DT- Mike Atkinson placed on the 6 gm along with DB - Justin Rogers .
Back-ups Everton Williams - OL placed on the 1 gm and Sean Thomas-Erlington-RB placed on PR . Will Hill -LB/DB and Quinterius Eatmon - OT both released since last game .

Anyone know if Rogers got hurt against EDM?
Or is he now just parked on the 6-game since Emanuel Davis is back?

I guess Schram will dress for the first time, with Williams out of the line-up, and either Aprile or Faubert-Lussier would then be the NAT Reserve.

Davis and Leonard on the same side... interesting.

Am I missing something? 2 weeks in a row they have listed 13 starters on the offence

You're accounting for the FB who would pontoon with the RB based on the package.

As long as they're not on ST to lose the Grey Cup!

Am I missing something? 2 weeks in a row they have listed 13 starters on the offence

I'm not sure of the rationale, but I can tell you it's been that way for the past 5 years.

(Note: This practice started with the Austin era in 2013. That should give certain people one more reason to complain about him.)

Here is the BB's depth chart for tonight's game : ex - Cats listed on the chart to watch for include the following:

Ok, so it's fair. They have 13 on offence too. Should make it a high scoring game

Ok, so it's fair. They have 13 on offence too. Should make it a high scoring game