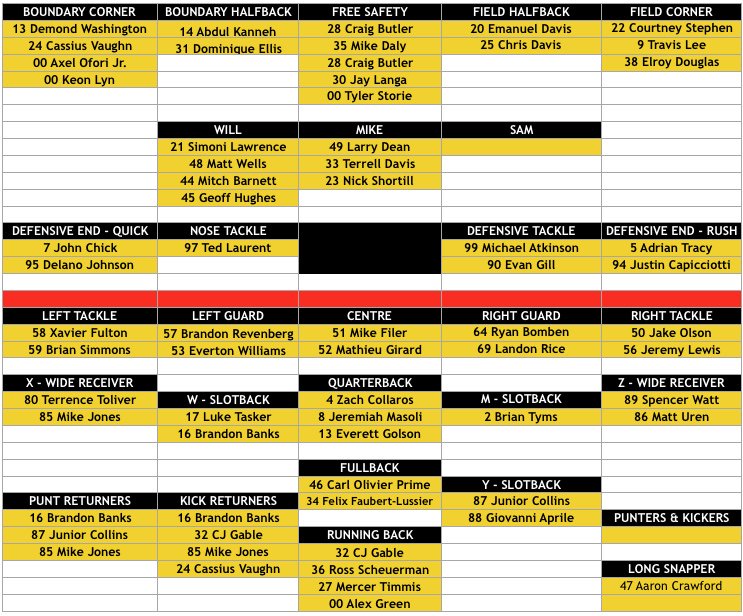 With free agency four days old I thought why not take a look at the work done by Kent Austin, Eric Tillman and the rest of the black and gold decision makers to see where the team stands and what holes are left to be filled.

The return of Craig Butler immediately makes this a completely different defence by being able to move Courtney Stephen to field corner while the recently signed halfback duo of Davis and Kanneh is arguably among the best in the CFL.

Field corner is still a bit of a question mark as all we have seen in person from Demond Washington was a couple days of training camp in 2016 before a season ending injury and SAM linebacker remains an open slot.

Linebacker Nick Shortill who was recently acquired for Fredo Plesius has the wheels to run and cover at the SAM linebacker spot but I doubt you'll see him trusted to run the all encompassing position of SAM linebacker in the Hamilton defence any time soon.

Possible internal solutions to the SAM linebacker question are Rico Murray or Keon Raymond. Both remain free agents to this point. If the Ticats go external but stay inside the CFL's free agent talent pool one option could include Argos free agent linebacker Brandon Isaac.

If the team goes external of all known CFL talent pools your guess is as good as mine.

On offence the offensive line has outstanding national depth with all six interior lineman - starters and backups - holding national status. Jake Olson should return from a knee injury which has kept him out of every game since week 13 of 2015.

Back then he was the starting left tackle but with Xavier Fulton brought in during 2016 and extended early in 2017 one would think a healthy Olson would slide to solidify the right side which struggled late in 2016.

With the loss of Chad Owens to Saskatchewan and Andy Fantuz to an ACL injury which will likely wipe his 2017 season the Ticats still have some work to do - cough Sinkfield cough - but Brian Tyms extending on Friday helps.

In the backfield quarterback in set in stone unlike the start of 2016 with Collaros still undergoing knee rehab. Felix Faubert-Lussier returns from his 5th year at Laval to push Carl Olivier Prime for the starting role at fullback and CJ Gable leads a suddenly young group of running backs following the departure of six year veteran Anthony Woodson to Calgary in free agency.

On special teams Brandon Banks is Brandon Banks and Aaron Crawford is still the steady force at long snapper but the kicking situation is completely up in the air as Brett Maher remains a free agent.

Overall I would list the teams needs as currently constituted as such,

I like the look of that secondary. Hopefully they can find a guy at one of their free agent camps to come play SLB.

Didn't Shortill play SAM at Mac ? I don't know if he's good enough to start or not but why not give him a shot at it ? Ya never know, he could be a nice ratio buster for us . It could also allow us the flexibility and luxury of perhaps starting 5 imports at the receivers position. Looking at that depth chart and the two glaring weaknesses that jump out immediately are number one....nobody listed at SAM and number two....the content , lack of experience and depth of the Cdn receivers is severely lacking without Fantuz's name on the depth chart.

Shorthill is a great prospect but I'll eat my hat if Reinebold or Austin thinks he's ready to jump from ST duty straight into SAM linebacker, one of the toughest positions to play on defense. He's also oversized for the position at the pro level. He can track and cover RBs just fine; against other teams' third or fourth receivers, it will be a mismatch and teams will exploit it. Ideally, you want a converted DB at the SAM spot, your weakest cover guy but a hard hitter with good football IQ. I would get Murray or Raymond into that position ASAP.

I'm not too sure what the plan is for the SAM position at the moment . There hasn't been a peep on if the team is trying to re-sign Murray or not and I'm almost positive that the team it seems has no plans to bring back Raymond at this time. The truth of the matter is that the SAM linebacker position has been a train wreck for the team ever since Erik Harris left before last season for the NFL and Murray getting injured mid season last year. It hasn't been adequately filled since due to an array of injuries and constant juggling of personnel because of it. I might be missing a few names here but if memory serves me correct we had last year no less than 6 different guys that started at least one game at that position in consecutive weeks for us. Murray , Sears , Ellis , Sermons , Robinson and Raymond all had a crack at it at one time or another. It was ridiculous the amount of instability there was on that side of the field all season. Personally I'm kinda surprised that the team hasn't re-signed Murray yet and or that his name hasn't even been mentioned by any other team whatsoever in free agent talks as of yet.

Ellis might be a good choice. From what I remember of him in Montreal, he played a physical, aggressive game and was a good tackler even if he wasn't the strongest cover guy. So he might function better playing at SAM, closer to the line of scrimmage.

........ Murray , Sears , Ellis , Sermons , Robinson and Raymond all had a crack at it at one time or another. .......... Personally I'm kinda surprised that the team hasn't re-signed Murray yet and or that his name hasn't even been mentioned by any other team whatsoever in free agent talks as of yet.

Your memory, of who played SAM last season, is far superior to mine, bobo.
From depth charts and notes I made, the starters were Murray (games 1 - 12), Ellis (game 13), Sermons (14), Raymond (15, 18 & the ESF)), Robinson (16 & 17). Sears only played the first 5 games and was listed as a starting DB for each. I agree with your comments on Rico. With nobody, that we're aware of, obvious to fill that spot, the powers must have somebody, as yet unannounced or, at least, in mind.

Well anyway you look at it the cupboard right now is bare when it comes to the SAM department. We need to find some bodies from somewhere to fill it before the season starts.Where that somewhere is exactly at the moment is the question that needs to be answered.

Ellis might be a good choice. From what I remember of him in Montreal, he played a physical, aggressive game and was a good tackler even if he wasn't the strongest cover guy. So he might function better playing at SAM, closer to the line of scrimmage.

You might be right on Ellis and with the signing of Kanneh there's absolutely no way barring injury that he starts in the backfield this season . The only other way Ellis makes this team this year otherwise is as one of the four D.I's on the game day roster. The only reason he got a starters spot last year in the first place was because of all the injuries that decimated our D-Backfield. The only reason that he started the one game at SAM (which ironically was against Mtl) was because of a late pregame scratch to Rico Murray who pulled up lame with an injury during warm ups and couldn't go for the game. Ellis basically got thrown in there as an emergency replacement last minute basically because the team didn't have any other back ups dressed and healthy to play at the time. I honestly can't remember how he did in that game playing SAM without virtually any practice time to speak of BUT that's what the season was like last year at that position. It was , it seems a virtual Fluster Cluck from one game to the next with absolutely no stability whatsoever after Murray's injury.

Works for me. Butler played SAM for the 2013 Grey Cup champ Riders, and we all know that Daly is more than capable of starting at Safety.

In the future, it would be nice to at least give a link to Marshall's site so that he gets some traffic for the work he has put into this.

In the future, it would be nice to at least give a link to Marshall's site so that he gets some traffic for the work he has put into this.

Thankyou for correcting,
I always want to credit sites for their use for the reasons that you have brought up.
In this instance I forgot or missed posting to his site. :oops:
It is a very useful, thorough, accurate piece that Marsh put up, as is his usual. He has tremendous insight, we are fortunate to have his expertise.

All this being said, I would like Rico re-signed as SAM

Wasn't he on the weak side of the boat, last year, with Brandan Issac at SAM?
Either way, both are still free agents.

Wasn’t he on the weak side of the boat, last year, with Brandan Issac at SAM?
Either way, both are still free agents.

I say No and No to Greenwood or Isaac as possible solutions. Here are my 5 reasons why. #1… Both are on the wrong side of 30 (Isaac 32 yrs old)(Greenwood 32 yrs old) #2…Greenwood is too big at 6’ 2" 237 lbs to effectively play at SAM and is more suited at WILL or MIKE. #3…Greenwood has had a history of injuries and could be one more hit to the noggin from calling it a day. #4…Isaac would be a strictly stop gap signing (much like Raymond was last year) and not really much of an upgrade on Murray who is 3 yrs younger , more versatile , and has more upside at this juncture of his career. #5…Last but not least , simply put , if these two aren’t even good enough for the Boat Anchors to re-sign then they certainly wouldn’t be good enough for us .