I take it there will be no rookie camp
I suppose that since none of our 2018 draft picks have been reported as signed yet,
maybe there is no reason for a rookie camp to be held. ???

There are a few errors, in it, to correct:

Among the DTs, "91 Robinson" should be 91 Richardson

Among this year's draftees, shown in red, Buren (Justin) should be added to the WRs

(Another draftee, Marcus Davis, is unlisted, and should not be. He will attend meetings but will not participate, on field, due to injury.)

Thanks for the info ottawacat 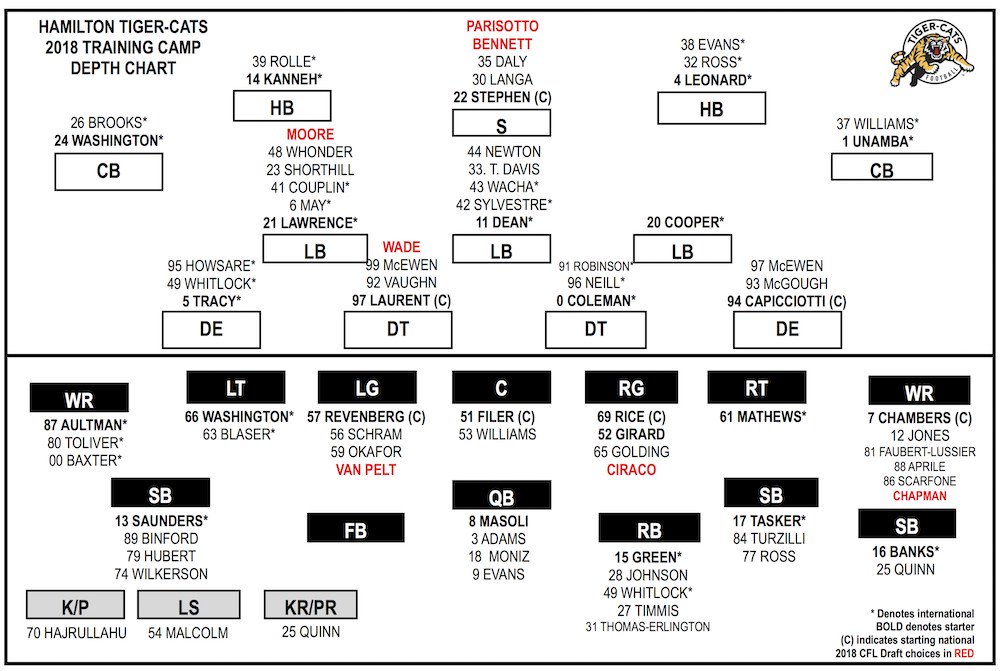 The team usually hands out a complete player listing @ the camp. It's usually one of the media/PR interns. They generally walk amongst the people there handing it out.

They haven't had a depth chart but a complete listing both alphabetically & numerically.

I'll say I always enjoy checking out training camp. It's interesting to see how they manage so many players doing so many things and getting so much done in a relatively short time. It's a real study in logistics and efficiency and management etc. It really underscores how professional these organizations and people truly are.

At times it's like a wild multi ring circus of chaos! Position groups working on techniques. Then break out to 7 on 7 passing at one end while linemen/linebackers work inside run game stuff. Then they quickly break into special teams drills. So much is happening all over the place with nary a minute wasted.

It's also interesting to see how things change from one regime to another. For instance I thought Bellefuille ran a really good camp. Cortez much different. Then Austin's approach. It's fun to watch.

I encourage everyone to try and make it down if you can. I enjoy it even more than much of the regular season to be honest.

Based on that chart... it looks like they aren't doing the 2 National receiver thing. So we will have 6-7 guys compete for 1 spot.

Only really the first 4 and Chapman will make the final cut IMO. Aprile and Faub-Luss are valuable on ST, so they will make it.

Many unanswered questions on this side of the ball!
Defence will need to be much improved over last season.

8 ) Although the chart has imports or Internationals if you like listed with asterisks there are mistakes or omissions here as certain players including Quinn , Turzilli , Ross , Johnson , Binford , Hubert and Wilkerson are listed as being Canadian players .

June Jones is more into TE use than FB it would seem from late last season. Meaning the RB is the only true dedicated ball carrier, and the TE is only a blocker.

Well with Austin out then it just might happen.

Heading down to Mac with my Camara and Zoom lens , going to hide in the bushes or climb a tree and sell the pics of Johnny Canada to TMZ $!!!!