ANYONE WATCH THE NEW AAF GAMES ON THE WEEKEND

I watched a bit of the game yesterday. Arizona Hotshots game. Empty stands. The broadcast was horrible. And I am not a fan of no kick off.

Also, each player makes only 75 k a season right from the QB down

ANYONE WATCH THE NEW AAF GAMES ON THE WEEKEND

I won’t judge it too much for week one.
The broadcast was lackluster…but I think that was to be expected. They seemed to improve video as games progressed.
The lowest ranked QB looked the best. That was interesting.
The play overall was so-so, but there were some nice plays
Some of the stance and blitzing rules will take some getting used to.

The attendance for the AAF was pretty impressive on Saturday’s games both surpassing 20,000 visitors, but Sunday was a little different. The Birmingham game went over 17,000 people in attendance and many believe the Arizona game was less than that.There was not an announcement for the Arizona game, but it did not look like many, hopefully it surpassed 10,000.It is interesting because the Arizona Hotshots play in Tempe, Arizona which is ten miles from Phoenix where the Cardinals play. The other three games were played in cities without and[url=https://www.nfldraftdiamonds.com] NFL[/url] team. Hotshots coach Rick Neuheisel said after the game he was happy for the fans in attendance and hoped more would tell a friend.

FYI, the first CFL game in Birmingham had an attendance of just under 32,000.

I did not watch, but I saw highlights. It’s hard to gauge from the first games, but overall I thought it was a decent product. Note that I saw highlights and not full games which shows I wasn’t willing to put too much time in to it. There were some good plays, and some sloppy plays.

I will gladly watch full games of NFL or CFL, with teams I am not personally invested in.
I try to watch a lot of Rugby 7s matches, and especially tourny finals and semis.
I will occasionally watch a full AFL game of footy.

I watched the AAF highlights…

That gives you an idea of my personal pecking order. However, if the AAF grows that could change, and fill a void this time of year that is normally a little lacking of sports other than 7s and footy.

The biggest hit from the highlights that I saw:

I will be surprised if it lasts the year.
Poor quality of football with good production value still equals unentertaining.

saturdays broadcast was better i thought

The biggest hit from the highlights that I saw:

And people thought that was legal.

Perfect example of how head posture will be pivotal when it comes to tackling and dealing with concussions.

(Player hits the quarterback in the chin with his helmet).

The CFL needs to go to soft gel helmets so when players have poor technique it’ll hurt the attacking player when he uses his head like that.

I will be surprised if it lasts the year.
Poor quality of football with good production value still equals unentertaining.

You may be right in that it doesn’t last the year. A counterpoint, a lot of viewers expressed that they thought the quality of football was good.

I can’t say because I didn’t watch a full game, but I saw good play and sloppy play. We will see as it goes.

History is not on their side. Non NFL/CFL leagues have not had a great history,and there is no shortage of people trying. No one is going to duplicate the AFL’s wild success. (For those who do not know, the AFL lured many players away from the NFL with money, survived, and eventually got with the NFL and decided to play a championship game, the AFL’s champion vs the NFL’s champion in one massive championship - a super bowl. The leagues merged a couple years later)

I watched a bit of two games once I discovered they were on TV. I was mainly looking for exCFLers. Didn’t notice any of note. Does anyone know of any exCFLers playing in the AAF and for what teams?

Gotta find myself a team to cheer for. None of the team names or uniforms/branding really impressed me.

I wondered if that was the same Mike Riley. He is starting to look pretty old.

Was nice to see former Rider Trent Richardson score a couple TD’s. Still wished he had stayed in the CFL, but the Riders went out and found someone even better suited to the Canadian game

I watched a bit of two games once I discovered they were on TV. I was mainly looking for exCFLers. Didn’t notice any of note. Does anyone know of any exCFLers playing in the AAF and for what teams?

Gotta find myself a team to cheer for. None of the team names or uniforms/branding really impressed me.

Supposed to be 1 player allocated from each CFL team.

I don’t see the overall woeful offences fixing themselves this month. Let’s note that each offence also has the advantage of fewer players on defence allowed to blitz.

Now perhaps there are many to watch more closely on defence?

There are no such limitations on players who can blitz in the NFL or CFL, so in that regard at the very least the AAF is bush league already but we shall see if any players can shine.

Allowing the sort of big hits the NFL has eliminated is a quick path to revenue but would be disastrous for the game of football.

The Alliance of American Football debuted Saturday to a round of polite applause. The XFL is scheduled for [url=https://ftw.usatoday.com/2018/12/what-is-aaf-affl-ffl-xfl-nfl-competitors-rule-changes-starting-dates]a 2020 return, and other alternative leagues are in the works[/url].

It feels like we go through this exercise once or twice a decade, when some entrepreneur gets the bright idea (for a second time, in some cases) to try and provide football filler for the rest of the year. The NFL is surging towards being a $20 billion a year business; surely there’s room for alternate leagues looking just to generate a mere several hundred million.

In most sports, more opportunity for athletes to play and get paid is a good thing. One of the great under-covered stories in basketball is how many U.S. college players go on to wildly interesting and well-compensated careers in every corner of the world. But football is different. The barebones violence of the sport is enough to leave players damaged forever. Any attempts at expanding the sport should be undertaken with careful consideration of how the game has changed and needs to continue to change.

I have never heard of this site, but Footballscoop claims these are the salaries for AAF coaches:

A review of publicly-available AAF rosters found each staff employs between 11 and 13 total coaches, putting a ballpark figure for coaching staff expenditures at $2 million per staff and $16 million for the entire league.

Sources: AAF coaching salaries are better than you might think - FootballScoop

The Alliance of American Football launched last weekend, and a successful launch it was. The league drew more viewers to CBS on Saturday night than the NBA had on ABC, and moving forward the league will have each game broadcast nationally between CBS...

Yet, the AAF is “not receiving rights fees from networks”

The league is not receiving rights fees from networks. Ebersol described the league’s relationships not as time-buys but as “partnerships that extend beyond just broadcasts.?

At its core, the league is equal parts sports and technology startup. Its app, which is the second-most downloaded sports app on Apple’s App Store, features real-time visualization of plays along with users trying to predict plays. As more states begin to legalize sports gambling, that technology could be marketed to other platforms.

“What we are looking to do is create a structure that is equitable for the network,? Ebersol said. “People paying for media rights are losing money. In the modern tech world, you want to get people engaged in the product, and there is an enterprise value. CBS has been buying into technology companies, and Turner bought Bleacher Report a couple years ago.?

The Alliance of American Football was a ratings winner in its inaugural weekend, but founder Charlie Ebersol realizes it is a small sample size. “We feel really good about them and that our theory that Americans want more football tends to be true,”... 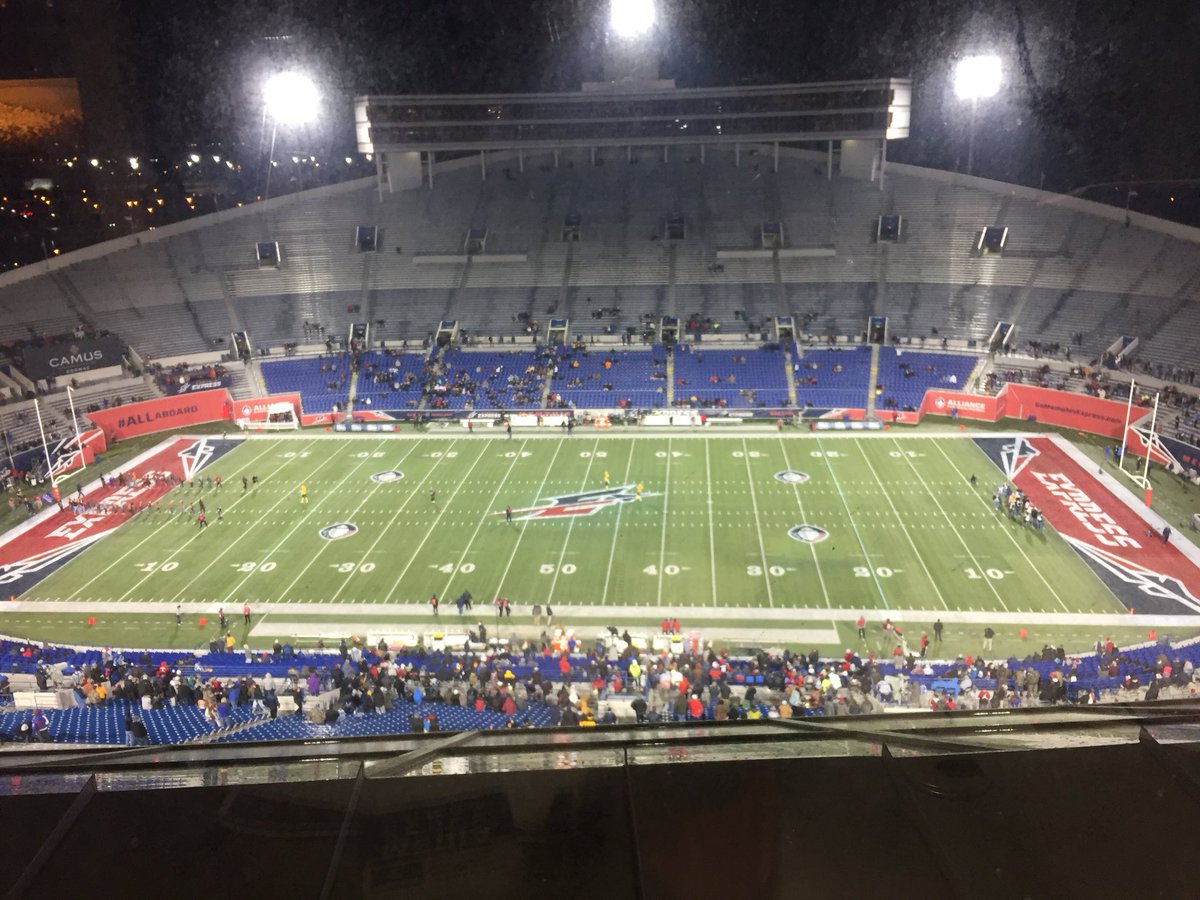