The Johnny Manziel thread (that refuses to die) 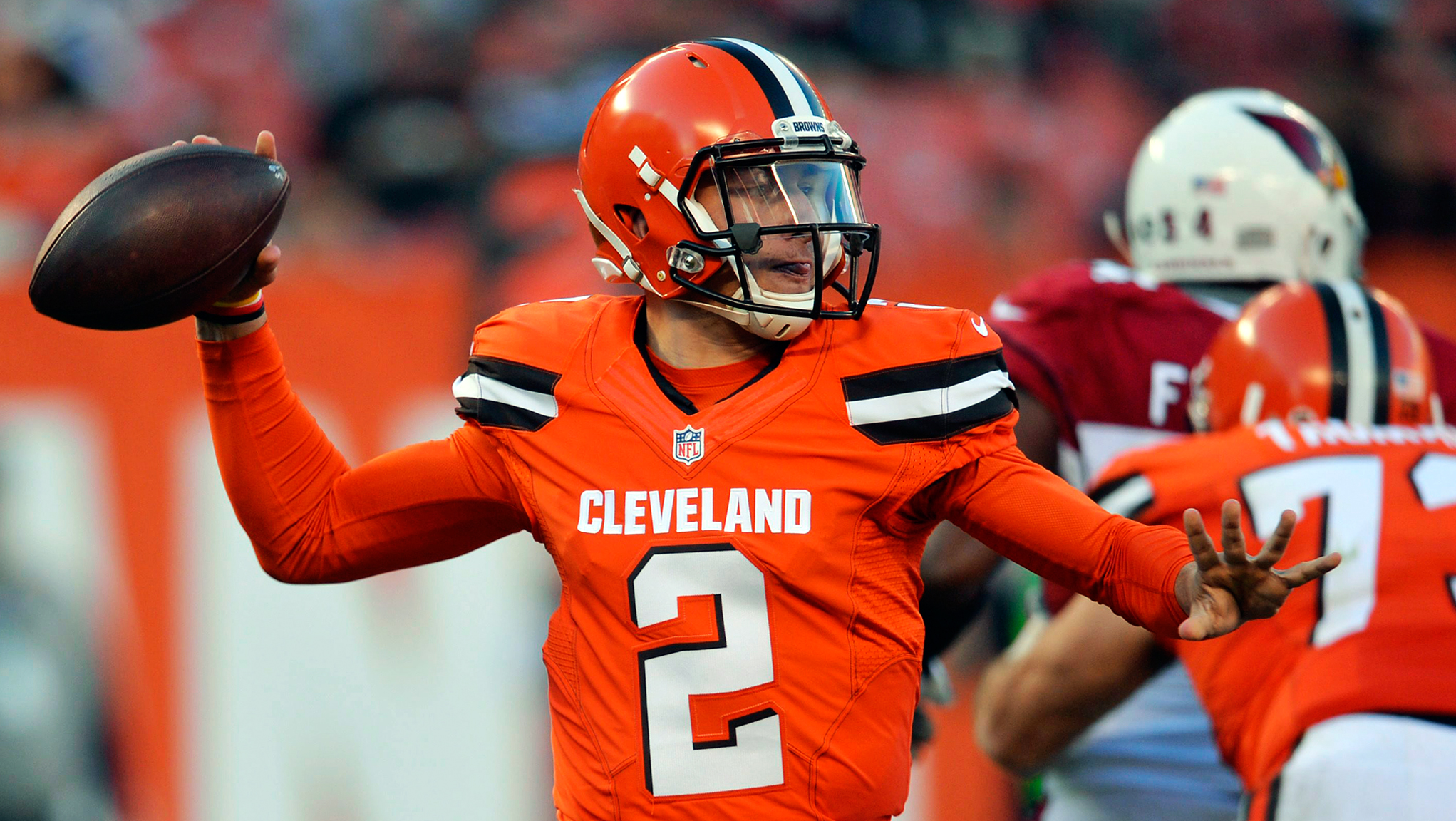 Ambrosie prepared to approve a contract for Manziel - CFL.ca

The Canadian Football League issued a statement Thursday that said Commissioner Randy Ambrosie is prepared to approve a contract for free agent quarterback Johnny Manziel should one be negotiated.

“Since last summer, the Canadian Football League has been engaged in a thorough process to determine the eligibility of Johnny Manziel. This process has been conducted with the cooperation of Mr. Manziel and independent of the team which currently holds his CFL rights, the Hamilton Tiger-Cats.
It has included an ongoing assessment by an independent expert on the issue of violence against women, a review by legal counsel, and an in-person interview of Mr. Manziel conducted by the Commissioner. As well, Mr. Manziel has been required to meet a number of conditions set by the league.
As a result of this process, the Commissioner has now informed Mr. Manziel and the Tiger-Cats he is prepared to approve a contract for Mr. Manziel should one be negotiated.
The process that led to this decision does, however, will continue. Mr. Manziel has been informed he must continue to meet a number of conditions in order to remain eligible. These conditions, while extensive and exacting, remain confidential.? 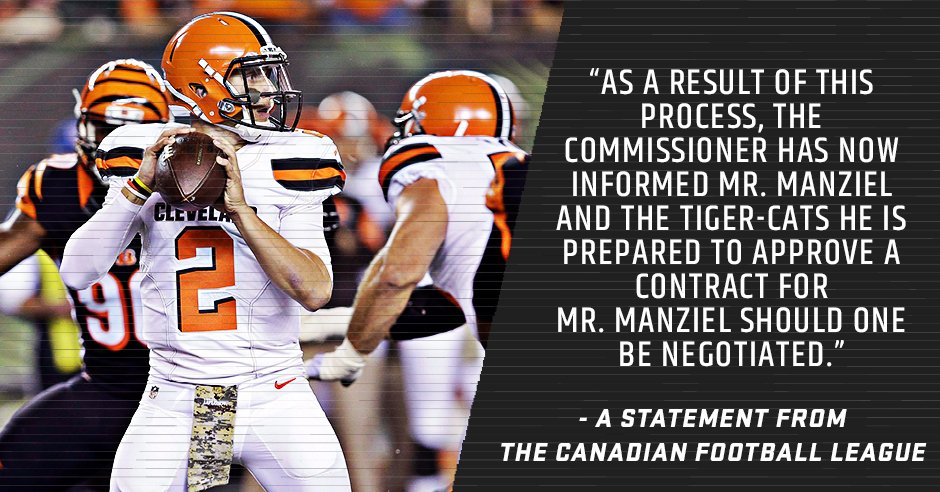 the response from the TiCats 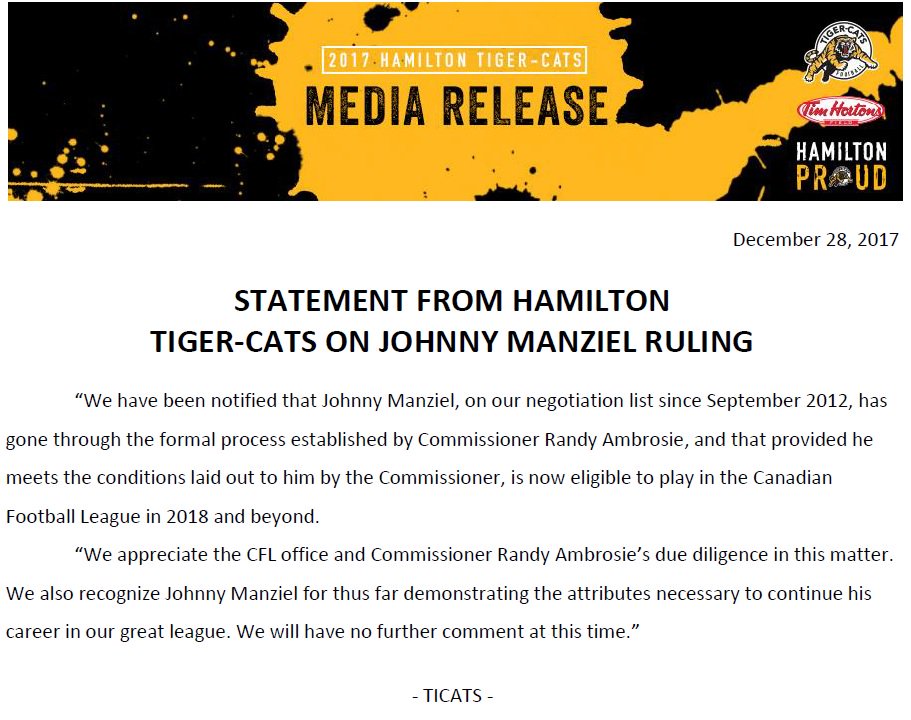 This is the green light that will ignite the phone lines.

I can now see many teams calling the Ticats to discuss trade deals for Manziel's rights.

The league will look stupid if Johnny comes to a CFL camp and gets "hurt" like Vince Young did. All this work for a guy that may not want to be here.

Vince only "injured" his hamstring when he was informedhe wasn't going to be named starter. Out 4-6 weeks in camp and never to be heard from again.

Grover: Do you still maintain your view that Manziel will sign for league minimum salary, so no negotiations are necessary?

Got my popcorn ready! I can't wait to see how this $!*% show turns out.

Vince only "injured" his hamstring when he was informed he wasn't going to be named starter. Out 4-6 weeks in camp and never to be heard from again.

Nailed it crash, it was saving face move.

Grover: Do you still maintain your view that Manziel will sign for league minimum salary, so no negotiations are necessary?

The League had stated that all that is required is to offer a minimum CFL contract, He could be offered more. (and I suspect he would)
The TiCats now have 10 days to make an offer or trade his rights, If the TiCats trade his rights then the team acquiring him would have another 10 days to offer a contract.
If the TiCats do not make an offer within 10 days Manziel would become a Free Agent

If he rejects the offer, he would not be allowed to go onto another teams neg list for 1 full year from the date of the offer.

"It’s unclear which teams are interested in Manziel but any club acquiring him would have an additional 10 days after the consummation of the deal to make him a contract offer. If an offer was made and Manziel turned it down, he’d remain on the franchise’s negotiation list for up to a year from the date of rejection.
A team could initially present Manziel a two-year deal — one year plus an option — for the league minimum of $53,000 annually knowing it’d be turned down. But it would be with the understanding two sides would have up to a year to work out a more suitable agreement while ensuring Manziel doesn’t step on to a CFL field with another franchise."

Thatz probably in the works and will get announced soon. Going to be a ride!

It's not often we are the talk of the league so early in the off season. Someone was smart enough in ticat land to draft him. Probably KA.
How will the dominos fall? How many season ticket holders will non renew? How many new ones can we get.
I hope we sign who ever will put more bums in the seats!

I would hope as part of his contract, if he is signed, that there is an incentive bonus to pass the physical at training camp because the pics posted earlier from 7 weeks ago showed he was not in any shape to play pro ball.

I haven't said anything on this topic, and that's mostly cus it's felt inevitable after going through all the hoops to get him eligible, after working him out last year, and June Jones clearly loves the guy and thinks VERY highly of him lol his comment was downright ignorant, but I can't lie I get where he was coming from.

Watch these highlights and tell me he's not one of the most dynamic quarterbacks you've ever seen at any level?

Whether you like him or not is a totally different story, but you're lying to yourself if you don't think he is one of the greatest college players to ever live.

The issue I have is first and foremost, I like Masoli, I like that he's dedicated himself to the city, and I like that he's shown consistent improvement every single time he had to take over for Zach. I also love Zach, but unfortunately his time has come to an end I think. I believe he will be a valuable piece for a winning team going forward, but he won't be wearing black and gold, which is something all of us will have to come to terms with and it's not easy because Zach was our beacon of hope just two years ago. I wish the story had a happy ending, but this is sports and I think both Zach and the Cats are in a good position to have a clean breakup and both find immediate success.

I'm a long term guy and that's how anybody running a franchise should be, so from the get go I thought this Manziel stuff was a headache that's going to get in the way of Masoli taking over as the main man in town. Masoli has more than proven to me that he can lead this team to a Grey Cup if given the reins under Jones, and realistically he could end up being the starter here for the next 5-7 years with any stroke of luck.

BUT, I don't think that's the route they're going. They could be trying to boost Manziel to bait another team into trading for his rights, which would be great if they did, but I just don't think that's likely at this point after all the paper work they've gone through to get Manziel eligible. I believe they wanted to sign him last year but the league blocked it, some say we chose not to sign him but that's not how I read into the situation. I think Ambrosie was worried about 1) public image especially after the Art Briles incident and 2) I think they wanted to make sure Manziel was clear of any charges so he could get over the border, which he was like a month ago ... 3) I'm sure they also wanted to make sure Johnny was serious but that was far behind the other two reasons for their delay

So now is where I gotta deal with the reality of Johnny Football in Hamilton. There's positives, and there's some huge negatives. Obviously first off you wanna just make sure he has his head on straight, isn't obsessing about the limelight and partying, which by all accounts he has been. Only time I see Johnny is during press releases like this one and that one TMZ creepshot on the beach which, well it's TMZ they're a horrible company I could care less what they do. If you read about his time at A&M and Cleveland, it was his dedication to the game that held him back, plain and simple everybody wanted Johnny to grow up but Johnny, and as a 23 year old kid myself, I completely understand how somebody could crack under the enormous pressure and want to slack off. Would I have done the same? All of us would like to think not but reality is majority of us wouldn't be able to handle all the fame either when you're so young and everybody hails you as king.

If he reverts back to that form in Canada, he's a goner by Labour Day. He needs to take this chance seriously or he will forever be known as a "what if" in pro football circles.

Now if he comes out and plays with that competitive edge that made him so great in college and truly dedicates himself to the team, I see no reason why Johnny can't tear it up under June Jones. Masoli is great and I love his skill set, but Manziel is simply a better version when he's on his game, and the wide open field up here would provide a pretty canvas for him to work his magic.

Which brings us to the final issue, because let's say Johnny Football does land in Hamilton, and let's say he is successful, maybe a home playoff date and a nice stay line...Well then it's bye bye Johnny Football because he'll be flying south to play in the NFL if he can prove he's prepared to be a mature professional athlete that a franchise can depend on.

Which is why I say just stick with Masoli and let's see where he can lead this franchise in the long term. Maybe...just maybe we sign Manziel and win a Grey Cup, but those odds are astronomically low when you assess the history of situations similar to this one, and also factor in all of Manziels baggage that could come to fruition once again in Canada.

Doesn't seem like the risk is worth the reward of sending Johnny back to the NFL and leaving us in search of another quarterback in a couple seasons, but we'll just have to wait and see how this all plays out.

If you made it this far I commend you, I feel better now that I've got this off my chest lol

The problem I have signing Johnny Football is that chances are they will be dumping 2 qb’s that have proven at some point they can play at a high level in the CFL. So far Johnny has proven he can’t play at the pro level. His body of work has been awful in the NFL up to this point.