Harvard-Yale is about a different kind of football game that showcases elite...

The Harvard-Yale football game is likely the largest gathering of the world's richest and most powerful people, says Jake Novak.

Interesting. Reminds me of the origins of American football coming from the Ivy League, soccer and rugby-like and the Canadian influence from McGill which was rugby:

Rule making and association forming also continued. Princeton had organized the first football committee in 1871 to set rules and support the team, and both Harvard and Yale soon followed. Because the codes they devised were unique to each school, several sets of rules existed. Harvard followed a variation of rugby popular in Boston that reduced the size of a team to between ten and fifteen men and permitted running with the ball under certain circumstances. Yale and Princeton stuck more strictly to soccer and did not permit running with the ball. Such divergences were fine if the games were going to be intramural, but unacceptable if the schools were going to play each other. Princeton took the lead in promoting coordination, calling a conference at the Fifth Avenue Hotel in New York for October 19, 1873, to hammer out a common set of rules. Princeton, Rutgers, and Yale sent representatives. Columbia chose delegates but did not send them.

Standoffish from the start, Harvard declined to participate on the grounds that its Boston rules were so different from those of the other colleges that they could not be reconciled. Its letter explaining this to the captain of the Yale team is an unintended masterpiece of patronization. "You perhaps wonder on your side at our rules; but I assure you that we consider the game here to admit of much more science, according to our rules. We cannot but recognize in your game much brute force, weight and especially 'shin' element. Our game depends upon running, dodging and position playing.... We even went so far as to practice and try the Yale game. We gave it up at once as hopeless. . . . I would send you a copy of our rules but we do not have a spare copy."

Those students who did attend the conference formed the Intercollegiate Football Association, the sport's first governing body. The game they agreed upon still very much resembled soccer; no throwing or carrying the ball was permitted. Teams were to have twenty men to a side, although Yale argued for eleven on the theory that it might be easier to gain faculty approval for fewer men to travel to away games. These 1873 rules, which lasted only one season, were ultimately of little significance. Harvard eventually prevailed, but first Harvard's own game had to change.

The occasion was a pair of matches in May 1874 against a visiting team from McGill University of Montreal. The first of the two contests was played under Harvard rules, the second under the All-Canada Rugby Rule Code. Harvard won the opener, 3-0, in just twenty-two minutes, while wearing for the first time "magenta handkerchiefs bound round their heads." Although the second game ended in a scoreless tie (in part because McGill had neglected to bring a Canadian rugby ball, assuming erroneously that they could buy one in Boston), Harvard students who had recently derided the Canadian rule as "wholly unscientific and unsuitable to colleges," so preferred the new game that they decided to adopt it.

Of equal importance, Harvard vs Yale where Malia Obama and her boyfriend became known. 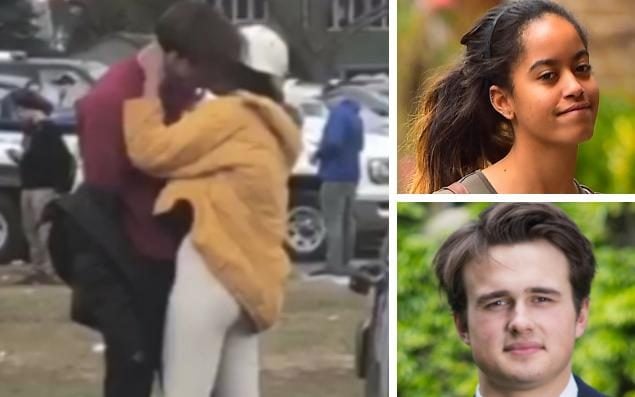 Malia Obama's British boyfriend feared girls did not like him as he tried to...

In a self-deprecating letter to his younger self, Rory Farquharson once bemoaned how he was a “lanky over-confident public school boy” whose “floppy mop” was embarrassingly unattractive to girls.

Ok, now that IS important.