The CFLPA Pro Players will be hosting an Award Show After Party sponsored by Molson’s, Red Bull, Kipling Wine and Diageo beginning at 9pm on Thursday November 22nd, 2007 at Philthy McNasty’s located at 276 King Street West.

The Grey Cup is heading to Toronto and everyone is going over the top to ensure this will be the greatest Grey Cup celebration of all time. Come join us and fans from across the nation at Philthy McNasty’s to celebrate the biggest party in Canada. .

The CFLPA Pro Players Award Show After Party will feature live music and players will be in attendance giving fans a chance to interact and party with some of their favourite CFL Players. There will be free giveaways and prizes that fans will not want to miss. 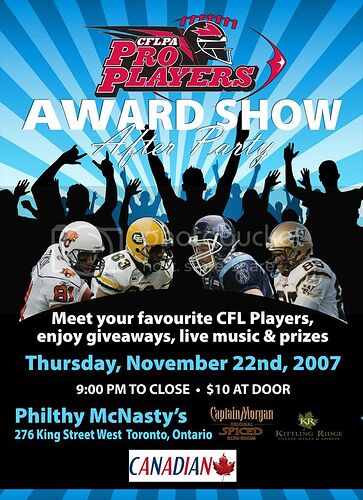