?? He was at Training camp, bailed on the Als and was then suspended.

Right, my mistake. I remember that now.

Right, my mistake. I remember that now.

He bailed in TC. He then came back and played in one game.

I think the Eskimos should pass on making an offer to Terrell Owens and allow some team that needs the publicity to sell tickets, e.g. Montreal Alouettes, Toronto Argonauts or British Columbia Lions, sign Owens.

How do you no they won't pass. You can put basically anyone on your future list.
None issue so far.

I think the Eskimos should pass on making an offer to Terrell Owens and allow some team that needs the publicity to sell tickets, e.g. Montreal Alouettes, Toronto Argonauts or British Columbia Lions, sign Owens.

The Esks don’t need him, though I think with Reilly it’s probably one of the better spots he could play and have success. His best value, if any, would be as a potential trade asset. As for trade partners, I don’t see Toronto being interested in Owens as I don’t think he fits with the mould of a person Trestman would want in the locker room given how he talks about players. Trestman preaches committing to the team, and Owens’ “that’s my quarterback” moment aside, he’s very much about himself on the field. I could see him wanting to go to Montreal because he would be familiar with Mike Sherman. That would be a disaster though. The offense is in shambles and the QB play is not very good to this point.

Personally, I don’t care about Owens and whether he plays. The thing about his age doesn’t bother me. We accept Gordie Howe as an icon and he played in 3 or 4 different leagues over his career and played regularly into his 50’s. So Owens being 44, if he’s in shape and it appears like he is, may not be as big a deal. I don’t think it embarrasses the league either if he plays here in any way. IF he plays, and if he has success, it would be because of his ability and his commitment to staying in shape and work ethic. But this is a good football league and there are a lot of good players here, so if he doesn’t take an opportunity seriously, he’ll go the way of many other ex NFLers and get chewed up and spit out. Barring a trade, I think the Esks offer him league minimum, he says no, and the story dies off.

Personally, I would love to see TO join the league because I've been wondering for years if he could actually go out and still ball.

That said, I just don't see how it can work.

He is six years removed from contact football, needs time to adjust to the game and his skill set was never really a CFL skill set.

Only way I see it working out is Mike Sherman and Montreal making the move because...........well, they're the only ones desperate and niave enough to do it. 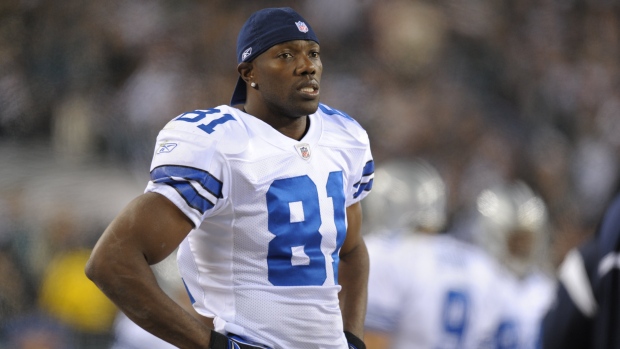 The Edmonton Eskimos have dropped NFL great Terrell Owens from their negotiation list. Owens activated the 10-day window for the Eskimos to offer him a contract or drop him from their list three days ago.

Thankfully TO will look for a team where he can showcase his talents ... Drew Willy and the popgun offence won't interest him.

Props to Sunderland on a couple levels. Would seem he likely did this in attempts for a trade of really anything. Then...He could have offered base and if rejected sat on his rights for a year. Cutting bait was the right move when it didn't work out

TO has ties to the Als and has said he ptefeted East so...