[b]HAMILTON — It's a thankless job, but one Ted Laurent does so very well.

The spotlight rarely shines on the burly defensive tackle as he patrols the middle of the Hamilton Tiger-Cats' rugged defence. That's not surprising given the 6-foot-1, 305-pound fire hydrant's assignment is hardly a sexy one — hold his ground against two hulking offensive lineman to free up others to make stops.

"It's one of the toughest positions on the field because you constantly get double-teamed and don't get the glory," Laurent said. "From a fan's perspective, my job probably doesn't look like I get any rewards or attention but I have to buckle up my chinstrap when I come to work because if I don't, I could let my team down."

Laurent, 27, has rarely let the Ticats down since joining the squad as a free agent last year. The Montreal native had a career-best nine sacks in 2014 and was named the East Division's top Canadian.

The five-year CFL veteran has three sacks this season heading into Hamilton's home date Thursday night against the Montreal Alouettes. The Ticats (6-2) look to not only improve to 11-0 at Tim Hortons Field but earn their sixth straight win overall.

Hamilton's defence has helped propel the Ticats into a first-place tie with archrival Toronto in the East Division. The unit has scored eight TDs this season, three off the league's single-season record.

The Ticats have also returned six interceptions for touchdowns, one behind the league mark. And defensive co-ordinator Orlondo Steinauer says it all starts up front.

"It's a vital part of any defence," he said. "It (defensive tackle) is a thankless position because we basically say you shorten your neck on every play.

"They've got to be able to read offensive linemen and hold their point of attack and in this league, of course, also be able to pass rush ... so if you find that rare skill where a guy can consistently do that over time, then I think you've got a special player."

Laurent's ability makes him special but his passport makes him invaluable. He starts at a position usually reserved for Americans, allowing Hamilton to use an international player elsewhere.

"We think all of our guys are football players but this game says you need to start seven Canadians," Steinauer said. "It's important you have ones who are great and he's a great one."

Given the demands of the job, Hamilton rotates players through to keep them fresh. But the other three — Hazime Hazan, Bryan Hall and Michael Atkinson — are all Americans, with Canadians Brian Bulke and Linden Gaydosh both injured.

Quality defensive tackles are not only strong enough to effectively engage but also have the quickness to get upfield while reading a situation on the fly and reacting accordingly. All the while, they patiently wait for a much-anticipated one-on-one matchup.

"Every now and then, depending on our defensive co-ordinator, sometimes he might set it up for you to have a one-on-one matchup," Laurent said. "That's your reward for all the sacrifices you make. But when you get it, you have to win it."

Another reward is receiving kudos from teammates who understand and appreciate the sacrifices being made up front so they can shine.

"When you get double-teamed, all the glory goes to the linebackers," Laurent said. "But that's why I really appreciate (Ticats linebackers) Simoni Lawrence and Taylor Reed, because any time they make a play they always say, 'I appreciate you taking a double-team for me.'

"It's a sacrifice we're taking for the team but it's a good reward at the end."

Hamilton's defence has also been opportunistic with 30 turnovers and 13 interceptions, both league-leading totals. The Ticats have also scored a CFL-best 118 points off turnovers.

Montreal's offence is led by rookie starter Rakeem Cato. Traditionally, defences facing a first-year quarterback try to amp up their rush to rattle and hurry the passer, but Laurent said Hamilton is also mindful of Cato's mobility (6.7-yard rushing average).

"As far as rushing the passer, we have to be sound because he (Cato) is really elusive so we have to stay in our gap," Laurent said. "But coach O (Steinauer) has a plan for (Cato) so we're just going to have to master the plan."[/b]

This is what a Coach on an opposing team said about Ted Laurent
"You guys (media) don't look at film. We (coaches) do. Ted Laurent is the best Canadian player in the league."

You beat me to it.

Believe me when i say this Teddy. We the fans notice!! :rockin:

Teddy the Laurent-ians. Too lame?

You beat me to it.

And, the part where Ralph Dan refers to “Hazime Hasan.” The errors in that one sentence are pretty glaring from a football reporter who is in the CFHoF.

Crap! I missed that. One too many beers while watching the Jays. :?

Here is an interesting stat, crediting our interior D-Line

Stops on 3rd and 1yard

"The Hamilton Ticats' defence - to absolutely no one's surprise, I would suggest - leads the league in stuffing third down conversions. Opponents have tried it ten times on them this year and been stopped on seven occasions."

"Some of the failures to get that yard, however, come down to no more than offensive line versus defensive line and there is a general feeling that the interiors of offensive lines across the league are simply being out-performed by their defensive counterparts. With fewer quality surges by the O-lines, extraordinary interior defenders like Hamilton's Ted Laurent and Bryan Hall and Edmonton's Almondo Sewell and Eddie Steele are winning the battles, robbing sneaking quarterbacks and diving running backs of the room they need to manoeuvre."

If it wasn't being retired tonight I would humbly suggest that Ted would be worthy of wearing # 68. He epitomizes everything Mosca. 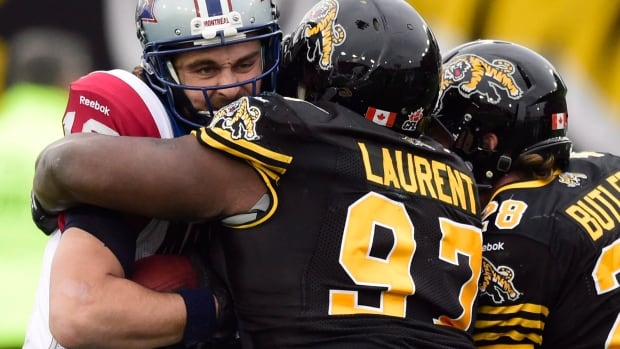 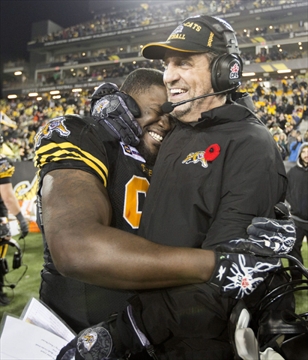 to quote Russell Peters "Somebody Gonna Get a Hurt Real Bad"

Imagine the carnage when Brian Bulke comes back healthy?

Believe me when i say this Teddy. We the fans notice!! :rockin:

Teddy the Laurent-ians. Too lame?

I try to keep my eye on the line lately because the backs are just too confusing.
Ted is like a blackhole for the opposition.
They try to stay well clear of him running & passing the ball.
How could Montreal let their hometown free agent go?