Another road game for the Cats as they face the Esks in Commonwealth Stadium. Although it isn't in the realm of a "must win," there needs to be improvement in many areas for Hamilton. For me, the play of the O-line has been brutal and cannot continue. The Esks are looking good with Mike Reilly in the saddle and I think we will have to put 30+ on the board to win. 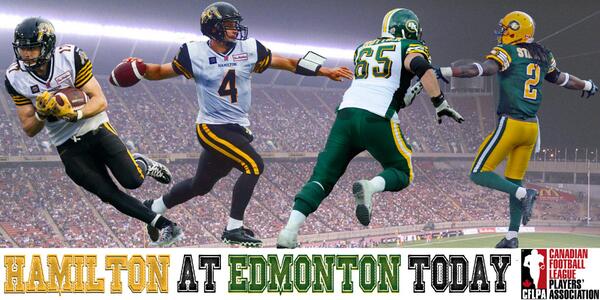 Here is the betting line

Speaking of poor performances, Hamilton’s performance last week was worse than atrocious. The Tabbies were physically out of sync in every department and mentally they weren’t prepared either. One would have to go back deep into the archives to find an opening day performance with less emotion than the Ti-Cats brought to Saskatchewan. Hamilton was seeking revenge for their Grey Cup loss at the same venue but instead had their rear ends handed to them play after play after play. The end result was a 31-10 defeat, which is a flattering score to Hamilton. Just like the Alouettes, what we have here is an over-reaction to that game. In other words, how can the Tigercats be a bigger dog this week than they were in Saskatchewan last week? This line is based on those results and that provides us with a good opportunity. No chance that the ‘Cats will be that bad again. Football is a highly emotional game and teams’ have a huge propensity for bouncing back after a horrible showing. Hamilton is loaded with offensive talent and has spent the entire week working vigorously on correcting their mistakes from last week. You cannot overcome 201 yards of total offense, four fumbles and an incredible 17 penalties for a loss of 148 yards. The Tigercats front office and coaching staff are no dummies. They went out and got Zack Collaros for a reason. Collaros is so much better than he showed last week and we’ll put that to the test this week. This is a good football team that had an awful, awful opener. A response is in order.

Meanwhile, Edmonton may be feeling a bit too high after an opening week win in British Columbia. Remember, this is a team that won just four games a year ago. Despite last week’s win, Edmonton was not that great against B.C. In fact, Edmonton only generated 295 yards of total offense. That’s a bad number that is overlooked because they won. That victory last week was more a case of the Lions shooting themselves in the foot time and time again. Edmonton also used two “trick? plays to burn the Lions last week, one a fake FG that led to a TD and the other an onside kick that Edmonton recovered. Take away those two plays and the result may have been different. Edmonton has a new coaching staff that benefitted greatly from a mistake filled game by the Lions. It was a nice win to be sure but this Edmonton team is still not proven enough to warrant being a 5-point choice. The buy-low/sell-high angle is in play here. [/b]

Fred Stamps has been unstoppable against us for years. Steniauer needs to shut him down. Especially the short crossing routes that turn into lots of YAC yards.

With Gord Miller and Dunnigan doing the Lions - Als game - does that mean we are getting Rod Black again? I don't mind him as much as a bunch of posters here - but I know I'll get bored and/or irritated with all the posts that will appear here saying things like 'That f...... Black needs to just shut-up' or variations on that which will undoubtedly appear every third post here - especially if we fall behind.

I'm one of the "bunch" who can't stand him, he is worse than nails down a chalkboard, I hope to hell he is not calling the Cats game!!

Half - if it is him - can we just agree in advance that he is going to drive a bunch of you bonkers - and take that as a given and not have to post about it.

I'm one of the "bunch" who can't stand him, he is worse than nails down a chalkboard, I hope to hell he is not calling the Cats game!!

At least Proulx won't be the ref!

Half - if it is him - can we just agree in advance that he is going to drive a bunch of you bonkers - and take that as a given and not have to post about it.

lol.. I make NO guarantees!!

I can only bite my tongue so long before it REALLY hurts and I have to yell!

If this is how the O-Line is going to play, I might as well just go to bed now.

If this is how the O-Line is going to play, I might as well just go to bed now.

Two rookie Int's on the line (I think they are both Int) - Alford and DJ Young. They HAVE to start protecting Zach.

We are just awful already!!

Not an auspicious start! that int was on Tasker though IMO. But looked like a late hit on Collaros and no flag :x

offside on the stuff!!

Bonehead play by Plesius to lineup offside. Costs us a touchdown.