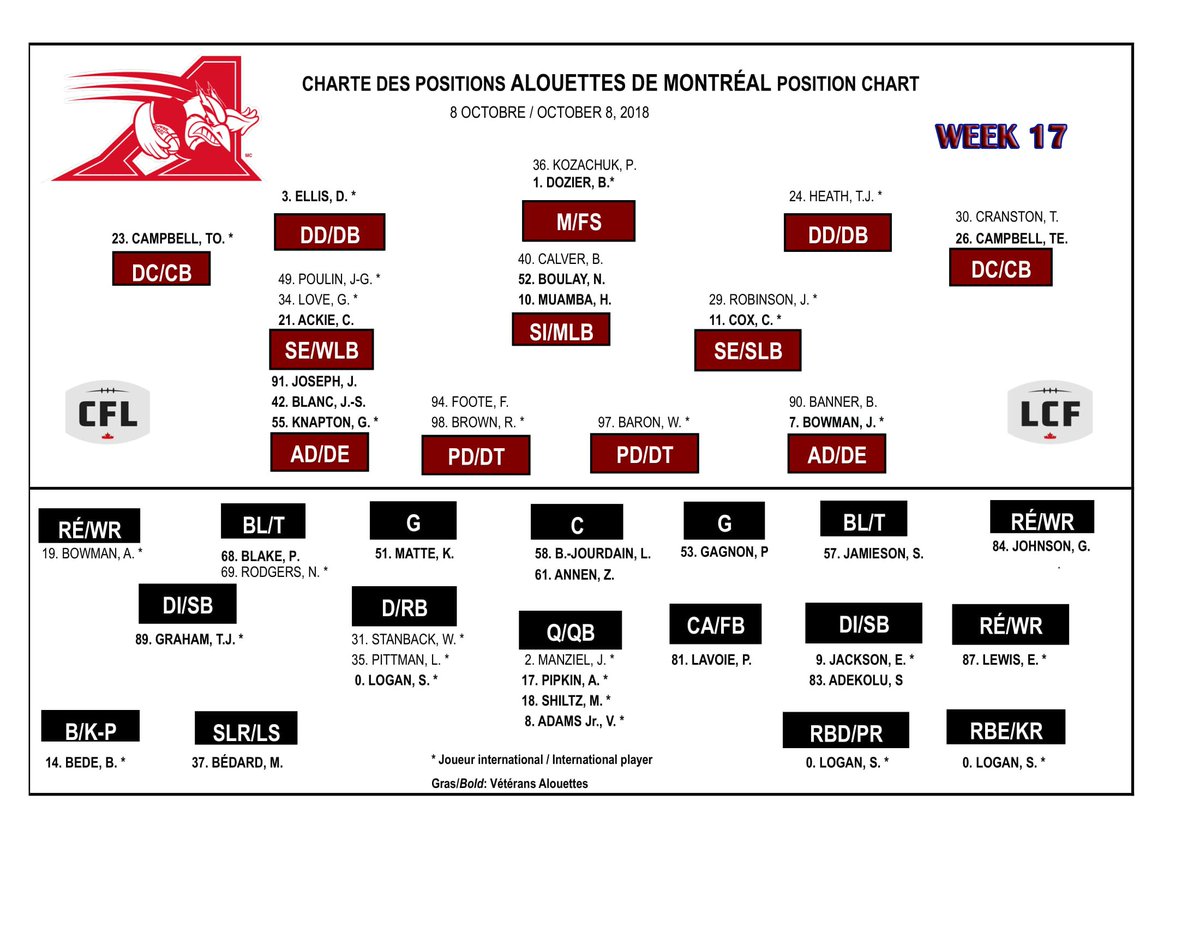 With Tony Washington Injured, the Als will go all non-import with Blake, Matte, Brodeur-Jourdain, Gagnon, and Jamieson. Team used the combination in the 2nd half of the Rider game.

On paper, speedster Trevor Graham does not seem like someone who would benefit from the improvised plays from Johnny Manziel. In these last weeks, many of the completed passes downfield seems to be the ones where the receiver catches ball punt-returner style.

Another revamp of their already porous OL and the absence of their top receiver will seemingly make in difficult for the Als to put up even average numbers on offense.

Image on the to left corner of the depth chart confirms the Als will be returning to the single color red-color sticker for their helmets this week.

-Home team has won the gave the last 10 times in this series. Stamps have not won in Molson Stadiumsince 2013.

-A loss would eliminate the Als from the playoffs and extend that streak to a team record 4 years in a row.

-Home team has won the gave the last 10 times in this series. Stamps have not won in Molson Stadium since 2013.

-A loss would eliminate the Als from the playoffs and extend that streak to a team record 4 years in a row.

How wrecked of an organization do you have when you can't make the playoff for four consecutive years in a league where 3 of 4 make it !?

WhenKavis Reed took over as GM (just last year), the Als were talking hosting a playoff game and playing at Olympic Stadium once a season. When will that happen?

When Kavis Reed took over as GM (just last year), the Als were talking hosting a playoff game and playing at Olympic Stadium once a season. When will that happen?

They are still at least two seasons probably 3 from making the post season. They will be lucky to have enough fans by then to keep the lights on.

Reed sucks and so do the Wetenhalls. RIP les moineaux!

As many of you know on this forum,. I’m a big ND fan, and they are ranked no. 5 coming off a big W against Virginia Tech on Saturday.

Notre Dame has a storied franchise when it comes to football and every year they scour the country for top-flight HS players to commit to ND. Of course, they have the big budgets, corporate sponsorships, alumni…to fund all of this. There have been lean years to be sure, but by and large, they are able to field a competitive team on a fairly regular basis.

What does this have to do with the Als? They are a professional organization trying to compete for fan appreciation in a league with notoriously low budgets, a small fan base, trying to find a niche in a sports market that is super-saturated with hockey! Any team other than hockey has to be a winning team to draw fans.

My point? I don’t see any real commitment to build a winning team and a commitment to draw fans to football. The two biggest cities in the East with populations of 3,000,000+ have trouble drawing 20,000 fans for home games. That tells us something, doesn’t it?

The CFL definitely has a good product to offer, but I’m not sure about the level of commitment on the part of the management, nor fan interest. I hope that will change some day, but I’m getting old…

Pre-game on RDS, Tommy Campbell said the Als worked on better tackling habits in practice this week (as much as pads free practices allow) … shouldn’t they do that EVERY week?

Well yes, but especially after that abysmal “tackling” display last time out.

And now notice an inexcusable interception.

Trying to make too much happen

Actually the interception was totally wobbly

“directly into Calgarys arm” is unfair IMO …Manziel was forcing the play (and failed to lead Jackson) but it took a very good play by the Stamp to get the ball … “directly into hands” was JM’s very first interception on his very first pass, against Hamilton

… And every pass Johnny has thrown has been caught.
LOL

Calgary best team against the run in the CFL … and with another makeshift OL it likely won’t change this afternoon.

0-0 after one quarter … better than I expected