Solomon Elimimian is a Rider

… I don’t get the Westerman $$$, does anyone think he will perform to that salary level this coming season? …

I certainly don’t. Study his stats:

And, at 34, he’s the oldest guy on the roster … more than a year and half older than our second oldest (Crawford).

Hmm…if Westerman’s 220k salary is still held against our cap despite being paid alot up front then I think we need to either renegotiate his contract or cut him and sign him back for less like 170 k or so.
I am also not sure what they are going to do about Tracy if we only start one import at DE.
Tracy would be too expensive as a backup.
We also need to bring in a RB or two aftee cutting Alex Green and Justin Stockton.
Cutting Csppiciotti make sense due to age, salary and performamce and cutting Whitlock makes sense makes sense now with the signing of Dylan Wynn.
Cutting Alex Green doesn’t make sense just yet.
And signing Tracy and not altering Westerman’s contract doesn’t make sense to me either.

I wonder if Rycker Mathews might be coming back after being cut by the Patriots a few weeks ago.

I also wonder who are the leading candidates to return kicks ?

Should be a very interesting training camp with open competions at both Offensive Tackles, running back and a few spots at receiver with Saunders injured for half the year and Bralon Addison still unproven as well as the one Defensive End position not occupied by J’Gared Davis and middle linebacker , SAM linebacker, the strong side cornerback opposite Breaux and halfback opposite Brooks as well as safety if Odelke and Bennett do not take the SAM posiition they will challenge Daly and of course kick returner is wide open.

I wonder if June Jones might be upset that Alex Green was cut as he really liked him and Green knew his offence well from his University career in Hawaii and time spent with the Ticats.

I don’t care what the Ticats pay Westerman. He has proven that he can be a sackmaster, and he is Canadian. I think when he is thrown in there with Laurent, Wynn, and J’Gared Davis, I think Ticat fans will be pleased with the results. MORE SACKS.

Cappiciotti started ahead of Westerman in his time as a Cat.Cappiciotti the starter who is younger and cheaper was cut.

Still head scratcher to me.

Not offering the same drunken sailor money that a desperate team offers doesn't mean you "lowballed". It means you're not as desperate or dumb.

My response to your earlier post was not an endorsement for the Cats to blow their budget signing Solly.

Instead it was a commentary about the fact that if Elimimian wanted to start a bidding war between two teams for his services, then he should not have used the Cats. Burke and Allemang appear to be on the frugal side of spending (not drunken sailors) and as a result the Riders were able to sign Solly for much less than what he thought he might get. 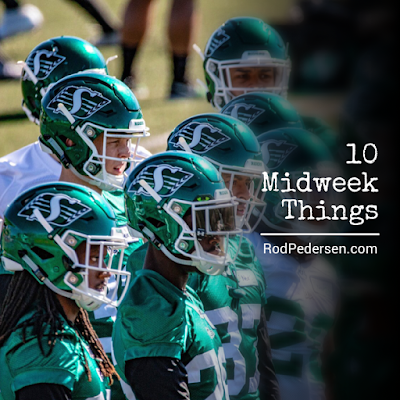 7 - HONEST ED: BC Lions GM Ed Hervey is being roasted for saying he didn’t re-sign LB Solomon Elimimian because he believes Sol’s “time is up”. Why is Ed being so heavily criticized? It’s too early to say if Hervey’s wrong or right. Elimimian hasn’t even been on the field yet in Saskatoon.

He’s reportedly visiting teams to describe terms of the new CBA. There’s no one else in the CFLPA to do that? Isn’t it more important to be on the field with your new team? Strange. … Meanwhile the Canadian Air Force has yet to take off. Canadian Rider receivers Mitch Picton, Justin McInnis and Brayden Lenius-Dickey were all on the team’s Tuesday injury report.

"7- HONEST ED:BC Lions GM Ed Hervey is being roasted for saying he didn’t re-sign LB Solomon Elimimian because he believes Sol’s “time is up”. Why is Ed being so heavily criticized? It’s too early to say if Hervey’s wrong or right.Elimimian hasn’t even been on the field yet in Saskatoon."

I watched the Saskatchewan game this past weekend and felt that Sol looked a little out of place out there. To be fair, it was his first game in a while, new digs etc.
Also, we all saw that play where Sol is slow getting up, wincing, and clutching his wrist.

Maybe Hervey knew something that 8 (well 7) other GM’s didn’t know yet?

And finally, maybe Allemang and Burke are better tire kickers than we have given them credit for