Should CFL teams take a crack at Johnny 'Football' Manziel?

[b]JOHNNY ROTTEN: It’s too bad Cleveland Browns (nee Texas A&M) quarterback Johnny Manziel got dibs on the “Johnny Football? nickname before hockey writers in Calgary could bestow “Johnny Hockey? on Flames’ brilliant Johnny Gaudreau. Manziel, who appears hopelessly addicted to booze and gambling and who knows what else, has been a bust by every criteria known to man. Gaudreau, meanwhile, has been a delight whose nickname may always (or until Manziel is no longer in the headlines) feel like copyright infringement.

Manziel once looked like a natural for the Canadian Football League; now, assuming he is well on his way to throwing away an NFL career — give or take the rumor about the ethically-challenged Dallas Cowboys — a CFL club would be taking a huge risk to go anywhere near him (see Lawrence Phillips, Art Schlichter, Todd Marinovich, et al.)

WIKI-LEAKS: Had forgotten, until looking up Marinovich’s record, that the former USC-L.A. Raiders QB’s comeback from a drug-plagued career included CFL stops in both Winnipeg and B.C., where (per Wikipedia, not always reliable), by now addicted to cocaine and heroin, he cut his hand badly on a crack pipe at halftime of a 1999 Lions game, had to covertly bandage himself, and was still asked back the following year, but knew he was done.[/b]

Agree, CFL would be wise to stay clear of him for the time being unless he is on the road to a successful recovery.

I would take a shot at him, but under a close eye. The CFL would get a boost IMO, from American viewers ,which means many may stay with the league and get even better tv deals in the future. But going to montreal might not be a good idea. Regina might be a safer place for him to start. lol

Does any team CFL have his rights anymore?

Saying that, I don't see the big push to get him up here. Having another media frenzy for another high profile name that can't cut it in the NFL will do this league any good.

Would he even want to? Are WE big enough for Johnny? :roll:

Regina might be a safer place for him to start. lol

Hey pikk, you must be grooving in a cave with a Pict with a statement like that

It would cost Manziel more money to keep up his lifestyle in Canada than the CFL would pay him. :lol:

The O.P should have put the quotes around "Crack" rather than "Football" in the title IMO.

IMO, Leave players like that in the USA. CFL doesn’t need or want the attitude and Psychological problems
Besides, the CFL has plenty of excellent QB talent with excellent attitudes and no Psych problems.
Man what’s with wanting the CFL to adopt losers…geeeeeez :?

He has the physical skills and had the ability to throw on the run with great strength and accuracy . He just doesn't want to be a pro football player bad enough it appears and that's the NFL .

Maybe he has been fighting with himself for a long time now and it's finally caught up to him . Too bad . If he cleans himself up and shows promise and humility then give him a shot . Just not right now . Wait and see what happens . Were definitely a league of second and third chances if he is willing to play for CFL money . Just please do a background check before signing him that's all I ask .

The guy is a piece of deer dirt, and even that is an insult to the deer!

If he can't play there no chance of playing cfl.

Unless Hamilton trades his rights away, he can only sign/play for Hamilton.

We have no need for his talent and his personality definitely does not fit our teams culture, so barring a negotiation list trade we can pretty much put this one to bed as "he's never playing in the CFL"

Yup !!!It's sad, the only team probably STUPID enough to sign "Johnny" would most likely be those Alouettes with Popps track record of signing special needs projects. By the way Drummer you could add Lawrence Phillips to your list......remember him??? :oops: :oops: :twisted: 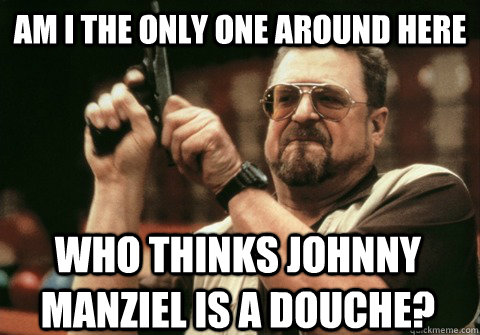 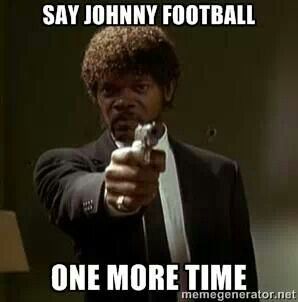 Even if he wanted to come up, he's carrying way too much baggage. Unless someone is desperate for a QB and wants to give a gift to the Ti-Cats, I don't see this happening.