SASK Cold Weather will be a huge factor

I wonder what players on the Ticats are ready for this cold and which ones are not ? We might have some lineup decision based on the weather

I keep thinking they might need to play Bowman and Plesius alot as they need to stop the run and because it will be so cold and the run game will be more of a factor and both these guys know cold weather especially Bowman from days in Winnipeg..

Did you read this about Boudreaux...i hope he can react to the cold ok

Before he came to Hamilton, the coldest place Brandon Boudreaux had ever been was Kentucky.

Born and raised in Alabama — he played his college ball there, as well — the Ticat defensive end is just coming to grips with what awaits him in Regina, where temperatures are supposed to dip into the minus-15 range, with even colder wind chill. That's the high, by the way.

"I've heard that it's the end of the world and experiencing an ice age," Boudreaux said Monday, wearing a nice leather jacket that's likely to shatter in the cold. "I feel like there's nothing I can do to prepare me for this weather."

Head coach Kent Austin, who both played and coached in Regina, said he'll talk to his young players about how to deal with it. "One of the things, especially the skill guys that haven't played into before, they typically miss the mark on either putting on too much stuff or too little," Austin said. "What they need to do is find the happy medium early in the week."

time to suck it up boys..

Grey Cup champs is worth a little frostbite!!!

I really doubt it will be a big factor at all. Its the Grey Cup, if you use weather as an excuse then you're already bringing a loser mentality. The weather effects both teams, not just one.

Weather will play a very small role in the game, if any. Sundays high is -3 and the low is -12. It's not expected to be real windy either, 15Km wind.

The Tiger-Cat player’s will adjust to the cold and be prepared that’s not the problem.

I think it’s more of the crowd noise of 45,000 plus screaming Rider Fans that will be the problem, if the Tiger-Cats can score early and TD’s, not just FG’s and play ball control like they did against Toronto they will keep the fans out of the game or certainly a lot less cheering as opposed to if the Riders score and take control, the fans will hound the Cats all game long if the Riders take the lead and control the game.

Riders are heavily favoured of course and especially playing at home for the Grey Cup, I hope they are too overconfident going in to the game and feel it will be a cake walk against the Tiger-Cats as many Rider Fans are suggesting on the blogs, plus the Riders are the Trash Talk kings of the CFL, a great motivator for players to play to a higher expectation and why not the Cats have won every game we have been the underdogs in the playoffs.

I agree cold weather will be a factor, 2 years ago Hamilton was playing Winterpeg and Hamilton was the better team, but Glenn couldn't hold the ball and ultimately lost the game. Let's hope it's a warm day and not too windy.

I agree cold weather will be a factor, 2 years ago Hamilton was playing Winterpeg and Hamilton was the better team, but Glenn couldn't hold the ball and ultimately lost the game. Let's hope it's a warm day and not too windy.

Henry Burris has played in Regina and Calgary and will know what to expect and how to prepare for the cold there. Kent Austin also knows the weather in that area. So does Congi, Fantuz.

Kent will have this team prepared for the cold, the noise, and whatever else may be waiting.

Not to worry actually. I called the weather people and ordered a Chinook to be delivered about noon Regina time. 4 hours to warm up everything and a mild evening.

Not to worry actually. I called the weather people and ordered a Chinook to be delivered about noon Regina time. 4 hours to warm up everything and a mild evening.

Was it hard to eat supper with your tongue in your cheek?

Checked log term and it could be + 2 deg :thup: which would be great and lucky

Check it out doesn't look too bad. 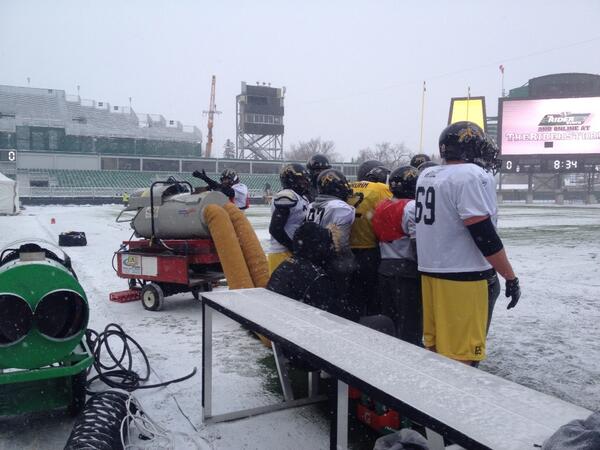 From what I see on the Ticats Facebook page, it looks like Fantuz is ready to go. Everyone else is bundled up at least a bit, but he's out there with shorts and no sleeves.

Bartel, on the other hand, does not look thrilled to be out there. Maybe wondering why he thought playing in Canada was such a good idea?

And sorry for those without Facebook. I can't figure out a way to link to the pictures.

The Weather Network has a high of -1 Sunday which is WAY different than this whole week leading up to the big game where the highs are closer to -15.
Practice in the frigid and Sunday will feel balmy.

Both teams playing have same weather, football has come a long way there are ways to dress for the cold its no big deal to be 100% honest when i played i LOVED the cold

The game is played after 5pm which means there will be no sun so the temperature will be around -10-15 with the wind. It will not be warm.

However the bigger factor will be the crowd. I can tell you that the 2009 WF Burris had problems with the crowd noise and that was with 31000 fans. It will now be around 40K Riderfans and this game is for all. I will be at the game and I am half expecting to be standing most the game because of how amped this crowd could be.

If your team isn't winning, that kinda of cold will suck the life out of a crowd. Get ahead early tabbies.