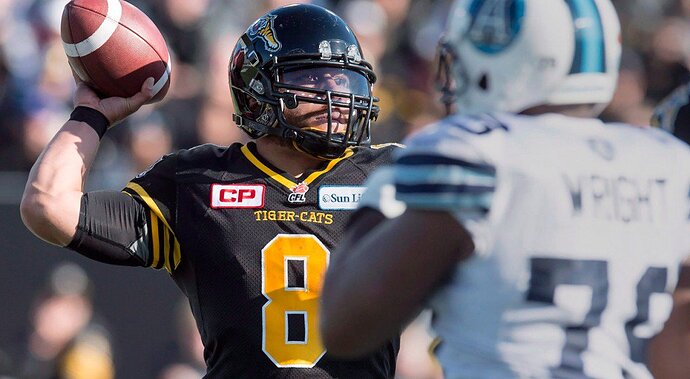 I HEARD REDBLACKS ARE LOOKING FOR COMPENSATION!

If only I had a time machine. I could make a lot of money betting people just a couple of months ago that they'd be happy with this news.

And yes, I am happy with this news. While I figured he was a capable quarterback, I was not terribly impressed with the multiple turnovers in his early games with the team. But after watching him run the team at the end of the season, I have to say I was impressed.

I think that Jeremiah is our second best QB. Hopefully he will get to show this over the next two years and perhaps earn a starting opportunity elsewhere. I thought in addition to not playing very well in 2014 that he lost his confidence.

2015 has allowed him the opportunity - which he took in both hands - to get his confidence back. If Zach is unable to start the season (still recovering from his ACL) I know we'll be in good hands with Jeremiah.

Welcome back sir (if you read this).

It's a good move because there is the possibility that Zach may not be ready to start the season.

Good move to get Masoli Oil back, showed some cool talent filling in for Zach. :thup:

I'm thinking that Jeremiah's skill sets are an ideal "change of pace" from Zach or Jeff. When Jeremiah is in, it opens up the run possibilities, plus he brings the threat of a pass, as we saw against Ottawa in the final. I think keeping the play packages designed for him to close out last season gives a wide set of options that contrast Zach, whereas Jeff brings basically the same skill set as Zach.

I'd like to see Jeff used more on third and short or goal line plunges because his height and weight give him the advantage over Jeremiah, and it saves Zach taking those extra hits. Eighteen games is a long season for any QB, and having Jeremiah spell Zach for a few plays each quarter with a different look, could make a big difference over the course of the season.

I never liked the end around with Speedy B, and it rarely worked for positive yards. I think Jeremiah could improve that part of our game as he can run it as an option, run the QB draw or just a simple keeper. Also gives options inhanding off to the running back. Plus, as I said, he has that pass threat to keep the defence honest, or to catch them napping if they don't respect it.

Yeah, I bet Matthews is still on his entry contract. I doubt Masoli is going to be making assured 2nd tier QB money, but it's one of those things that's good to have both guys competing for the position.

happy to see such a guy back. a legit player!

Jerimiah adds another dimension to our offense in Hamilton. The 2015 season revealed that he can pass and run with the best of them. His running particularly is a threat to op[posing
defenses. (4.8 yds/carry) :thup:

Seems the "rumour" is finally official.

Glad to see Masoli back and hope that he continues to shine when he has the opportunity! He seems happy to be remaining in Hamilton.

Mathews is good but still raw so for him having more time to develop as a pro is a good thing.
@Palmer - Mathews was regularly used for short yardage, especially on the goal line, and did well. I agree, having him take on that role is a good move, although Masoli managed pretty well when he had to run short yardage.