for those who have seen this, im sorry if this is old news, but this is the first i've seen of this.

dg, I didn’t realize that a stadium is proposed as well! Excellent find, this is the first I’ve heard of a possible stadium attached to this project. :thup:

i found some pics of the proposed roughrider stadium aswell;

I have my doubts that Riderland will ever be able to get something like that built but man, if they do, super!

its a little too ambitious.
would be awesome if it happened, though.

same can be said for that quebec city stadium & arena proposal.

i saw some pics of laval's stadium expansion...shame its too small to ever house a permanent CFL team.
after expansion, it seats 12,500.

theres TOO ambitious, then not ambitious enough: 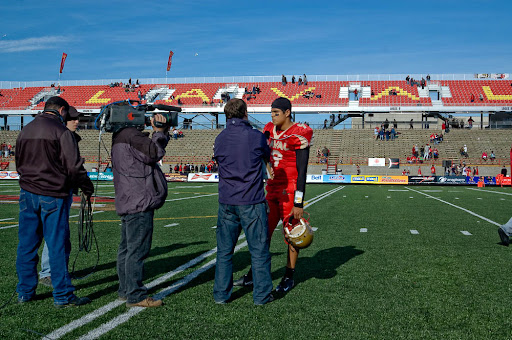 Can't help but notice on page 8 of the report they talk about the "success" of the then called Corel Centre's distance from the center of the city :roll: when most fans in Ottawa hate the fact the arena is so far away. In modern times almost nobody is building sports facilities outside the city core anymore. Success? Like for which decade? The 1970's perhaps :lol:

Well today might be a little ambitious. These things DO take time.

You guys should check out this "Field of Schemes" blog, which chronicles the shady business of sports owners holding cities hostage for stadiums and money. Yup, the CFL is often cited in there too. Enjoy! http://www.fieldofschemes.com/

You guys should check out this "Field of Schemes" blog, which chronicles the shady business of sports owners holding cities hostage for stadiums and money. Yup, the CFL is often cited in there too. Enjoy! http://www.fieldofschemes.com/

Telling ...sounds like always too much opportunity for the ownership to line key local political and financial pockets and share the profits with success more with them yet bilk the public at large with more of the bill in the event of unmet high expectations.

My hometown Indianapolis and my NFL team with its state-of-the-art Lucas Oil Stadium, which either they had to build with taxpayer support for the 2008 season and with the support for the project of course increasing in popularity after the Colts won the Super Bowl for the 2006 season, or the Colts owner Irsay was threatening to split town and head for LA akin to how they arrived to Indianapolis via Baltimore in the first place in 1984 when the Hoosier Dome was built for the team.

The project ran way, way over budget and then the Great Recession hit hard starting in 2008 and the times are worse at the core right now.

This recent post about the Indiana Pacers was awesome too: http://www.fieldofschemes.com/news/arch ... eaten.html
We get this quote from Neil (The Book/Blog's Author): It takes a lot of damn gall to demand rent breaks when you're not paying rent

To be fair, isn't that the price of the total project including the stadium? So the other retail and entertainment activities should help pay for the arena over time.

Yeah, it looks different, I was going to say a jellyfish of some sort.

Football stadiums look so much better than arenas, well usually, as long as they aren't a marshmellow top like the older BC Place and Metrodome's or even the Rogers Centre egg top.

I don't understand why we need all these fancy stadiums. Why not build a simple, nice 40K outdoor Stadium, ground level, with enough washrooms for 40k. If you build it outside the city have a lot of parking allow tailgating, have shuttle buses from the downtown core on game days. Make it a day event.

Football is not hockey or baseball. regular season games matter more. and happen less often. Football fans don't need all the bells and whistles these new stadiums have. I rarely buy concessions at the RC or Ralph. I tailgate and drink before the game and seat an actually watch the game, while the game is on, then I complain about all the stupid in game promos, when the action breaks.

hey, its not us comming up with these proposals.

but if its approved, then awesome

It's a giant computer mouse!

I wonder if it has touch scrolling like the magic mouse

i wonder when this Quebec stadium proposal was dated?

well, it looks like the quebec proposal has been floating around since sometime in '05.
not sure how much progress has been made since then, or how new the renderings are.

heres a link to the site in english, if you want to sign their petition: