Please let our new jerseys be better than Pittsburgh's!

It would be good if everyone was doing a "When your team was founded" Retro week. 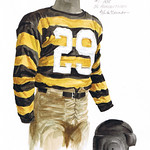 I like that look, but it doesn't seem very well suited to today's gridiron football uniforms. Lots of rugby teams still use that style (although with numbers on the back only, it seems), and it doesn't look stupid.

It would be good if everyone was doing a "When your team was founded" Retro week.

Hmm ... in 1869, the Tigers probably wore black and/or yellow woolly sweaters knit by their wives and mothers. A team photo from 1890 shows the Tigers in sweaters like these retro Steelers' bumblebees, with bumblebee socks.

By 1905, team photos show most of the Tigers in solid black, woolly turtlenecks with yellow H's on the front, with a couple of guys in bumblebees. Also, some of the guys seem to have sewn championship patches on their sweaters, like curlers do today.

When you see photos of the team in action, however, few of the players are wearing sweaters. They are usually wearing long sleeved shirts under their full-body padding, and some of these shirts are striped. Maybe the sweaters were for show rather than for play, since the wool must have been hot and easy to grasp in a game.

The bumblebee sweaters came back in the 1930s (that's the picture in the previous post), with matching bumblebee socks. The classic bumblebee sleeves were first used in 1964 or 1965.