Our Founder, Peter Dyakowski, was inspired after using one of the first commercial ice vending machines back in his student days at Louisiana State University. Since that time, he has tirelessly dedicated himself to bringing this efficient, green, labour-saving technology to Canada.

Based out of Hamilton, Ontario, Canadian Ice Vending is dedicated to bringing ICE EXPRESS to every single business in Canada that stands to benefit from this exciting technology.

Brilliant idea. You could almost call it genius.

Good for Peter. Looks like he's got his post-football career going already.

Judging by those braces he wears, I wouldn't be surprised if each of his knees has its own machine. 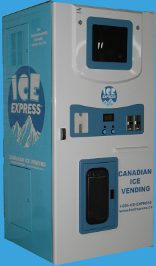 Brilliant idea. You could almost call it genius.

Peter can be now known as "The Iceman" :thup:

I checked out the site back when the CBC thing first aired. Still haven't seen one of the machines though.

"What happens if there is a run on ice and my machine sells out?
Congratulations, you have just made a lot of money! Your machine will return coins until the internal sensors tell it that there is enough ice built back up in the storage bin to resume vending."

"How come you're selling these machines for so darn little? You could be charging two or three times as much as you are? Look at how much revenue even a single machine can make in a year! What are you thinking? You must be crazy.
Brash, daring, confident, handsome. Maybe even reckless. But not crazy. It is a firm conviction in certain principles that brought our Founder to set the price that he did. He would rather have happier, more successful customers, and more of them, than to make a few more bucks off of each sale."

Get everybody on this forum to throw Pete $20.00 a piece,and we’ll all become investors and shareholders!! :cowboy: