Here's a thought provoking take on it all. . .

Thanks for posting that MadJack. Much appreciated. It is compelling reading though there are some comments he's made that I'm not in agreement with.

This is such an odd and horrific situation, I don’t really know what to say. On one hand, a guy took the life of his child’s mother with apparently no regard for human life. But on the other hand, this guy was clearly in a very dark place. For someone to get to the point they feel the only way out is to take their own life is in itself tragic. What I will never understand is why couldn’t he have spared his child’s mother. It’s such a sad and senseless outcome.

It’s safe to say there were many victims left in the wake of this unspeakable event.

What I will never understand is why couldn't he have spared his child's mother.

I'm reminded of Als player Ventrell Jenkins" who is currently in jail who beat up his fiance so badly her face was unrecognizable. This happened in mid November. By the sounds of it Jenkins almost beat her to death. At some point because of total rage at the moment one loses all sense of perspective and judgement. One becomes totally possessed with the moment. Everything else becomes a blur. He is aware of what he is doing, he is totally conscious but....... he is not thinking beyond the moment.

Thanks for posting that MadJack. Much appreciated. It is compelling reading though there are some comments he's made that I'm not in agreement with.

I feel much the same way beagle. . . compelling reading to be sure, but yes there are some things I question. . . I do not however question this, with this I am in total agreement:

The initial response focused all on Belcher, and sadly, some suggested that maybe he wasn’t fully responsible. Concussions from playing football must be the reason he killed Perkins, or he must have mental health issues, many tweeted. Why are we so quick to want to take the blame away from the person who committed the crime and find an excuse for him?I’ve read numerous stories about him and most of them painted him as this great success story who’d overcome the odds to play in the NFL. I honestly don’t care what he did prior to Saturday, because none of that matters. What matters is that he killed his on-again, off-again girlfriend in cold blood. I don’t need to hear that he was an exceptional student at university, or that he always tried to impress his mother. If he did, he failed miserably because he committed the most egregious, gutless and spineless act possible. He took someone else’s life. A Sunday morning NFL countdown show talked about Belcher like he was the victim. It disgusted me.

Here's what I have trouble with:

I think the only reason he made such a statement is that in his opinion only those men who are making their voices heard by taking a stand and speaking up are doing their job. He obviously counts himself among the few because as a man , he takes more offence to violence against women and until men in general feel the same way not enough attention is going to be drawn to the issue. However, this raises the very question you bring up.

I don't know if you are seeing the ads in you stadium but we see them at BC Place. Signage is on the playing field sidelines, "Prevent Violence Against Women". Players are speaking on the subject on the big jumbo screen. I've nothing against it but something is getting lost in the translation. Shouldn't the CFL not be promoting "Prevent Violence and Bullying" regardless of gender? I have read stories and seen news reports of females being severely beaten up, not by males but by females. I guess the argument is that most violence against women is being perpetrated by males. Perhaps that is true but I think we need to give equal attention to those on the receiving end of violence regardless of gender. That is the point I think the writer has missed.

"How many of you have sat in your men’s league dressing room and listened to a guy brag about how his ex “won’t be getting a cent of my money. I’ll make her life a living hell.? That is just one kind of violence and it is carried out by all types of men. Few, if any of them, suffered a concussion or have mental health issues."

His point is that such a comment, "I’ll make her life a living hell." wreaks with inner contempt and hate towards the ex. If such hate is there it may not be a question of if but of when could such hate be expressed in physical violence towards the ex.

That part is pretty weak in my opinion... She would be saying the same thing or something similar going the other way - it is divorce, no? 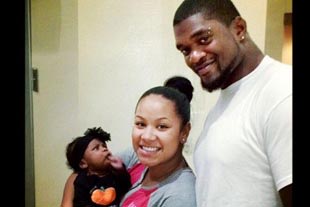 When I first looked at this picture my eyes became riveted on the little child.

Disturbing new details about the Jovan Belcher-Kasandra Perkins murder-suicide: according to Kansas City police reports, Belcher texted another woman several months ago that he "would shoot" Perkins "if she didn't leave him alone." At the time, the woman thought Belcher was joking. The information was obtained by the Kansas City Star from the case file, which is now public record.
Belcher also texted the other woman that Perkins "knew exactly how to press his buttons and make him angry," according to the Star report, and that Perkins had "threatened to take all his money and his child if they split up."
Also in the report: Chiefs head coach Romeo Crennel said Belcher had blamed Perkins for making him miss a team meeting a few weeks earlier. Crennel told the police he believed that the couple had "trust issues." And Belcher's mother told police that she moved into the house with the family because the two were having "relationship problems due to financial issues associated with Perkins' spending habits."
The report contains further details about the morning of Dec. 1, when Belcher shot and killed Perkins and then drove to Arrowhead Stadium. According to the report, Belcher first encountered Chiefs general manager Scott Pioli, and told him, "I'm sorry, Scott. I've done a bad thing to my girlfriend already. I want to talk with (linebackers coach Gary) Gibbs and Romeo."
Once the coaches arrived, Belcher never put down his Beretta .40-caliber handgun, only lowering it to chamber the fatal round. He walked away from them while Crennel raised both hands and pleaded for Belcher to stop, saying, "You're taking the easy way out." Belcher knelt behind a car, made the sign of the cross, and fired the bullet into the right side of his head.