Spencer Zimmerman as reported on Twitter may be the next Tiger Cats GM.

Spencer Zimmerman as reported on Twitter may be the next Tiger Cats GM.

That’s not really what it said, is it.

That’s not really what it said, is it.

Thread title: New GM
OP post: May be our next…
Actual source: I’m hearing…taking a role.

Breaking. …Halifax Schooners don’t actually exist nor does a stadium to house them nor does the funding of said stadium.

dork: and your point about Tillman is…???

dork: and your point about Tillman is…???

That Tillman isn’t the Schooner’s GM.

Might be a good idea to hold off on dismissing these rumours out of hand until we see what transpires in the next few days.

My reaction to all this is “hmmm” right now. I am glad to see a slow cleaning of the management/coaching house after the many years of very mediocre football. Spencer Zimmerman is quite young and was previously with the Tiger-Cats for 4 years… so I can see why his name would come up in any talk about our next GM.

So I find the Tillman situation encouraging if it means he is gone. But I would not wish him or Austin (as suggested in another thread) on Halifax, if a CFL team eventually goes there.
We’ll see.

Thread title: New GM
OP post: May be our next….
Actual source: I’m hearing…taking a role.

I think the OP covered his bases by using the word “MAY”.

Reading the profile on Spencer seems to indicate that he is a great young talent. So it wouldn’t be a stretch to insinuate he might be coming back to the Hammer for a promotion to GM.

That Tillman isn’t the Schooner’s GM.

Krisiun: I don’t think the issue right now is that Tillman will be the GM of the Schooners. A “role” is all that has been suggested in Dave Naylor’s re-Tweet.

I’d say the question now should be…are the rumours about Tillman talking to the Schooners ownership true?

And if so, is Tillman one of several other candidates for GM under consideration if a CFL team ends up in Halifax? Maybe he is being looked at for his scouting expertise instead.

I have not seen anything in the Halifax media about all of this yet. Maybe they will be chasing it down later today (Thursday) .

Don’t know about Zimmerman, but the Tillman part is apparently true: 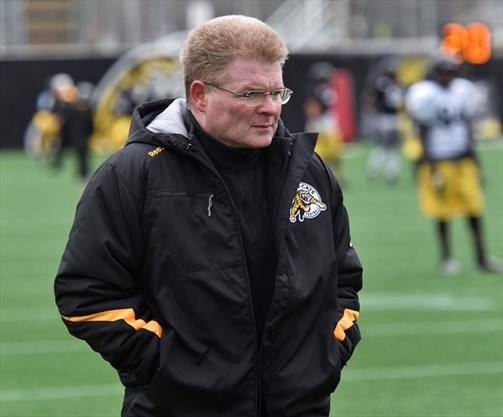 Tillman will be missed in Hamilton . His successor or successors should be Allemang/Burke . If only one is retained, then the other may follow Eric to the Schooners .

Tillman to Halifax is a great move for the CFL . Having an experienced executive with an expansion franchise is the first and most important building block for the league . Now, the league needs to ensure that the franchise gets the talent in the expansion draft to become the next Golden Knights.

I believe the Schooners just found their George McPhee to guide the new CFL team for years to come .
Now let’s start building a stadium, so Tillman can build the team .

Don’t know about Zimmerman, but the Tillman part is apparently true:

Thanks for posting, clears a lot up. Milton is the best

Apparently, Zimmerman is very highly regarded, but, I doubt he will be the full GM

IMHO, It will all be done by committee.

Grover: I share your opinion of Steve Milton. Looks like Steve got as much as he possibly could given the surprise Mitchell got when the story leaked yesterday.

A lot of nice words flying around between Scott Mitchell and Eric Tillman but when the dust clears we are left with Tillman being allowed to speak to the Halifax group about some kind of job. But it appears (unless Scott Mitchell knew Tillman would be hired) that Tillman would have been gone anyway because his contract expired yesterday (Wed).

That pretty well clears the deck now for a fresh new approach at the management and coaching levels…but I would think an announcement will be made soon about Zimmerman if he becomes GM.

All of this makes me a lot more optimistic about the direction the Tiger-Cats are now taking.

Really hoping that the uncertainty at GM is why we haven’t locked up Banks yet. Not to mention our LBs.

Interesting nameSpencer Zimmerman.
I am on a bit of an island in Ticat land in that I am not a big fan of Burke or Allemang.

It is difficult to know even what their duties have been specifically but we have mismanaged our draft picks IMO over the last few years and neither one is particularly well spoken. Fine as foot soldiers I guess but not candidates for future GM jobs IMO.

I hope I am wrong, Mitchell and Caretaker know best.

“Eric was Kent’s (Austin) No. 2 guy and when Kent left (last spring), Eric was absolutely great about working in collaboration with the other guys in football operations.”

The dumbest, uninformed thing I have read in here in quite awhile.

All of this makes me a lot more optimistic about the direction the Tiger-Cats are now taking.

I’m glad you’re full of optimism because the personnel management approach on this team doesn’t make a lot of sense.

A management by committee approach whereby consensus must be achieved before decisions can be enacted ultimately results in consensus being more important than making the best decision for the team. Add to that the absurd arrangement where your (now) offensive coordinator apparently has final say on all personnel matters. Too many cooks!

I can understand why Tillman (with his nearly 30 years of CFL management experience and three Grey Cups) would be excited to leave that scenario and start afresh.