NCAA Football is back! - Yay!

Love this time of year! CFL moving into high gear. Important Jays games almost every day. The NFL about to kick off. Premier League soccer filling most weekend mornings - and as of today - NCAA football filling my Saturday afternoon and evenings with football, football, football!. (And this weekend even spilling over to Sunday night when Notre Dame play Texas on ABC.

It has been a day long festival of NCAA football today between various TSN channels, ABC and CBS.

A very good early game between # 3 Oklahoma and Houston - with Houston pulling off the upset. Then the neat scene of a packed Lambeau Field being used for the first time ever for an NCAA game with Wisconsin upsetting # 5 LSU in a good defensive battle. Then UCLA came roaring back against Texas A&M before losing in overtime. Tonight USC stayed close for most of the first half - but then # 1 Bama started to ROLL TIDE - and are blowing the Trojans out now. .

And now halftime and Auburn are staying close at home against #2 Clemson trailing 10 - 3 at the half.

Love all this football.

Missed most of the opening weekend action,but fortunately ..or unfortunately for me as an Irish fan...I caught Texas/Notre Dame tonight and holy hell what a game. Can't even be mad the Irish lost it was nice to see a crazy football game and Texas show up on the big stage again after being MIA for a while now. I don't know if I have ever seen a crazier play than Texas taking the lead 37-35 with about 5min left in the game and line up for the PAT only to have it blocked and returned the other way by ND to tie it up at 37-37 which was the score at end of regulation. Games like these remind you why you like the game so much, I highly recommend looking up highlights.

Incredible scene at the Bristol Motor Speedway tonight. The infield has been converted to a football field and something like 150,000 are at the Virginia Tech - Tennessee game. Bristol is near the Virginia - Tennessee border almost exactly halfway between the two schools. 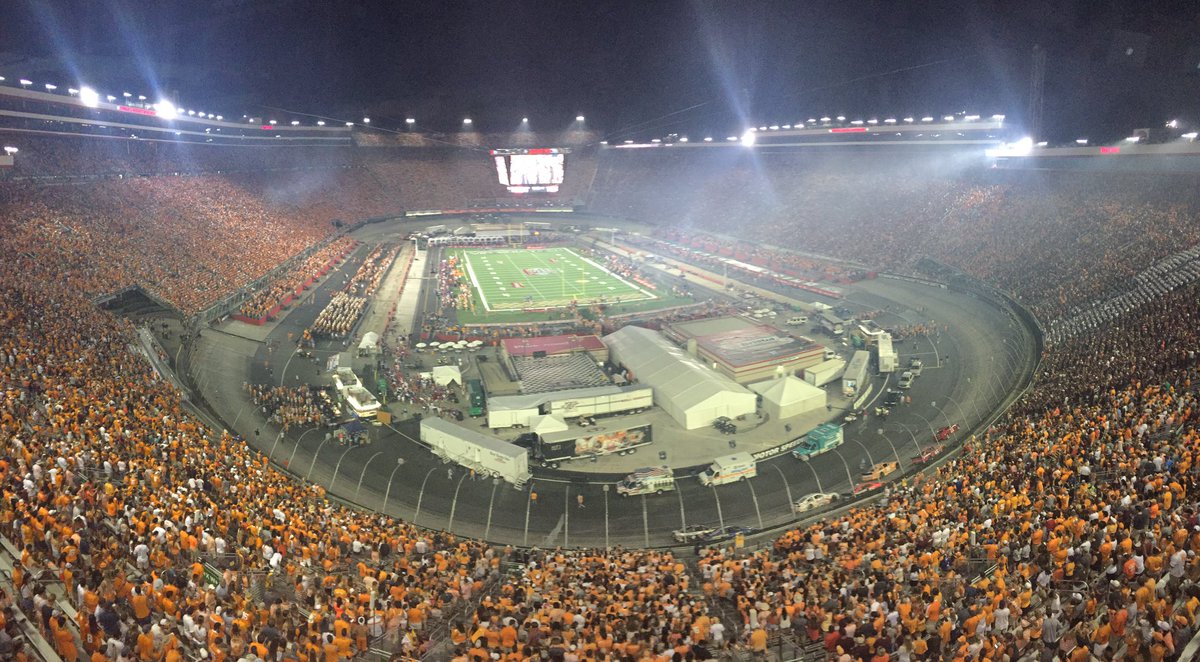 OK - the season is over for my Fighting Irish. Losing to Duke at home. And we're talking football - not basketball.

My Wolverines are back where they belong after years of struggle.

If you like exciting finishes to football games then clearly Tennessee is the team to watch.

Every game they've fallen behind - sometimes by alot (21 points today) and then they come roaring back with every game having thrilling finishes.

Today's game was INCREDIBLE. Down by 14 with less than 4 minutes to go Tennessee scored on a 65 yard drive using up only about a minute and a half. Texas A&M had a huge 65 yard play play and it looked like they were about to score the clinching touchdown when a super hustle play by a Tennessee defender punching the ball out on a desperation dive at the one yard line with the ball going out of the endzone for a touchback giving Tennessee the ball back.

Again a rapid drive down field including a 60+ yard play to tie the game. But there was still time on the clock and A&M drove down into field goal range but their kicker hooked it and missed. All that in the last 4 minutes of regulation.

A&M ended up winning it in the second overtime period to remain unbeaten. Truly an insane finish.

My Wolverines are back where they belong after years of struggle.

You guys say that every year. :lol:

My Buckeyes'll put 'em in their place....

Two absolutely crazy NCAA games last night that I caught the second half of after the Leafs and Lions games ended last night.

First in Happy Valley a very happy scene when 20 point underdog Penn State - with the help of a 4th quarter blocked punt - that led to a field goal and a blocked field goal that they returned for a touchdown - resulted in a 24 - 21 win over # 2 ranked Ohio State. And thaat led to this scene with the fans flooding the field.

Unfortunately they got a little too carried away and there were problems outside the stadium later with police arresting several after fans started rioting a bit and causing damage to property.

Then over on Fox the Oklahoma - Texas Tech game was a QB show for the ages. Oklahoma won 66 - 59 in regulaton time. That is not a score run up with overtime scoring.

Texas Tech's QB Patrick Mahomes passed for 734 yards and ran for 85 more - so he alone was responsible for 819 yards - and yet they still lost!

Here is a list of all the notable numbers and some of the records set in that game.

The teams set an NCAA record by combining for 1,708 yards of total offense. Appropriately, each team had 854 yards of offense.