As a service to ticats.ca users who play Madden football, I am posting some player information that may be of value for folks who want to create custom players and/or custom Tiger-Cat teams when applicable in their Madden versions

My roster was created for Madden 2004 PC version. Ports to PS2, PS3, XBox etc. may be possible.

Note that the uniform numbers given reflect the fact that not every one who wore a particular number in real life can share the same number on a "video game" team (e.g. #77 being the number of Hal Patterson, Tony Gabriel, and Grover Covington -- I chose Covington and issued other numbers to Gabriel and Patterson -- your mileage can/may vary).

Madden PC versions do allow for uniform numbering mods that conflict with NFL rules IF an editor such as Madden Amp is used. More information about this can be found online. A good Madden PC site is football-freaks.com for discussion re various versions, platforms, and downloads ...

The roster choices I made are a combination of my personal preference as well as Zuger9's All-time Ticat Depth Chart that I've posted in another thread. The height/weight information was taken from Internet and Ticat Media Guide sources where applicable.

Some players were also shifted to positions that they temporarily played to help "fit" them in the specific roster slots of a Madden team template. Safeties and slotbacks are two examples of this -- you have free and stromg safeties and tight ends to account for. I made Darren Flutie a WR and Rocky DiPietro a TE to get both of them on the field for my team. Again -- your team choices are yours!

I've started to blog again at my Madden custom team blogging site: http://rustyslair.blogspot.com . I've listed howtos in creating a custom Madden team in Madden 2004 (PC) which may also help customizing a Madden team in other versions of Madden. As well, you can find in-game strategy tips, screenshots, slider settings, and roster editing ideas.

Very impressive! You have my vote for fan of the year.

Football-freaks.com is pretty much the only Madden-centric PC outpost for rosters, artwork, playbooks, etc. left standing. 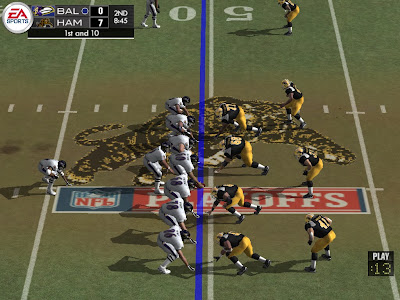 Hope folks like the insights I can give -- and also pass some along to me re recent versions of the game and any mods they've done to their Maddens.

I got my PS2 about 4 years ago at a pawnshop for about $80 as I recall. There are plenty of deals on ebay.ca and amazon.ca for different PS2, PS3, and Madden-related stuff. Madden 2005 on the PS2 is great!

Try to get Madden 2004 on PS2 if you want more flexibility in making a Ticat custom team. It pales in comparison to the flexibility one has with the PC, but at least you'll be on your way with a team with a similar colour-scheme re uniforms.

Another must: ESPN NFL 2k5. Absolutely phenomenal integration of the ESPN TV presentation into a video game! The only issues are gameplay deficiencies (re INTs and placekicking) and a buggy franchise mode. Just for the eyecandy, it's top drawer!

However, Madden's franchise mode is superior IMHO. Madden 2005 really levelled the video playing field by boosting team defence in the game. Also, it has a true coach mode like Madden 2004 in both PC and PS2 -- as I am not a joystick warrior and like instead to call plays -- it's essential for me. LOL

Copies of these are available in video game retailers still, pawnshops, and online on Ebay and Amazon. They'll only set you back $5-10 these days. I recommend getting a backup copy as well (something I need to do). I have a good Memorex Optifix CD/DVD Repair Kit that helps with any scratches you can get with used PC and PlayStation discs.

The screenshot above is from an old PC of mine. I know that my current rig will do much better in this regard, so I will add some CFL team screenshots periodically to my site and here too in relevant threads. I have extensive artwork files from various user sites, so I can pretty much recreate a CFL-looking NFL game from the 1950s to the present. Lots of fun during long winter days and interminable off-seasons. LOL 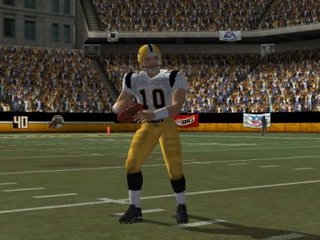 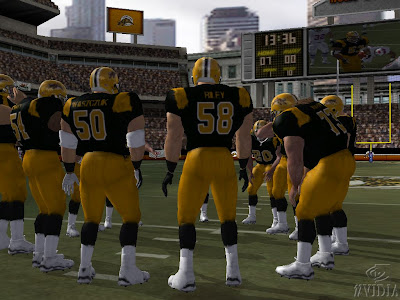 The link above is to a field turf surface I employed in the game.

A good video card and the 4.1.0.0 Madden 2004 PC patch allows for uniforms to get "dirty" as the game progresses, so having a grass field adds a nice touch. LOL

I’d totally love it if I could play this on my PS3 :thup:
Mines 120 GB so it’s not backwards compatible whatsoever.

I'd totally love it if I could play this on my PS3 :thup:
Mines 120 GB so it's not backwards compatible whatsoever.

http://us.playstation.com/support/compatiblestatus/ for a 20, 40, or 80 GB PS3 unit compatibility check with earlier titles. My Madden 2005 is not compatible with those machines, unfortunately.

I'll try to post some Madden 2005 PS2 screenshots shortly. It will be images captured via my TV card (composite mode), so the resolution may appear more scrunched than if it were fed direct into a display. 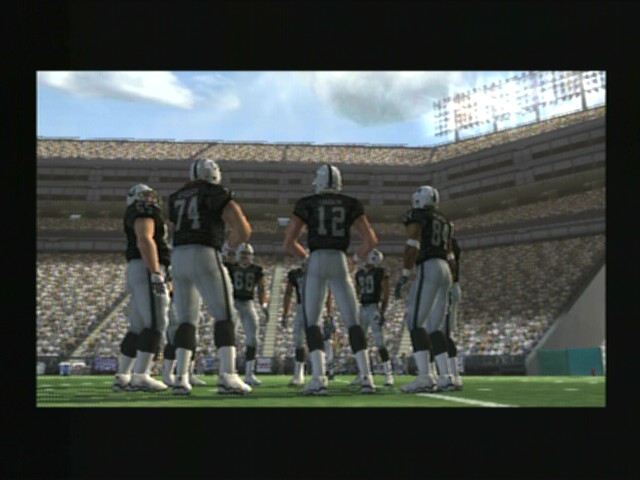 That was captured via my TV card.

One more screenshot dump for your perusal/edification: 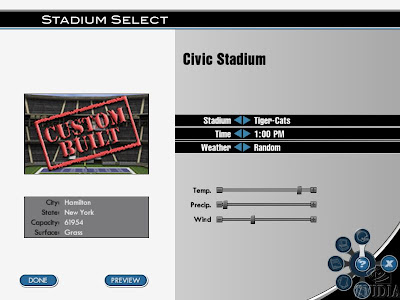 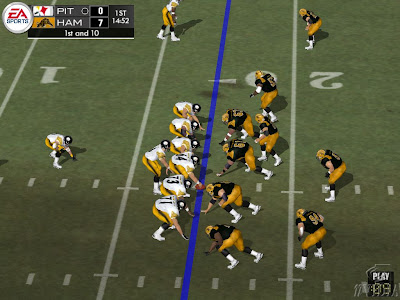 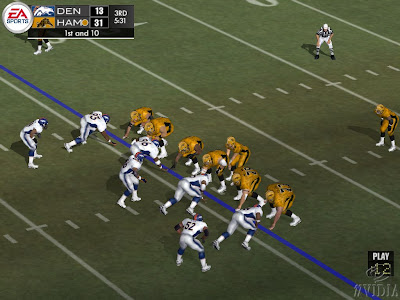 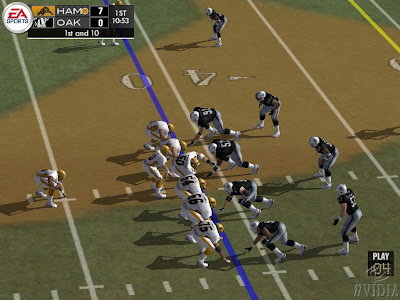 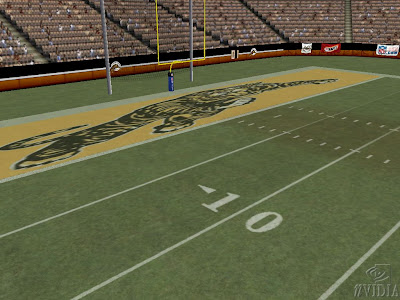 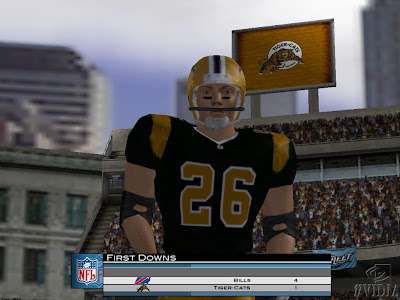 Garney Henley -- my fave Cat when I was a boy.

Many of these were taken in previous versions of that team which I made before having access to Madden Amp. Since then I've been able to edit body shapes, uniform numbering, etc. The ability to customize the PC version of the game is amazing!

). Substituting subjective rating assessments based on my fan experience watching certain players, I've improved the playability of the game in franchise mode as I've "de-juiced" a lot of the ratings of the players on it.

In addition, there is a good slider set for Madden 2004 that I recommend -- Redwolf's v. 10. I have tinkered with them to get a little more of the passing game in the overall offense.

More on this is available on my Madden blog at http://rustyslair.blogspot.com/ .

Zen, Madden 2008 had a Mac version. I can't vouch for it, but there is a playable demo available.

Of interest, check these links:

just a note of interest here, considering we are talking bout the tigercats via video games

the recnt editions of the ncaa video games have had a new edition called teambuilder where you can create your own team from scratch with many different customizable jerseys and what not, im not sure if youve heard of this but it is a very useful tool for creating cfl teams and putting them on your 360's or Ps3 and you can also do it for pc

ive endulged myself and have created some of the american teams from the cfl american explansion days and have also created a cfl allstart team for the 09 season and the 2010 tigercat team just this week, i do encourage you guys to check it out if you are into customizing teams for video game

also if anybody plays this game or knows people who do, let me know if you have any request for teams because id be more than happy to do them:)

Being an off-week with the bye, I got to tinkering with my Madden 2004 Ticat team for the PC and have updated the custom art file to better reflect the current uniforms and the look of the new stadium. I've included some screen caps for your enjoyment. 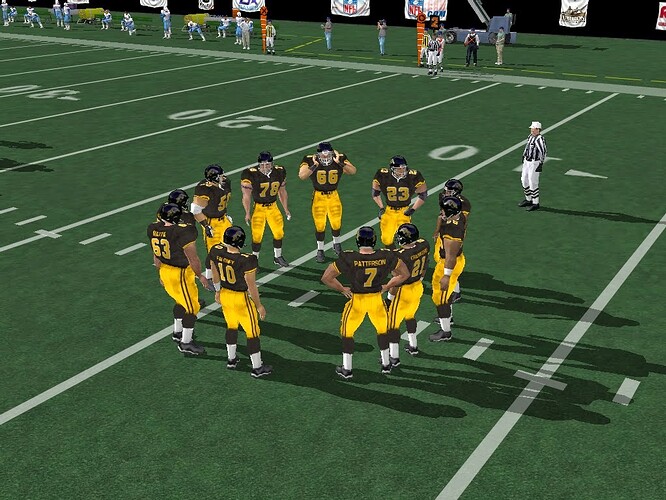 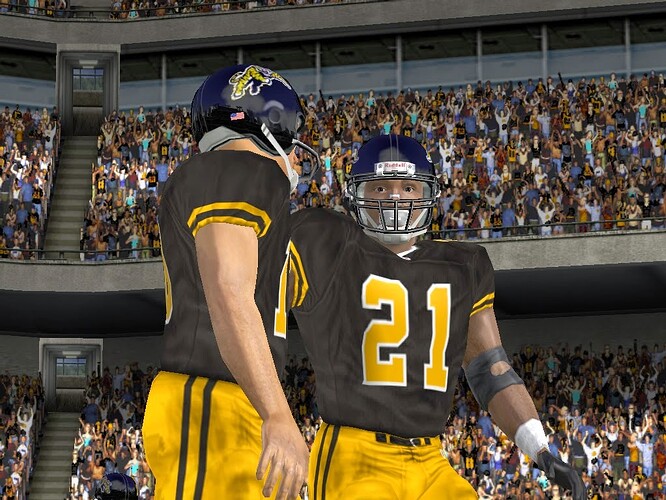 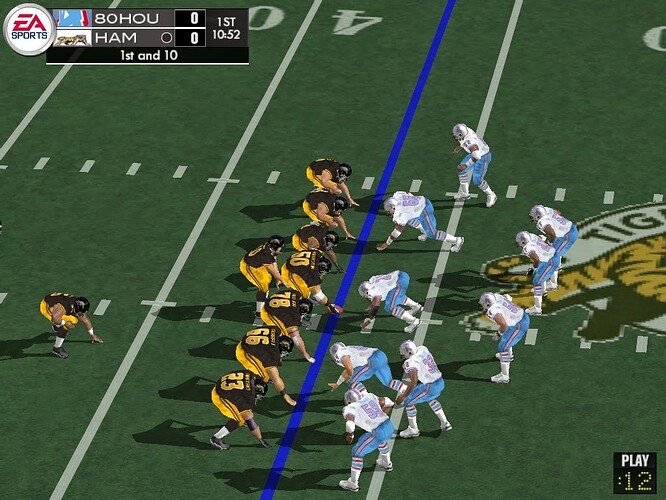 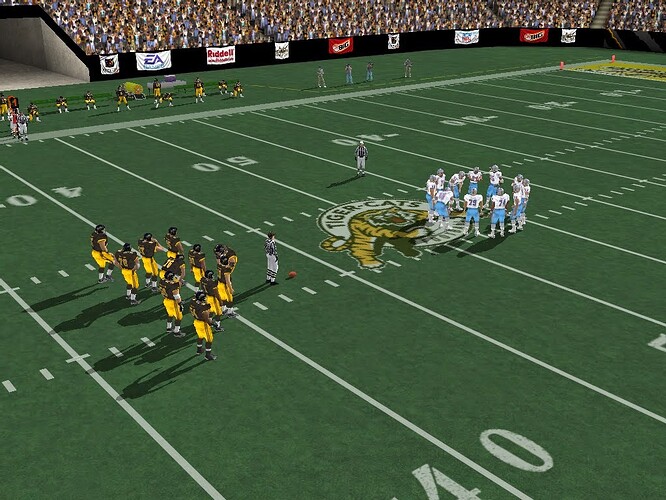 I know nothing of video games, but I like this.
Akin to watching the old games on youtube.
Why no Sanderson or Philbrick?
Philbrick with a cast on his arm would be awesome.

1024×768 131 KB
My player choices loosely folllow Zuger9's project results -- although I did make personal selections at times based on players I followed as a young Ticat fan. Obviously everyone would have their own "team" based on who they would pick.