There were black QBs who played, but I think Moon was the first that a NFL team committed to as their starter long-term.

Arguably Doug Williams did more to break the "colour barrier" than Moon ever did. :rockin:

I disagree with that.

The guy put up the numbers to make the NFL.

If another Jackie or Warren comes out of this, I'll be glad to see it.

I found it really curious that with the plays he made in the pre-season that he didn't get a longer look in the NFL.

Sadly, politics has played a role in whom makes it makes in the NFL, whether it be race, sexual orientation or even where you come from.

But, it's also a very very very popular destination or goal for almost every football aspirant. Competition being so intense, the talent level would be extremely close. Any stumble and you may be out.

Except that the Als have been pursuing Michael Sam for sometime.

Popp must feel some relief with this high profile signing for the possibility of replacing Mitchell and the distraction that the signing of Sam brings from the trouble and disgrace that Mitchell has brought to the team and the league.

This is the third CFL team for Kalif Mitchell (BC, Toronto, BC, Montreal).

Makes you wonder if his mouth and ego is bigger than any talent he may have. 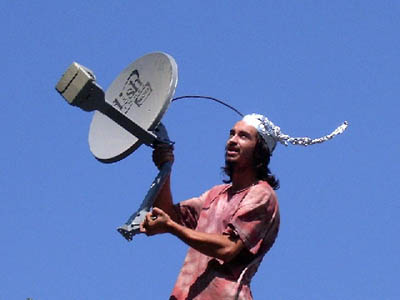 Popp has a knack for signing controversial players. So far early before the season starts, they are staked!

Besides, it's got to be tough carting the satellite dish with him when he goes a scouting!!!!

It is Joey Abrams. Jim makes him take that thing

It is Joey Abrams. Jim makes him take that thing

So where is he pointing that thing??? The Carolinas???

curious statement?! Didn’t they have the first black qb in the NFL long before WM?

I recently saw a program on Warren Moon (NFL network) and he was offered other positions with some teams in the NFL but NOT QB. He told one team (or it could have been a college) that “he was born to play QB” and refused to even consider playing anything else. Even colleges were passing on offering him a scholarship until he played a couple of years at a junior college. The biased thinking at the time was that a black QB could not possibly be intelligent enough to understand and carry out complex game plans and be able to read defenses effectively. I did not get the impression that there were ANY black QBs in the league at the time - even as back ups. In fact Warren Moon signed with the Eskimos even before the NFL draft took place, avoiding the likely snub of being passed over in the draft because of his colour.

Not sure if Sam being passed over has to do with his sexual orientation or physical size to play DL in the NFL, but like ofher players before him, if he can make an impact up here and prove that he is an effective player, he may well get another look south of the border. I do think all of the media hype is overdone though. :roll:

If Sam had not told the press that he was gay, we wouldn't even be talking about his guy right now. He would just be another ex-NCAA player fighting for a job with the Als.

Doug Williams played in the NFL before Warren Moon did.

Moon played in the NFL from 1984-2000, for Houston, Minnesota, Seattle ad Kansas City. This was after his time n the CFL. His career is rightly celebrated.

Williams preceded him. He played in the NFL from 1978 to 1989. He hasn't had nearly the recognition that Moon has, and is oddly forgotten, even as a pioneering black QB. His statistics aren't nearly as gaudy over his career as Moon's were, and he didn't set passing records or win all kinds of awards. However, he won a Super Bowl as starting QB with the Redskins, something Moon never did.

Of course not but the outrageousness of the tweet and the fact that moron is still on the team could certainly have been an impetus to get a deal done and have the media obsess over something more positive.

I watched the live telecast of Michael Sam's introduction to the media in Montreal this morning and was very impressed with how both gentlemen at the table (Sam and Popp) easily and comfortably handled the announcement and responded to questions with well chosen words. They even managed to make the event a positive promotion of Montreal for being an "open city." Sam was careful not to comment on whether he felt he didn't get a fair chance in the NFL and, with his words, kept that NFL door open for his future. He also said "I knew for a long time that I was gay and that didn't stop me from playing football." He's far from being the first gay player in the CFL. The main interest in him, to this point, by the media is that he is the first to be openly so, having, for some reason, felt the need to announce his sexual orientation publicly some 15 months ago. I think the best guess, as to why, might be to precede it being announced by another source. If that was the case, I admire him for that decision, while also for his on-field accomplishments in college and in the 2014 NFL pre-season. Today, he was quite an impressive young man. I hope, but doubt, the media can now move on, as he has, from the now getting very old news about Michael Sam.

His story is so much bigger than his sexual preference. This is a guy who lived in a car as a kid, who's two brothers were shot dead and bounced around living at teammates houses growing up. I wish him the best of luck, will be very difficult to live up to the expecations Popp has put on him and the constant demands imposed on him by the gay community and media.

Has Michael Sam bailed on the Als?

While there has been no announcement from the team, a Montreal radio broadcaster bumped into Sam at Trudeau airport Friday afternoon, tweeting that the first openly gay player to be drafted by an NFL team was headed home to Texas because of personal reasons.

“Just bumped into (Sam) at Trudeau. Headed home for personal reasons. Only small Cotton Bowl bag with him,? TSN 690’s Rick Moffat tweeted. “Seemed rushed, mind elsewhere when I introduced myself. Don’t think he had enough luggage with him to be bailing or bugging out.?

With all due respect for Michael Sam, the nature of this decision will remain confidential.

The Montreal Alouettes fully respect Michael Sam’s decision and rally around him to offer him all time and support needed. The team has left the door open and Michael is welcome to come back whenever he feels ready.

The organization will have no further comment on this matter at this time.[/b]

Do you think this is just to avoid the Circus of he is cut from the team???

That's too bad, I was hoping to watch him against Ottawa tonight. Is that the last we see of him?

With all due respect for Michael Sam, the nature of this decision will remain confidential.

The Montreal Alouettes fully respect Michael Sam’s decision and rally around him to offer him all time and support needed. The team has left the door open and Michael is welcome to come back whenever he feels ready.

The organization will have no further comment on this matter at this time.[/b]

Do you think this is just to avoid the Circus of he is cut from the team???

According to what I heard on TSN, he was not as athletic as they had hoped and had not looked as impressive in camp.

One of the panelists thought that Sam would not be returning to Montreal any time soon.

There has been a lot of attention and hoopla for a player who was a 7th round NFL draftee. I know the other reason, but that should have nothing to do with his abilities or inabilities on the football field.

Maybe Sam was anticipating getting cut. Perhaps, even the coaching staff hinted this to him earlier in the week, so as to save him his pride and the media circus when the anticipated departure would come.

Even though, publicly, Popp said he would welcome Michael Sam back if he decided to return, I'm not so sure the coaching staff would want the distractions.

I watched that interview with Didier as well. It was mentioned that he was having a bad camp, he ran a 4.9 40, he wasn't explosive on his rushes, he was failing miserably during the one-on-ones, etc. Didier (I cannot remember his last name, but I'm pretty sure he's the Al's beat reporter) feels that Sam didn't have an appreciation of the skill level of the CFL players and it "hit him in the face". Milt Stegall mentioned that he had the same attitude when he first started out up here too; and he quickly learned to have an appreciation for the talent across the league.

If Michael Sam returns to the Als TC and continues to try out for the team, that would be the best for everyone involved. If he's quitting on the team because he believes he's about to be cut, that says a LOT about his personal character. If (and it's a VERY big if) he left the team because of harassment, then the Alouettes could find themselves in serious trouble.

I hope this blows over like a f@*t in a tornado, because it will either be a) yet another great American College football player that thinks that he will be a CFL superstar and fail miserably, b) a guy that redeems himself and learns some humility, eventually becoming an asset to the team, or c) he gets cut because he's just not a very good football player.