Happy Birthday Ang! The epitome of a TiCat! :rockin: 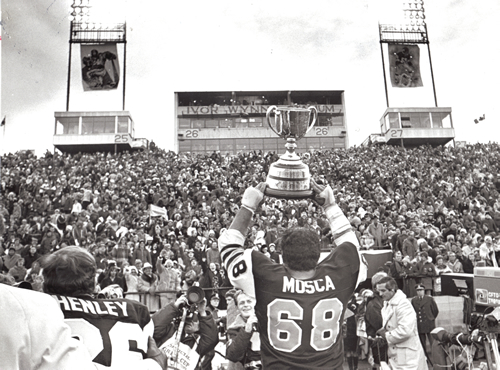 Happy 80th, Ange! One of my favourite Tiger-Cats of all time, and a great story-teller every year at the St. Anthony's Grey Cup Stag. One of the best guys ever to adopt Hamilton as his home. Stay well, Ange, and we hope to see you many more times. I'll never forget the 1972 Grey Cup, with the great moment when Ange hoisted the Cup in triumph.

Happy Birthday, Angelo! And many thanks for all the great Ticat memories. Have a terrific celebration.

Happy Birthday, Angelo! And many thanks for all the great Ticat memories. Have a terrific celebration.

Ditto that! And here's to many more years

My tribute to Mr. Mosca

My tribute to Mr. Mosca

Ang was a big part of my life growing up.

My mom was best friends with his daughter Jolene.

He was at every card show my hockey team held, was part of all our family weddings, and was fortunate to attend his daughters wedding at his estate on the Niagara River. Many (many) bikers attended that friendly function.

Ang is a personal hero of mine.

Strange thing was, I never became a Ticats fan until into my late 20's.

He was just always around, and never truly apprecaited his contributions to the city and the team until much later in my life.

I need to dig out a picture of me sitting on Ang's lap when I was 2 years old or so....He was in his ticats jersey, and I was in one as well.