I have watched Montreal beat Calgary and Toronto in Montreal.
I noticed their fans are incredibly loud when they arecon defence and it really rattles the opposition and makes calling audibles almost impossible. So let’s speread the word to all those Ticats attending the eastern final in Hamilton to bring noise makers like cow bells , those long blow horns, etc and your voices and stomping feet to make the environment loud and hostile when Montreal has the ball. let’s be the loudest in the CFL. If ever fan brings a noise maker can you imagine how loud that would be. of course being silent when we have the ball and cheer after the play.

To Orlondo and Mark Washington and the rest of the defensive coaches:
Montreal will win at home vs EDM and come to Hamilton to face us in the Eastern Final.

Montreal has shown that thay have a great running game. RB Stanback had a field day running against us last timecwe played then. He ran against our not so strong run defence side the strong side…This includes Howsare, Rico Murray, Frankie Williams, Tuggle and Leonard.

We need to game plan to prepare to stop Stanback running to the strong side. My suggestion is to have Tuggle follow Stanback everywhere.
Also, Montreal dresses two excellent import running backs including capable starter in Jeremiah Johnson who will pose a threat as his legs will be fresh for his 5 or so carries.

Vernon Adams has shown that he can run very well on quarterback draw or scrambling. In the Eastern Final he will run alot and won’t slide.

In Summary , we need to start thinking about Montreal’s run game and how to stop them .

Montreal and Stanback know they have had great success running against our strong side and we have time to figure out how to cimbat this. One option could be bringing in Shorthil and take out Adeleke and line him up on the strong side between Rico and Tuggle on probable running plays such as 2knd down and 5 or less.

Another strategy could be to have Adeleke move up towards the strong side ro provide an extra body on probable running downs like 1rst and ten or 2knd and 5 or less.

If we can stop Montreal’s 3 headed run game then we should win as their receivers are average.

Woah!! Don’t get to far ahead of yourself. The Eastern Final is almost a month away. Maybe concern yourself why Justin Tuggle is still starting at middle linebacker!!!

I think we had some grouches on this board who suggested noise makers and cow bells disrupted their ability to enjoy the game.

believe it or not.

Justin Tuggle had a good game today despite his missed assignment on the blocked punt.
Had Chris Frey not got injured then Frey would have been given a shot starting at MLB.
Tuggle has imptoved in the last 3 weeks or so but he is not in the class of Soli, Bighill, Dean, Awe, Muamba ,Ex stamp Singleton or Greenwood , or Bear Woods .
He had a really good blitz today getting to the QB affecting his throw. He made a few good tackles today as well . He is not a big play guy or big hitter or one to get many sacks or cause turnovers and doesn’t intercept the ball much.
On the plus side he is improving and tall and athletic and runs well and is a decent tackler.
We can’afford to have all-stars at every position but I could see him getting beat out next year by Frey or another challenger like an NFL castoff, CFL free agent or rookie out of an American Universoty.

Choosing this old thread to post this link. It’s to a very LONG article on Khari Jones but, for anyone like me who has the time and interest in anything CFL, I recommend it as a good read. And, a chance to learn more about a coach, and his team, who we may be facing in 10 days, might increase the chances that you’ll take the time, when you have time, to add it to your playoff reading list. 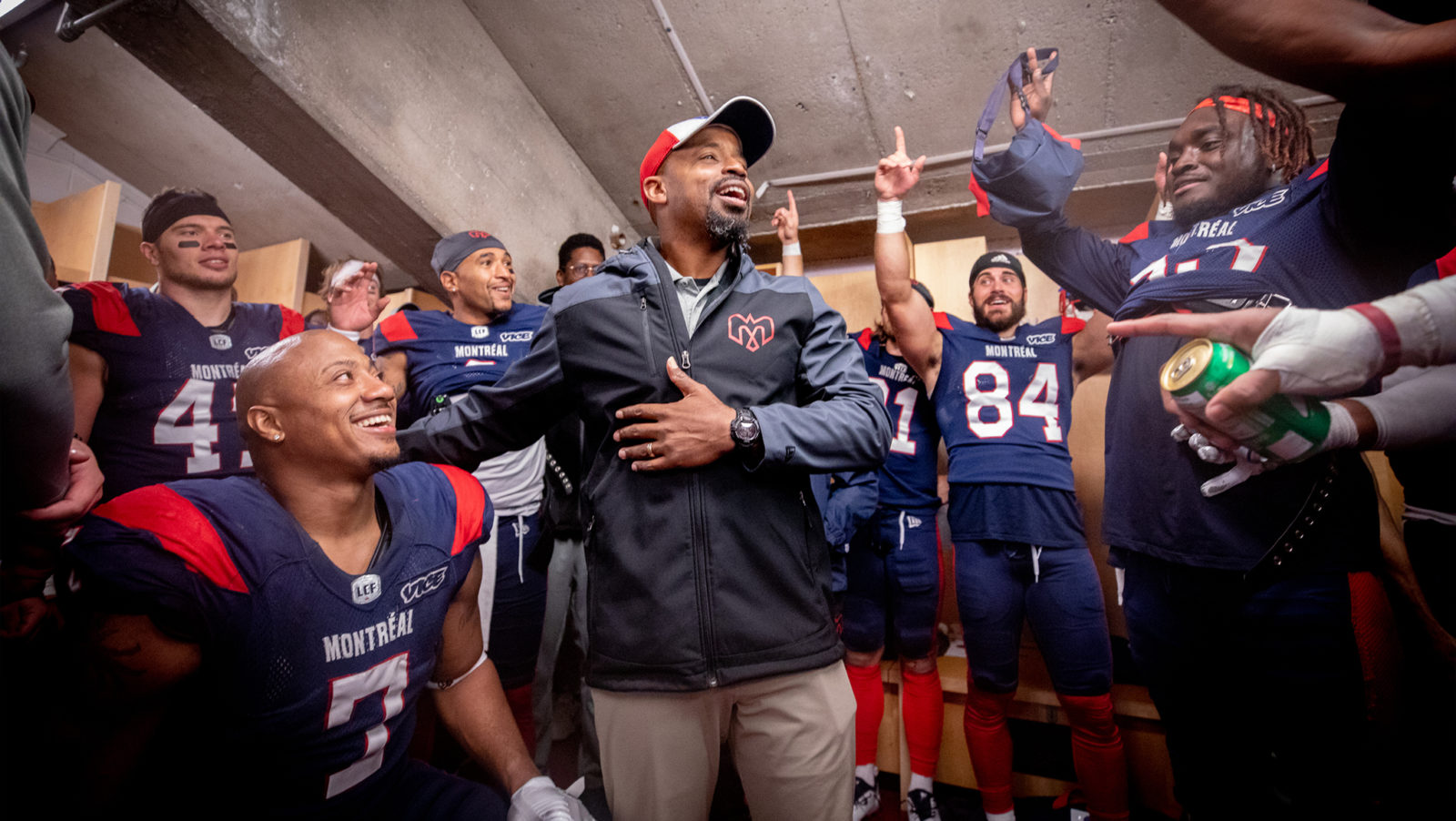 ix days. It could have been the most pronounced strike against the 2019 Montreal Alouettes, the beginning of the end of another write off of a season. The Als had wrapped up their training camp and were about to name their 48-man roster when they...