What a Sunday morning of soccer. The North London Derby between Arsenal and Tottenham at the Emirates was a sensational 90 minutes of high energy thrilling soccer with Arsenal showing they are back under their new manager - winning 4 - 2 in an intense thriller that had the Emirates Stadium rocking.

Then to follow that up with the Merseyside Derby between Liverpool and Everton that had this incredible ending. Unbelievable! 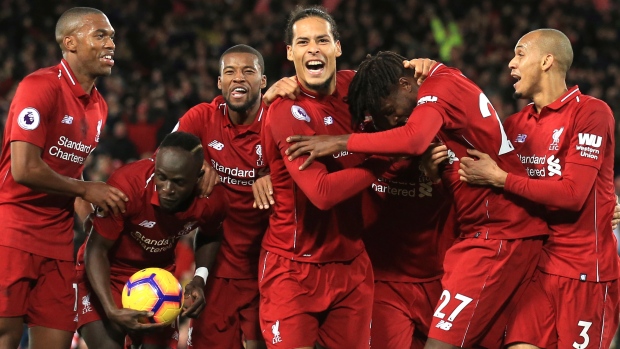 Divock Origi scored a bizarre winner in the sixth minute of stoppage time as Liverpool beat Everton 1-0 in dramatic fashion on Sunday to maintain its 19-year unbeaten record over its Merseyside rival at Anfield.

Sunday mornings just don’t get any better than this! (for me anyways)

These were the ‘Sweet Caroline’ scenes a couple of minutes after the end of the game in the Emirates after Arsenal’s big win today. If only Cats fans were half this excited after a big win instead of being in a race to theparking lot before the end of a game regardless of the score.

Ironically even though the Arsenal game was on Sportsnet - the great crowd scenes in terms of TV coverage only showed up on TSN. Sportsnet within seconds of the final whistle of the Tottenham - Arsenal game broke for commercials. NBCSN stayed with the great insane crowd celebration scenes in the stadium for several minutes - and because the next game was TSN picking up NBCSN’s feed of the Liverpool - Everton game - the TSN coverage of that game started with three or four minutes of great scenes inside the Emirates - something totally missed by Sportsnet even though it was their game. They went to commercials and then their own in studio talking heads totally missing out on these great post game Arsenal crowd celebration scenes.

This happens a lot with Canadian Premier league coverage which is why I much prefer the NBC/NBCSN coverage because they tend to stay with the live feed from inside the stadium instead of seemingly being in a race to get to commercials after the final whistle. Some of the post game sounds and sights are really cool to see as a sports fans.

And as you may notice in that Youtube video the rainbow flag Premier League messaging on the electronic boards surrounding the field. Every game all weekend carried signage like that and every team’s captain wore rainbow flag captain’s armbands - which is great for a league watched globally including some really homophobic places. Must be meaningful to see that for some closeted gay kids in those places. Well done Premier League.