Lewis on Als loss: 'This one hurts for all of us'

TORONTO — Despite an incredible turnaround after a difficult start to the year, the clock has struck midnight on the 2022 season for the Montreal Alouettes.

If you have any interest in assessing Harris' performance in an objective manner, you would have to conclude that Harris played an outstanding game, He protected the football and ended up with 362 yards in passing with no interceptions and no fumbles (on his part). As much as the defence beat Hamilton last week, unfortunately, the defence was unable to slow down Toronto's offence at important junctures, particularly during those crucial possessions in the 4th quarter. We just were not able to put enough pressure on Macleod Bethel-Thompson. The Als got themselves in a hole, very early in the game (just like Hamilton did last week) and it was a battle to come back. Harris and the offence played well but just fell short when they had no wiggle room left. It was a great game and hats off to the Argos for making a few more plays than the Als to punch their ticket to the Grey Cup game next weekend.

Not sure what game you might have been watching.
When your d can not make a stop, hard to pin it on Harris.

Harris and the offense posted 27 points and would have had more if our D had been able to make any kind of stop. This one isn't on Harris.

Perhaps Geno Lewis can win this years MOP-Most Outstanding Player award as consolation. My old saying is "Winning isn't everything, Wanting to is" 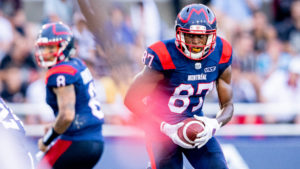