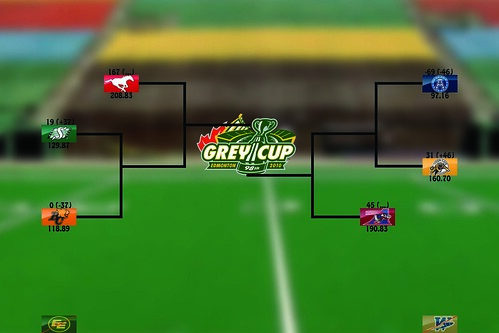 So this is how the CFL 2010 Playoffs look right now. Edmonton and Winnipeg are both eliminated, they're at the bottom of the image crossed out. Teams playing in the Western Division are on the left side, teams playing in the Eastern Division are on the right side. In the Western Division Home field advantage is given to team above in the picture. Thus Saskatchewan is hosting B.C. and whoever wins there will be hosted by Calgary. In the Eastern Division this is reversed (for symmetry!). Thus Hamilton hosts Toronto and the winner from that game will be hosted by Montreal.

Above each team in the playoffs are two numbers. The first number is how the team fared throughout the season in terms of total points "Scored For" in comparison to total points "Scored Against". In the case of Saskatchewan they scored 502 points over the course of this season and had 483 points scored against them, thus 19. The second number (in brackets) is how each team fared against who they are currently playing against. Again, as an example, Hamilton outscored Toronto 74 to 28 and so Hamilton has (+46) while Toronto has (-46). Below each team is the cumulative season performance number I've been using in my power rankings to give you another idea of how each team might potentially do against each other. If you want to know how each team did over the course of this season, you can go here ([url]http://rixelstudios.livejournal.com/tag/'10%20power%20rankings[/url]) for the current season.

Finally, based on my cumulative rankings, here're a couple percentiles for you to mull over:

The Likelihood of each Grey Cup matchup

Hope this proved to be entertaining!

if games were based on Statistics, the Stampeders are already Grey Cup champions.

but there's so much more involved than just stats.

I believe momentum has a lot to play with here too.

cflisthebest, I agree entirely. stats are not the be all and end all of any sport least of all football and, as far as playoffs go, each team only has one chance to get it right. One or two big (or small) mistakes at wrong time and a team that's better on paper could easily be eliminated. This is one of the reasons I didn't predict that Grey Cup but only up to the Grey Cup because if a team is going to make it there you know they're going to pull out all the stops they can to try and run the other team into the ground and will (likely) not look anything like the team they were in the regular season.

However, just because I agree that stats aren't everything doesn't mean that I'm going to toss out everything that has been demonstrated by each team up to this point. It's been said in other threads that while such matchups like Saskatchewan and Hamilton in the Grey Cup would be awesome to see, this isn't really expected in comparison to a 2008 rematch between Calgary and Montreal. Not because Calgary and Montreal are going to win (I'm hoping they don't, personally (GO RIDERS! :thup: )) but because they've obviously been doing enough right this season to get strangleholds on first place in each of their divisions. So all I've done here is try to put percentages next to each team so if the games were played in a vacuum (which they aren't, I know :roll:

) you could get an idea of what the chances are for you seeing your team in the Grey Cup.

Oh, and because I love giving fodder to you to prove how wrong I am (no sarcasm, honest):

Plus, as if you needed anymore reason to doubt my current batting record of .333 in the Grey Cup, I finished a pathetic #65 with a 43% average in the VGCC. Random number generators did better then me this year in the VGCC! :rockin:

So, in conclusion, I'm not selling myself as right but just as someone to amuse everyone for a couple minutes with pictures and numbers

@Hammer, Montreal is definetely the favourites for the Grey Cup but I can easily see Hamilton taking them down. We can still place good hope on that '89 rematch!

I'm impressed with the stats and love the pictures. Too bad some of these are not options to add to our responses. The picture in Aug of DD throwing the ball is cool.

Two teams have been eliminated and we're down to Four!

For those curious as to why the numbers for Saskatchewan and Toronto have changed, this is largely to reflect each teams theoretical gained momentum. Still, as demonstrated by the loss of Hamilton, having the higher number doesn't guarantee you a win just that you're on paper more likely to win. Unfortunately for the Ti-cats on paper wasn't good enough.

Anyweather, let's take a look at how things have shaped up thus far and see the updated percentages based on the new numbers!

The Likelihood of each Grey Cup matchup