Leo Lewis has passed away

[i]Leo Lewis, who played running back with the Winnipeg Blue Bombers during the 1950s and '60s, has died. He was 80 years old.

Lewis died peacefully at his home Friday in Missouri, his sons confirmed to CBC News.

Known as the "Lincoln Locomotive," Lewis played college football with Lincoln University in Missouri before joining the Bombers in 1955.

During his 11-year CFL career, Lewis rushed for 8,861 yards and was part of four Grey Cup-winning Bombers teams.

After retiring from the CFL, Lewis returned to Lincoln University to teach and coach for more than than 30 years, according to his entry on the Manitoba Sports Hall of Fame's website.

Lewis was inducted into the Canadian Football Hall of Fame in 1973. He was named to the Winnipeg Football Club's Hall of Fame when it was established in 1984.

In 2005, he was inducted to the Manitoba Sports Hall of Fame and named one of the top 20 all-time Blue Bombers.[/i] 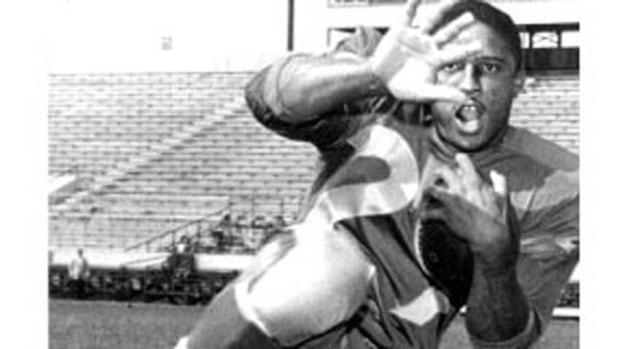 Leo Lewis, who played with the Winnipeg Blue Bombers when it won the Grey Cup four times in the 1950s and '60s, has died. He was 80 years old.

RIP Leo Lewis. Never saw him play but I heard and read stories. It would be good if the current crop of bombers were educated on Mr Lewis on the bus ride to Regina. Maybe it'd instill a bit more pride in the heritage of the uniform they wear.

Bud Grant called him the best player he ever coached - that's good enough for me. Rest in peace Leo.

.....What a sensation to watch was Leo Lewis....On many Bomber Grey Cup winning teams...Tremendous back, I can still see him deking all of the opposition defenders out of their shorts and clutching at air as he made his way to the end zone... Bud Grant said at one time he could have easily played in the nfl ,if he had chosen to do so...He just loved to play for the Bombers......had it all....Condolences to his family and friends..

I was 9 years old and faintly remember Leo Lewis play at McMahon 1965 in Calgary. I remember more moments of Leo Lewis in the 1965 Grey Cup game won by Hamilton 22-16 over Winnipeg...I also say 1965 was the best Ti-Cat team ever. Coach Bud Grant had very good Blue Bomber teams as well that won Lord Grey's Cup twice in the early 60's.
Best wishes to Leo Lewis and family.

Leo Lewis was the most exciting football player I ever watched. He is responsible for my interest in football and likely my interest in sports. What a great player and individual he was. The CFL, and in particular the Bombers, could use another player like him.

Thanks for the memories....