Is Masoli for real? TSN has proclaimed him a 'franchise player'. Whatever. NICE win. Balance to the offence. Just stop the long passes on 2nd and short!

Not sure I would agree with the "franchise player" designation at this point, but his completion percentage went up drastically & we didn't have to scrape out a win. If he does this more than once, that tag might be appropriate.

I think we should also remind ourselves that the Bombers were without Nichols in the second half. I think if he was in there, we would be tearing our hair out in frustration right now...

This team is a joy to watch now I love this run and Shoot
That Jones has brought in even Fantuz said that he is learning totally new things it's innovative and love to watch a scrambling QB getting it done. Face it folks after tonight's performance Zack is gone and Yes in my opinion you will see the J and J show next year that is in Johnny Football coming to town.

We certainly took advantage of playing against their backup QB - after not doing so against Sask, and against BC in our first game against them. (Although Lulay is hardly a novice.)

It almost feels bad that we are the team responsible for so many QB injuries this year. Jennings, Harris, and now Nichols. I'd say I feel sorry for those other teams, but I doubt they felt sorry for us when it went the other way.

Totally agree, since KA left the field, we can enjoy some offence, the quick kick was to die for!!

Leave everyone alone and lets see Calgary doing some squirming for next week!!!

Agree with all of the above. Might have managed to eke out a win. if Nichols had still been in the game but it did make it easier. Davis doesn't have the same accuracy for sure.

Not ready to assign "franchise QB" to Masoli yet either although he did have over 300 yards by the end of the 3rd quarter and managed to overcome the series of 2 and outs in the third. That long TD drive in the fourth was impressive and put much needed points on the board.

OK, so we won, again.
But, just think about how much better it could have been if we had a younger coach, started Collaros, had taller receivers, hadn't traded Chick and Gable, and had the QB right up behind the line on short yardage plays. I hope Jeremiah likes a little country music and is pumpin' Toby Keith in his ears right now -- "How do you like me, now? Now that I'm on my way!...."

Firstly, outside of the Edmonton game last year this has to be Masoli's best game of his career. I'm not prepared to call him a "franchise QB" but this was a huge game for him...

The mix of run and pass is certainly working and it is opening up the passing game downfield.

The improvement in the secondary over the last month is exponential and the relatively consistent pressure from the front four is causing bad passes from opposing QB'S...LOVE IT!!!I'm becoming a huge fan of Nakita Whitlock!!!

Now,Castillo going down with what appears to be a blown ACL.... This is the 3rd serious knee injury on this team in the last 2 years due to the Plastigrass*...Like I said on the game thread,I guess ownership in this league has done a cost benefit analysis and decided that cheap plastic turf outweighs destroyed knee's...

Sadly, I think this was the last game we will Zach Collaros in a Tiger-Cat uniform...

Some weird stats from the game:

Now,Castillo going down with what appears to be a blown ACL.... This is the 3rd serious knee injury on this team in the last 2 years due to the Plastigrass*...Like I said on the game thread,I guess ownership in this league has done a cost benefit analysis and decided that cheap plastic turf outweighs destroyed knee's...

I'm not sure that the owners decide on the playing surface, as opposed to the city or whichever entity owns the stadium.

But this is certainly something that you hear about a heck of a lot more in the past few years than in decades past. There's gotta be something to it. I'd like to see an enterprising journalist look into it, but they are all exclusively focused on concussions when they want to write about football injuries.

...... Sadly.i think this was the last game we will Zach Collaros in a Tiger-Cat uniform...

You could be right. However, I don't see, what some others do, that he'll be gone from here, by the coming trade deadline. What team is going to pick up his contract and what would they give up to do so? Zach is signed for next year. Unfortunately Jeremiah is not and is making himself more attractive each game to get good offers elsewhere for '18. If there are no big, off-season, payments called for in Collaros' contract, I say it's best to just leave things as they are, for now. Then, wheel and deal, in the off-season when it's known, but maybe, and hopefully, not pubicized, where things stand with the two JM's. A deal, then, might be made then with Zach agreeing to accept a new contract with another team to get it done.

Austin's refusal to run the ball was the single most reason why the Cats have sucked.
OLmen must be allowed to hit back.

Austin's refusal to run the ball was the single most reason why the Cats have sucked.
OLmen must be allowed to hit back.

It's a completely different system.
Austin didn't refuse to run the ball. He relied heavy on the pass.
His system also got him to 3 grey cups in his first 3 years as a head coach.
One day when our double screen play offence doesn't work and our qb gets hurt for running too much read option... you're gonna be asking why we didn't throw more down the field. Cause we certainly don't do that now.

Harsh I know.
I was sitting here thinking tonight... what if this scrappy offence with Read option and a ton of screens. Running the ball and barely at all throwing over the middle is enough to win a Grey Cup with a great defence?

If so... the Qb isn't the focal point but is expected to do a job and not turn the ball over. Run yourself and make decisions in the read option. He's not being asked to make tough throws.

Why not take Zachs money and dump it all into the defence. Let coach Jones do his magic with this "no name" offense.... And build a great defence.

Can't say it's been done lately in the CFL.

Masoli #'s for the game 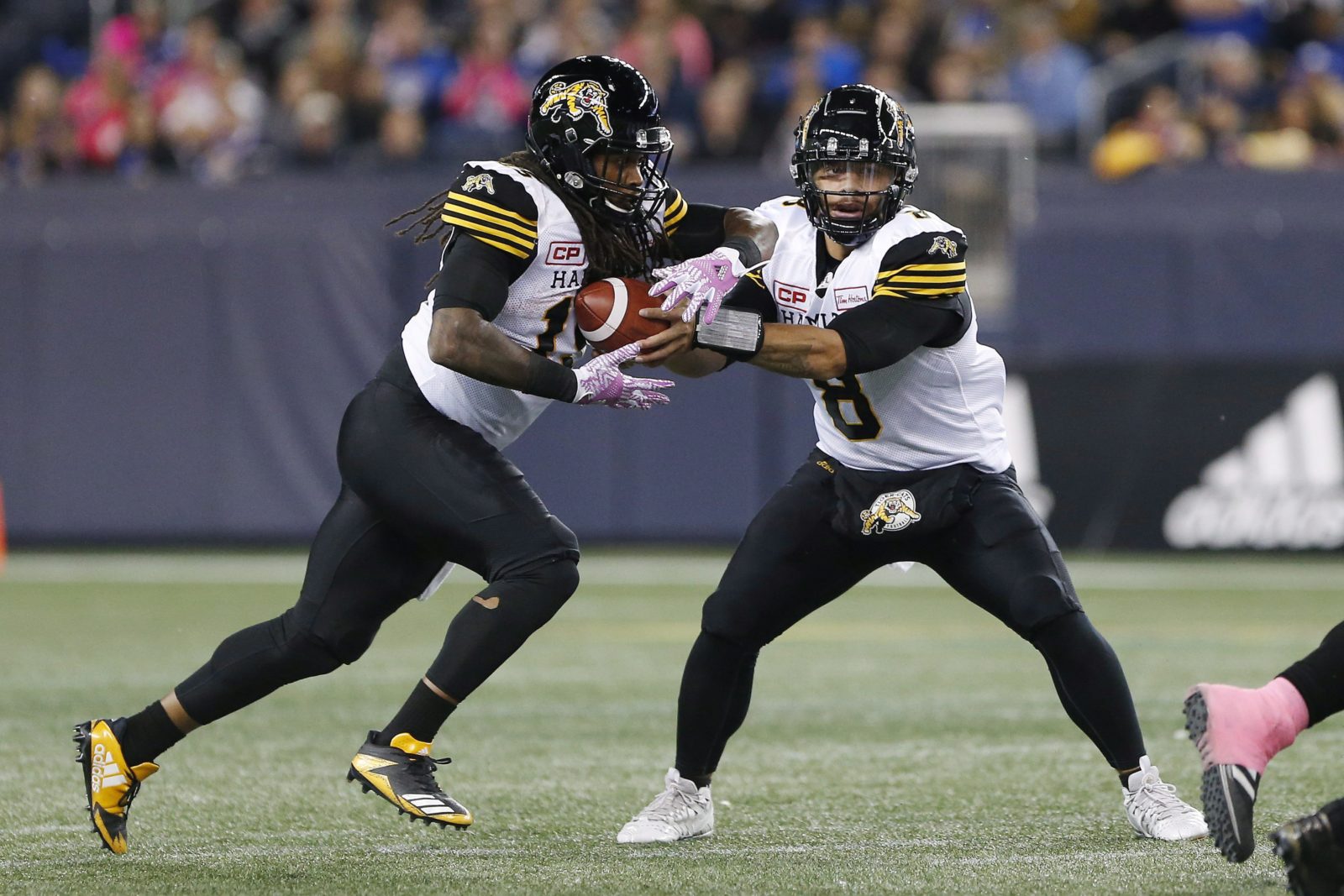 Crash... you may have something. The reason Joe Zuger isn't in the hall is because he never was a stat guy but instead managed a good enough offense with a stellar D.

It's simply incredible & absolutely unimaginable that the TiCats won:

A) Without Jon Chick or any rush Defensive Ends of any quality.
B) With Courtney Stephen on the field because we all know he's an inferior player & only has a job because of his passport.
C) Because they cut Will Hill who was a baller and where is he now exactly?
D) Because Montford, Covington, Zambiasi, Hitchcock et al; aren't playing now.
E) Because Rich Stubler is not the Defensive Coordinator
F) Because I can't create a concise post without repeating myself numerous times with grammar & spelling that makes it almost incomprehensible to read.
G) G Stands for ... you all know what's to come. Gerbear. Garbage.