[b]HAMILTON—On the drive to Joe Zuger’s house on the west mountain, you pass the Canadian Football Hall of Fame.
You won’t find any sign of the Tiger-Cat great’s old No. 9 jersey inside the shrine, though.
Zuger, who turned 75 in February, was a defensive back, punter and quarterback for the Ticats in the 1960s, leading them to three Grey Cup championships in five appearances. He wasn’t the best at any one position, but he was among the best at several and his versatility is perhaps unmatched in league history.
He might have been penalized for being too well-rounded as a player.
“It’s a shame he’s not in the hall of fame,? David Braley, owner of the Toronto Argonauts and B.C. Lions and a hall inductee, said in a telephone interview. “I can’t figure it out.?
There have been other notable snubs over the years — leading to talk of adding a contributors class to help correct that — but Zuger is perhaps the most glaring.

Arizona State University inducted him into its sports hall of fame years ago. So did the Pennsylvania Sports Hall of Fame, Western chapter. Yet Zuger played and accomplished more in Canada than in the U.S. The oversight used to nag at him.
“You think about it, but it passes,? Zuger says. “Then a lot of times when (a player induction) happens it’s too late, and you don’t give a s---.?
Zuger has many supporters. Mark DeNobile — non-voting executive director of the Canadian Football Hall of Fame — says he thinks he should be in. So do Garney Henley, a hall of famer himself, and Frank Cosentino — Zuger’s former teammate, Vanier Cup-winning coach, teacher and author.
Zuger played in an era when Russ Jackson and Bernie Faloney swept up most of the individual honours, although Zuger was the 1967 Grey Cup MVP.
“You have to be a division all-star, a CFL all-star, and I was never any of them,? Zuger says.
He did, however, accomplish something that no other pro quarterback ever has: in his first CFL start on Oct. 15, 1962, with his parents looking on, Zuger threw eight TD passes — a potential ninth was wiped out by a holding penalty. Hamilton crushed Saskatchewan 67-21.
“I said, ‘Don’t expect this from me all the time because it happens only once in a lifetime,’ ? Zuger jokes.
Henley, 79, who now lives with his wife in the small farming community of Huron, S.D., remembers that game well.
“(Zuger) could do anything that Russ Jackson did,? Henley, who scored four touchdowns on that record-breaking day, said by phone.
Zuger started and won his next three starts at QB to wrap up the regular season, throwing a combined five TD passes in those games, according to the CFL’s head statistician, Steve Daniel.
As a punter, he had the CFL’s third-best season ever with a 48.5-yard average in 1971. His career average of 45.5 ranks fifth.
Zuger was also a safety in 1962-63, racking up nine interceptions before moving solely to offence.
After retiring as a player, he served as the club’s general manager for 10 seasons, winning another Grey Cup in 1986.
At six-foot-three and a still lean 210 pounds, he looks like he could still sling a football 50 yards. His health, however, has been a concern.
His face — framed by white, wispy hair — is full of red blotches. He has diabetes, and wears a pacemaker after heart bypass surgery a few years ago. He may have a beer or two over the course of a month, maybe a Bloody Mary, but says he doesn’t even drink wine anymore. He watches what he eats.
Zuger and wife Ellie — who first met as Grade 9 students in Homestead, Pa., near Pittsburgh — are opposites. She’s always on the move; he stays home. He likes the solitude. He’s been a painter since childhood and is putting the finishing touches on his latest work: a red-tailed hawk, for son Joe on his 50th birthday. The Zugers also have two daughters — Beth, 51, and Amy, 45 — and nine grandchildren.
Henley says he would do anything, including a letter of endorsement, to get Zuger his due in the Canadian football shrine. One day, maybe that connection will pay off like it did on the field in 1962.[/b]

Seriously, he belongs. I believe MadJack was at that record-breaking first game. Our other brother used to deliver Joe's newspapers and always said what a great guy he was. :thup:

Thanks for the Joe Zuger story. Mr Cool.
I would never have recognized him from the photo. How come everyone else changes when they are older except me?

He needs to be in the Canadian Football Hall of Fame. And very soon.

Joe was the best into the wind punter on either side of the border. I miss the quick kicks from the short punt formation(shotgun).Joe and Dave Mann are the best punters I ever saw. I was sitting in the south stands for the record breaking game against Lancaster and the Green Riders. Joe belongs in the Hall of Fame. As a young man, I recall linebacker Herb Paterra tearing up his knee in a home game. The next day in the ICU at General Hospital, who shows up to visit Herb, Joe Zuger and Angelo Mosca. Joe is a class act all the way!

bobo, without going into the minutiae of the nomination process, there is a line in the article that seems to sum it up:

“You have to be a division all-star, a CFL all-star, and I was never any of them,?

He was great in a number of categories, but not extraordinary enough in any single category that he could be shoe-horned into. Don't get me wrong - I firmly believe he should be in the Hall (just as I firmly believe Paul Henderson should be in the Hockey Hall of Fame for scoring the 3 GWGs in the Summit Series, NOT for his career for the Make me Laughs), but under the CURRENT RULES, he doesn't qualify. Time to get those rules changed... Bob?

A Collage of the history and career of Joe Zuger.....Enjoy !!!

Celebrating one of his three Cup victories

A young Joe Zuger in his rookie season in "62"

On the cover of the 1968 Grey Cup program 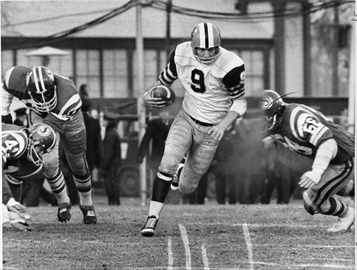 Being honoured at Ivor Wynne as one of the All time Greats.....THANKS JOE for all the great memories

Thanks for posting the Joe Zuger story.
I have often wondered how Mr. Zuger is doing.
I don't put much thought into the hall of fame inductees,but,the facy Joe Zuger is snubbed by the Hall of Fame really is a shame,shame on them,what a joke!
Joe Zuger did it all for the Hamilton Ti-Cats and did it well.
'
For his excellent punting alone he deserves to be a hall of famer!
Great QB and GM of the Cats,come on Hall of Fame ,get your head outa your "..."

Good time to ask why the HTC continually snub multiple All-star and multi purpose Grey Cup champion Howard Fields from any honours only to put Les Browne on the wall of Honour ?

Here I always thought getting into the HOF was waaaay too easy.. Like 4 or 5 players ayear from a 9 team league?
Sadly, the most shameful thing is the Hall itself. I have never been so depressed in my life as I was when I visited the HOF in 2011...
Boxes full of old tapes holding open doors...Broken displays with 1980s tecnonolgy... Busks of the greats sittining on cheap miniture golfing green carpet.. The place is out right pathetic and I would discourage everyone from going.. If you were in Hamilton and was handed a free ticket, I would still suggest that you DO NOT GO!!!
The place is that depressing.

Good time to ask why the HTC continually snub multiple All-star and multi purpose Grey Cup champion Howard Fields from any honours only to put Les Browne on the wall of Honour ?

Perhaps this deserves it's own thread rather than hi-jacking Joe Zuger's CFHoF thread. I'm not saying it shouldn't be discussed, only just not here.