chch sports reports that Jesse Lumsden will announce his retirement tommorrow and just concentrate on the bobsled.
Good Luck Jesse in your new sport

I wish Jesse nothing but the best. It's a shame what injuries have done to him but you can't deny his talent nor can you question his determination to get back on the field. Thank you Jesse for several great seasons in Hamilton at both levels of football.

Jesse Lumsden Tribute
Thanks for all the memories!

A very special football talent to be sure. Given the ball he was a threat to break it and score at any given time. One of the very few players who got me excited every time he touched the ball.

Hope he experiences good health for the rest of his life. 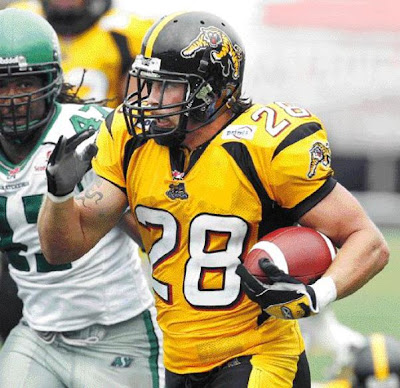 I will Miss Jess on Field
He was great to watch from High School at Nelson to Mac the to the CFL.
He is one of nice guy I have ever Met
I Proud to call him a Friend and I Know He'll win a Gold Medal
One day as a Member of our Canadian bobsled team

All the best. Next.

Too bad, if he could ever stay injury free he would have likley broken some records. All the best!

A very special football talent to be sure. Given the ball he was a threat to break it and score at any given time. One of the very few players who got me excited every time he touched the ball.

Hope he experiences good health for the rest of his life.

O to dream of what might of been, thanks for the memories, good luck Jesse. :thup:

All kinds of talent.

I did not expect this. I'm sure he had to at least consider retirement with his injury history. But he did not seem to be the kind of individual who would quit, as we have seen him return before, after it looked he was finished. And I didn't expect this after he recently said this:

“I love football. I really do,? Lumsden said. “I’m really, really fortunate to have two sports in my life that I care about a lot and work really hard at. But football? Shoot, it gives me goosebumps still thinking about getting on the field.?

I would like to thank him for his contributions here. And with a 6.3-yard average per attempt on 291 carries, he accomplished much more than some said he would, as some said that at Mac he padded his numbers against incompetent OUA teams.

He was here from 2005-2008 when the team was the worst in the league. But he helped make those Ticat games more entertaining and I'm sure he put more fans in the IWS seats.

And here are a few of my favourite highlights from when he was here:

Three guesses as to why Jesse's retirement has been announced. Here is you first clue.

Lumsden to discuss future with Hufnagel May 11, 2011

to discuss his future in the Canadian Football League.

At this point, Lumsden is still on the roster, but with training camp approaching

...the Stamps would be able to release him and thus open up another roster spot.

I don't believe that, for a New York minute, a couple days after saying this...

to have two sports in my life that I care about a lot and work really hard at.

But football? Shoot, it gives me goosebumps still thinking about getting on the field.?

IMO, Calgary has just thrown water on his opportunity to return....for the time being.

Those who disagree will only prove me wrong if he signs retirement papers.

I like Jesse and it's going to be great to be able to cheer him on as part of the Canadian bobsled team.

I enjoyed watching him play, but truly believe that this decision (whether it was truly his decision or just the fact that nobody would sign him) is the best one for him. I actually worried every time he took to the field and did not want him to end up as a 50 year old man who couldn't walk or had no use of his arm.

Good luck to Jesse. He had nothing to prove to anyone and I'm glad he made this decision. He did some amazing things on the field and is a great guy.

I think it’s a wise decision for him to get out of football. Football was causing way too many injuries for his long term health. And teams would naturally be less and less likely over time to pay him significant money when they tended to get a few games at most out of him. It hasn’t been serving much purpose for him to try to remain in the game, with so little actual play to show for the time invested in it.

I’m glad he’s found another outlet for his competitive instincts and skills in bobsleigh.

He’s a talented athlete and I wish him well in sports and in his other endeavours.

All the best to Jessie in his new solo sport career. I will miss him on the field.

He was a fierce competitor on the football field and fought his back from some serious injuries.
I always hate to see football talent like his coming to an early end because of injuries.
Good luck to him in bobsledding. It will provide him with a great outlet for his courage and determination.
Thanks for the excitement on the football field Jesse! :thup:

I am pleased that so many have taken the time to wish Jesse well in his decision to pursue his athletic endeavours in bobsledding full-time. I believe that most Ticat fans can understand that this is an important choice he has made and one that is completely understandable.

No one can question any athlete's courage in getting between the white lines of THE most demanding of contact sports and pursuing his/her dream in it. So often the mind is willing, but the body can eventually give out and other directions have to be taken.

To be blunt, Jesse Lumsden the man is not made of glass. His efforts on the professional football stage, albeit brief when his injury history is considered, impressed many who can only marvel on what could have been. Canadian football history is richer for that.

I've been a strong supporter of Jesse Lumsden ever since his days with the McMaster Marauders. Even during all of those season-ending injuries, I would still support Jesse, despite all of the very negative naysayers out there that called for him to quit football. I kept remembering the drive and potential that he had (and likely still has). I'm sure that Jesse has done his father, Neil, and the rest of his family proud. I'm very saddened to hear that Jesse has decided to retire from football, but I will indeed continue to follow his career while he is participating in the bobsleigh competitions. He most certainly deserves our support. :thup:

Jesse Lumsden and Bobby Orr have suffered similar fates when you think about it...........one career shorter than the other but both cut way too short by the injury bug.
Oh, what could have been in both cases 8)