It's that time again. Tiger-Cats gameday is here again. And it is not just any gameday. It's a day that we knew would eventually come, but it's a day that not all of us necessarily looked forward to. It is the day that this Ticat team plays its last regular season game at Ivor Wynne Stadium. Many Ticat fans will be there at the game, but those who cannot make it to the game can discuss the game in this thread while the game is on. You can think of this thread as being like a virtual living room where fans discuss the game with each other. You can think of it as being like a virtual broadcast booth where what happens in the game is mentioned and commented on while it's happening. You can also think of it as being like Twitter but without the character limit. In any case, here we go.

WHY – To see if the Ticats can make it so they'll still have a chance of making the playoffs and make it so that what may be the last Ticat game at Ivor Wynne Stadium will be a Ticat win.

WHERE - The historic, venerable, Ivor Wynne Stadium in Hamilton, Ontario. And this may be the last time we will be able to say that a Ticat game will be held there.

Click here to view CFL.ca's live scoreboard for recent games. You can click the link to view this
game's scoreboard whenever it becomes available, which will likely be just after the opening kickoff.

Click here to view what Drew Edwards posts on Twitter. He'll almost certainly be tweeting useful information during the game.

Click here to read an article title "A Farewell to Ivor Wynne." I'm sure you'll find it well worth the time to read it all.

Click here to read some great one word descriptions of Ivor Wynne Stadium.

Well, after very many Ticat regular season games have been played at this stadium at 75 Balsam Avenue North in Hamilton, it is time for that last one to be played. It is a game that the Ticats need to win, and not just for sentimental reasons. Both the Ticats, and their opponents, the Winnipeg Blue Bombers, need this win in order to still have a chance of making the playoffs. And if the Ticats win this game, there is a chance that they will play one more game at this stadium. And if they lose, then the last Ticat game at Ivor Wynne Stadium will be a loss. It may seem as if I am making it seem like the fact that this is the final Ticat regular season game at IWS matters more than the fact that seasons are on the line today. But after many decades, during which many fans and players from a number of different eras and generations had come and gone through this stadium, this truly is a historic day. I am unable to put into words how significant it is. Fortunately, I'm sure that many Ticat fans can describe what this stadium is to them, and how significant this day is. In fact, some already have done just that.

There have been many memorable moments that have occurred at this building on 75 Balsam North. And now that all but the final pages of the final chapter of the story of this stadium have been written, those who are not able to be there for this last regular season game can join me here in documenting what happens during this final regular season game at that stadium. After all of the great and memorable moments that have happened at Ivor Wynne Stadium, we only ask for just a few more great moments in the history of that stadium. And if this will be the final Ticat game to be played at Ivor Wynne Stadium, then it will hopefully be yet another one of the games held there that we will enjoy looking back on.

And now, I only have one thing left to say, which I will say "more loudly" than usual, which of course. is...

Last week we had a soul crushing loss. So what new and inventive way are we going to lose this week?

My perference would be for "Winning by less the 40 points" but I don't think we're going to be so lucky...

I am pulling out every last bit of optimism I can muster.....and am predicting a win for us today.
The thought of losing our final game at IWS makes me shudder.

Great opening post BobYoungFan, let's hope we can pull this final game off with a win, and leave the old homestead in a blaze of glory.

Getting ready to go and find my rain gear but it's going to be great despite the rain, or maybe even better with the rain!

I wasn't even born or raised here in the city but I think I just might be shedding some tears today for the old girl.

Thanks for the thread BYF, you wrote a nice intro.

I have played, coached and watched many a game at Ivor Wynne and I am sad that I can’t be there for one final time. It is a stadium drenched in history. Tears have been shed and toasts have been raised, disappointment and sadness have gone along with excitement and jubilation but when it’s all said and done Ivor Wynne stadium has stood as a testament to the city and the Tiger Cats.

The Ti-Cats no longer control their own fate and they need a lot of help to make the playoffs, if they even deserve to. However, a win today is a must not only for the team but for the stadium as well. Civic/Ivor Wynne Stadium needs to be put to rest in proper fashion and that can only be accomplished with a win.

An Oski Wee Wee for Ivor Wynne Stadium, you will be missed.

Thanks for the compliments on how I started this thread. I wanted to do a good job in starting off the game thread for this game.

Those were some good segments on TSN. One was on Pigskin Pete, the other was Chris Schultz sharing his memories of this stadium

Pictures from in and around IWS: 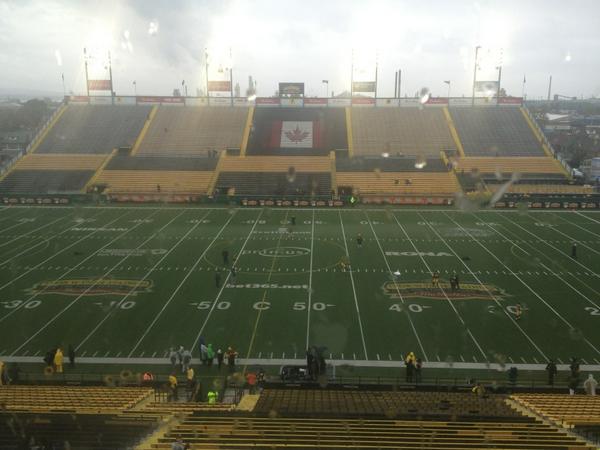 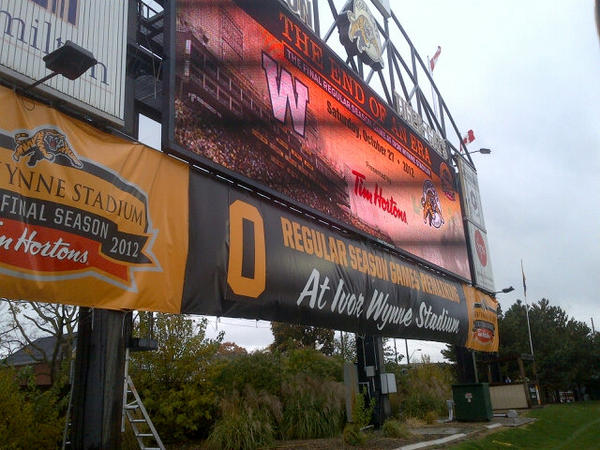 The beginning of the end is coming up. And perhaps that final Oskeeweewee chant as well.

Thanks BYF I get to watch todays game from the cozy confines of my shack in North Dakota! My last memory of Ivor Wynne was of the game on August 13, 2011, a close game with the argos, but a win nontheless. I did not make it to any games this year as I've worked almost nonstop this year, but at least my last momory of the place will be watching Justin Medlock hit a 50 yard fieldgoal, through the west uprights, and then running past the argos bench telling them to shove it! Then jamming onto Beachwood ave. after the game and partying with fellow Ticat Fans before piling into my limo with my family and heading home, to continue the party back to Cambridge, it was one of the happiest nights of my life!!

Oskie Wa Wa Ivor Wynne Stadium, you will be missed!

Lets go out with a bang!

#Ticats legend Angelo Mosca the last of the all-time team to be announced. He deserved one more standing ovation in the old barn. #CFL

Things to watch for:

Henry Burris needs three touchdown passes to record a 40 TD season, becoming only the sixth player in CFL history to hit that mark and the first Ticat... Chris Williams needs one touchdown to tie the team's single-season record for scores (15), currently held by Tony Champion and Ronald Williams... Dave Stala needs 22 receiving yards to reach 5,000 in his career... Avon Cobourne needs 50 yards to reach 5,000 for his career...

Thanks BobYoungFan for the intro I'm sitting here with the TV tuned into TSN by myself but not really alone because I know there are TIGER-CAT fans from across this country who are cheering along with me.Hell it's game time lets kick some ass!!!!!!

Game on! The final Ticat regular season game at IWS is on!

Alright, now make what could be the last game at IWS a good one!

Rather short punt, Williams returns it to our 45.

Now, let’s see if offence is inspired and can do well with precipitation coming down.

And thanks for the compliment, Al.

Looked like Williams tripped over the empty space he had. Still an ok return though.

Looked like Williams tripped over the empty space he had. Still an ok return though.

Seeing that open space on the replay, it looked like you might have had to update your signature if he did not slip or trip.

Sure hope you're right.

Johnson knocks down pass on 2nd and 5, we punt.

Well there is a hopeful sign, Buck is 0-2 passing to start...