What is the status of Andy Fantuz?

Surely we saved some coin with the departures of Chick, Gable, E Davis and Collaros, and from Laurent taking a bit of a haircut.

I haven't done the analysis, but it seems like every other team did more tinkering than we did. That includes the Grey Cup finalists and other teams that won 12+ games. The implication is that they felt they needed to get better, while we felt we are already good enough. Hence my opening question - are we really?

As people have pointed out, continuity is a positive in its own right. Those opening four or five games are sure going to tell us a lot.

Yes, I think most other teams saw more movement too, though I haven't done the math on all of them.

I guess it's a chicken and egg thing to some degree. Did they bring in more FAs because they wanted to change for the better, or did they need to bring them in to replace people they knew they were likely losing? Probably a mixture of both. Are they better off for the changes made, or are we by having greater continuity? Impossible to know at this point. But I doubt that all teams with more change than us got better by swapping FAs around.

We may well have saved some money with the changes we've seen since last year's opening roster. I wonder if any of that is still being earmarked for Manziel...

Prime is the only starting FA not re-signed, Maybe he doesn't fit into Coach Jones playbook?

Maybe Jones is thinking of actually having the FB position as a legimate ball carrier/short yardage threat. Or, in my dreams, a legimate short yardage receiver playing as a TE?

Good question by the OP. I don't think we will be any more competitive this coming season than we were since June Jones became HC last season.
The question I would also ask is...how much improved will the Blue Team and Ottawa be this season? I suspect we will have a lot of catching up to do.

I think we still have some cap space still to spend
Perhaps the TiCats are waiting for some players to be released for cap purposes from other teams.
Look at TOR last season, they acquired SJ Green, Bear Woods, Cleyon Laing, Cassius Vaughn, Marcus Ball,etc all acquired in May, June.
Of course this was because they had no front office until April, but it worked out for them.

What is the status of Andy Fantuz?

This has come up several times in various threads since both Fantuz and Aaron Crawford were registered, with the league, as "Retired" prior to the final game of the season. For the previous game, Andy was on the 1-Game Injured List, after playing 3 games, and Crawford was active, as he had been all season. He finished that game, despite having suffered a torn ACL during it. Nothing has changed, since, regarding their status. A former RedBlack, Hamiltonian Kevin Malcolm, was signed to long-snap in Game 18 and remains on the roster.

Here is a pretty good write up that says we were pretty darn good the last 10 games!

CAN CONTINUITY BENEFIT MASOLI, TICATS IN 2018?

After losing their first eight games, June Jones and Jeremiah Masoli reinvigorated the Ticats’ season, getting back in the East Division playoff race and winning six games after Labour Day.
Over that time, Masoli finished the season with five straight 300-plus-yard games, including 438 yards against Ottawa in Week 19. He finished the season with an impressive 15 touchdowns and only five interceptions, all but cementing a starting job going into 2018.
With things staying the same, for the most part, Masoli is getting a golden opportunity to shun his detractors.
Of course, over their late-season success, the Ticats found strength elsewhere, too. Brandon Banks was the CFL’s most productive receiver over the second half of the season, recording most of his 1,011 receiving yards over the last 10 games.
The O-line improved drastically in the last couple of months, leaning on rookie Ryker Mathews and veteran addition Tony Washington for success on the ground and through the air. That unit returns entirely intact for 2018.
Alex Green gets the reins at running back after the C.J. Gable trade, with the 2017 rookie averaging 5.7 yards per carry to go with five touchdowns in six games.
On defence, subtle changes will affect a unit now influenced by Steinauer and Glanville. Emanuel Daviswas released but outside of that, key cogs were brought back and the Ticats’ defence will closely resemble the one that thrived late in 2017.
MORE HERE 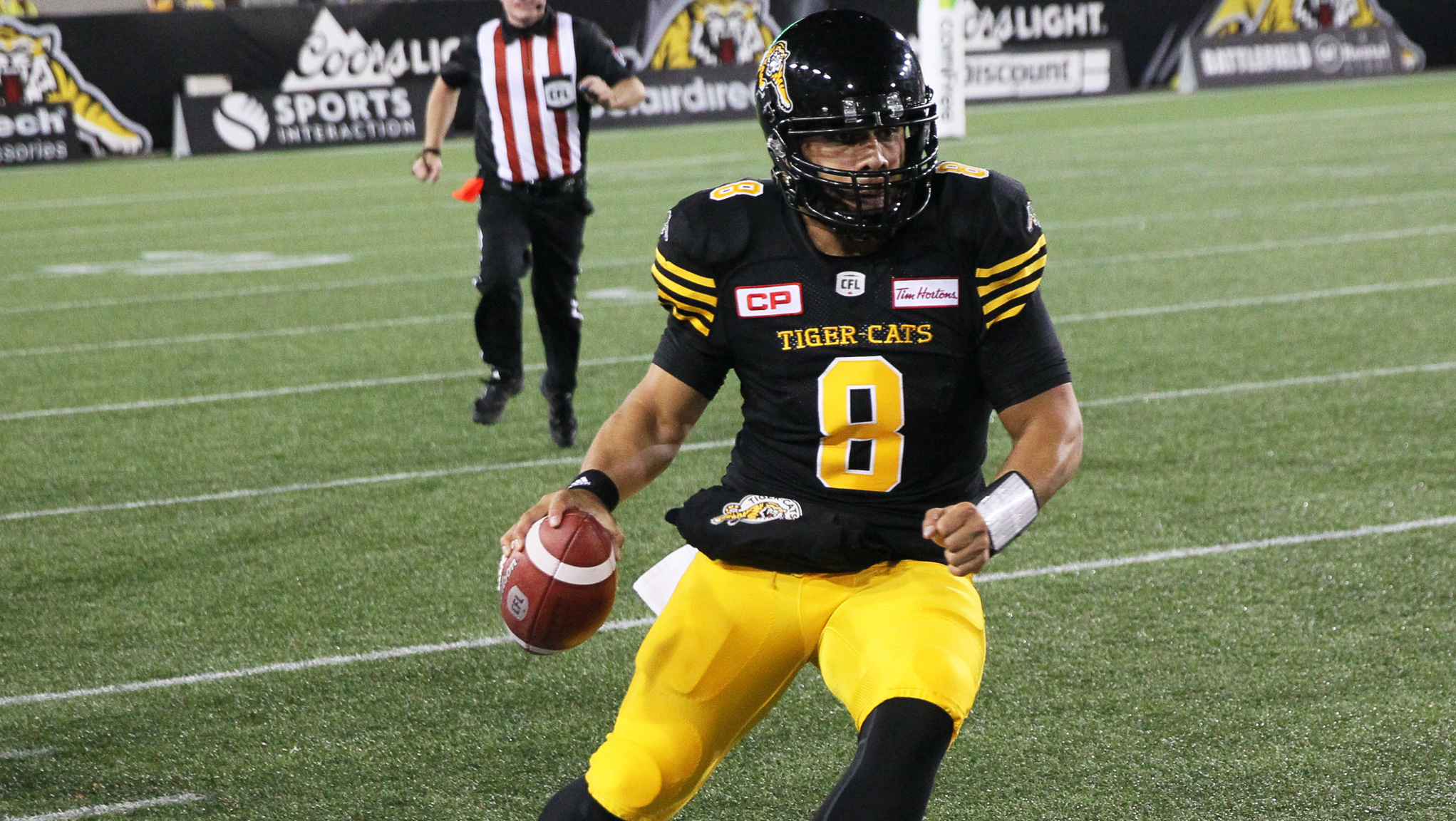 For the Hamilton Tiger-Cats, the hope of winning a Grey Cup in 2018 begins and ends with Jeremiah Masoli. More on what's been a quiet off-season in the Hammer.

Surely no one would want any organization, or any staff, to look ahead at their upcoming season and publicly declare “We are only good enough to finish last??

Surely, if any team thought that way, they would quietly spend the off season shoring up weak spots, and working to improve.

For me, the fact that the Cats are going for player continuity, and have brought back Steinhauer, indicates they feel last season’s finish is a better predictor of the 2018 season’s play than last season’s start. I think that is a good thing.

... has convinced his other big-titled associates ...

Reading this last night, on my small phone, with my deteriorating eyesight ... I didn't see the "L" in "titled". Thought it was a double-T. Glad I was wrong.

I believe that based on the second half of last season that the team that finished the season was good enough to beat any team and win the Grey Cup. There's really no question in my mind. We beat the Grey Cup champions once, had them beat and let them off the hook, and played 59:50 toe to toe against the team that they beat in the Grey Cup.