I went to watch my first Hamilton High School football game in about 30 years today when I went to see my nephew play in his junior team football game St. Mary's at Brebeuf.

Some things that jumped out at me from watching the game.

2 - St. Mary's whose junior team I guess had not won a game in years until a 27-0 win last week has a very good team. Winning the shortened game 35 - 0. One player in particular (# 33 I believe) was scary good, big powerful and very fast. He had at least two very long touchdown runs today one on a sweep, one on a kick return.

3 - What a gorgeous artificial turf field at Brebeuf

4 - The disturbing take from the afternoon. Now I completely understand why parents want their kids playing soccer - or some sport other than football. Unfortunately twice players were immobilized and taken away off the field in ambulances. The two 25 minute plus delays while training staff and EMS cared for the injured players resulted in the game being called midway through the 3rd quarter with St. Mary's running away with the game. My sister told me the same thing happened once with a player being taken away by ambulance in their game last week. 3 players taken to hospital in just two games. That is scary!

This the unfortunate scene all those there witnessed twice this afternoon.

when I was in HS (22 years ago) they were doing the same 4 downs and playing at Ivor Wynne.

Its just easier to make a first down.

that is a beautiful field, sure beats getting turf burn at IWS ouch!

That is indeed unfortunate and disturbing, and good for you for reporting it here. It's a matter worth discussing among football fans and there are undoubtedly lots of issues around it to consider. For example, concussions and other injuries are also a serious concern in soccer at all levels, and the same goes for ice hockey, probably basketball and, I can only imagine, lacrosse. At the same time, playing sports is great for character building, in addition to the benefits from physical activity that it offers, especially to young people.

Football, excluding the variety very young usually play with flags, is an instrincally violent (some have said para-military) sport. The question is, at what age should men (or women) play at a level at which the violence becomes expected and integral to the game?

Moreover, has it always been the way your account suggests, or is this a new phenomenon? I don't know. I played football for nine years in the late-sixties and early seventies, at various levels, and never saw anything remotely like what you've shown and described.

There were injuries, of course -- and plenty of them. I suffered a few. I remember one game at which my parents were in the stands and I went down, and I heard from my father afterwards that my mother was in a panic worrying about me. I got up, missed a few plays, and returned, but it probably took her days to get over it.

What else might account for EMS workers rushing on to a field to treat so many injured players? Is it due to an abundance of caution that didn't previously exist? Is it because EMS services are available now and they weren't before? Again, I don't know.

I do know that high school football in the United States, for example, has reached very sophisticated levels in terms of coaching, training, use of video, etc, all of which is to say that the level of competition is extremely high. I'm sure that results in injuries. How do they compare with what's going on here?

This is excellent material that a journalist might use to start a deeper probe into the subject. I'd be interested to know the results.

Football is a great game. Its integrity, as the NFL has proven lately, depends not on glossing over concerns or facts but on open discussion and fair deliberation about the limits to which it should be played and the character of people who are involved in it.

No one should be deemed expendable or needlessly put in harm's way, or encouraged to do harm, for the sake of what should be earnest and serious competition.

If it is genuinely evolving into something other than the latter, serious inquiry is warranted.

Hey TravelPat I have coached high school football for many years now and the main reason is with jrs (Grades 9-10) For most of them its there first time playing football And its more important for them to understand the rules and how to play safely. Once they get to SR football (grades 11-5th year) they move to 3 downs :cowboy:

4 downs is like a 8 foot basket beight and is easier for sure and most likely needed in Canada for coaches who are often dwaling with qb's who never played kiddie football as we don't have the kid groundroots football system here. 4 downs allows them an easier game and less pressure therefore.

if you liked that field go check out Newman, Br and STM. They all have stands holding over 1000 people, a press box, scoreboard and turf.

Ps. Newman Sr's (my alma mater) are ranked top 25 in Canada and 1st in Hamilton. They lost to Rob Ford's old team which he used to coach at OFSAA last year.

They also travelled down to Ohio a couple weeks ago to take on a Top 10 school from Ohio.

Here are videos from my last play as a high school football player. I was on the field on the losing end of the "steel city miracle."
Playing for brebeuf that day was Spencer Moore(Mac and Roughriders) and Joey Cupido (Mac)

To this day it still hurts lol.

The stands at Brebeuf were not that big but probably would hold 300 or so and it did have a press box with camera stand on top of it. And they had a good sized electronic scoreboard in one of the corners opposite the stands. Here is a shot across the field towards the stand.

Wow King - what a sick play by Brebeuf to win that game. Wild!

Wow...isn't it wonderful how the catholic schools have million dollar fields and the public schools are still playing on sandlots.... Must be all the spaghetti dinners and bake sales they run....good for them....(eyes rolling through the back of my head onto the floor and then down the street)

Here are videos from my last play as a high school football player. I was on the field on the losing end of the "steel city miracle."
Playing for brebeuf that day was Spencer Moore(Mac and Roughriders) and Joey Cupido (Mac)

Go Braves!
I went to watch the final the next week against STM. Didn't work out so well IIRC.

I think Brebeuf's Sr. team won a total of 4 games in the 5 years I went there in the late 80s/early 90s. Cathedral & St. Mary's were the power teams then.

Wow...isn't it wonderful how the catholic schools have million dollar fields and the public schools are still playing on sandlots.... Must be all the spaghetti dinners and bake sales they run....good for them....(eyes rolling through the back of my head onto the floor and then down the street)

If you build it they will convert 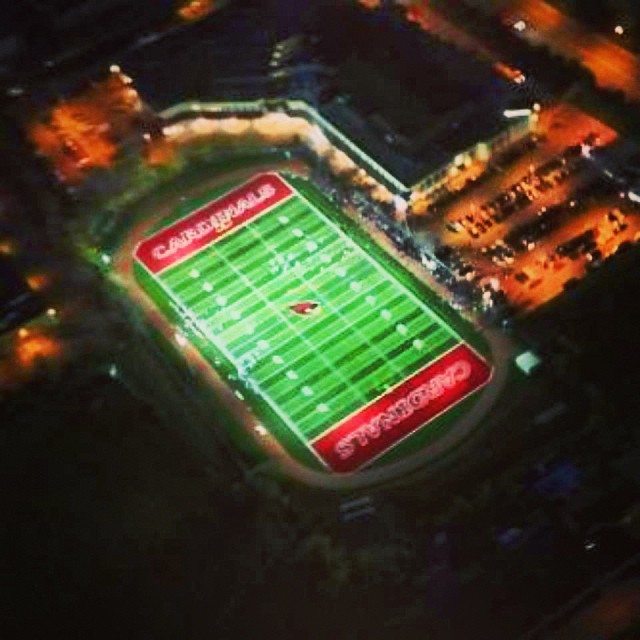 Since these photos were taken last Fall a new scoreboard, press box and additional grandstands have been added.

So I attended the Caridnal Newman- BR game last night.

Newman is ranked 7th in canada. They ran away with the game by over 30 points. It was homecoming at newman. Attendance was over 1200(their second largest attendance ever). They had a concession stand going as well as play by play announcers. There was a beer garden for alumni after the game. Great atmosphere.

Newman went do to Ohio to play a top 10 team from that state for a game. They had a tough time adapting to American rules and field and were spanked. Newman was also in pre season while the top 10 Ohio school was playing its 4th regular season game. There were over 5000 people watching the game.

I found it interesting that the game counted as a regular season game for the American school. Similar to their college system they have "conference games" and "out of conference" games where they are allowed to select any school to play. They subsidized the cost of Newman travelling there to the tune of $5000. The better newman does in their regular season the more points the american school gets from the win over newman.

Next week Newman plays STM in a battle of undefeated teams. The two best teams in the city.

OFSAA (ontario football championship) games will be held at THF this November. I'd encourage some of you to check out the local talent!

here are some pictures from last nights game. 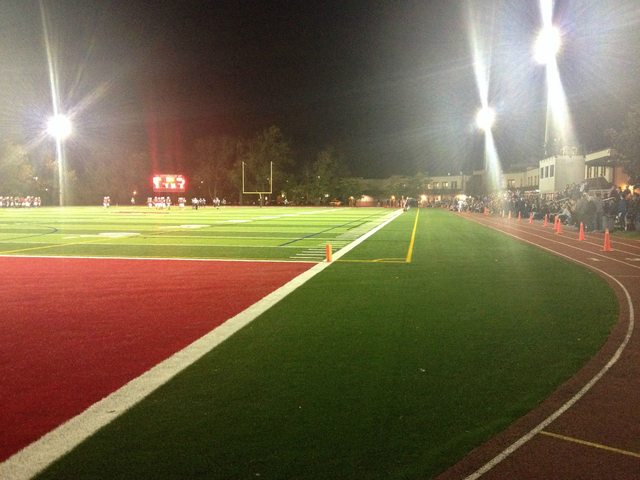 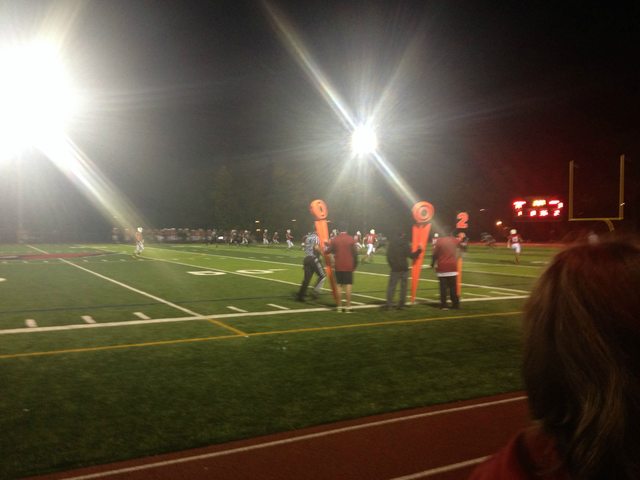 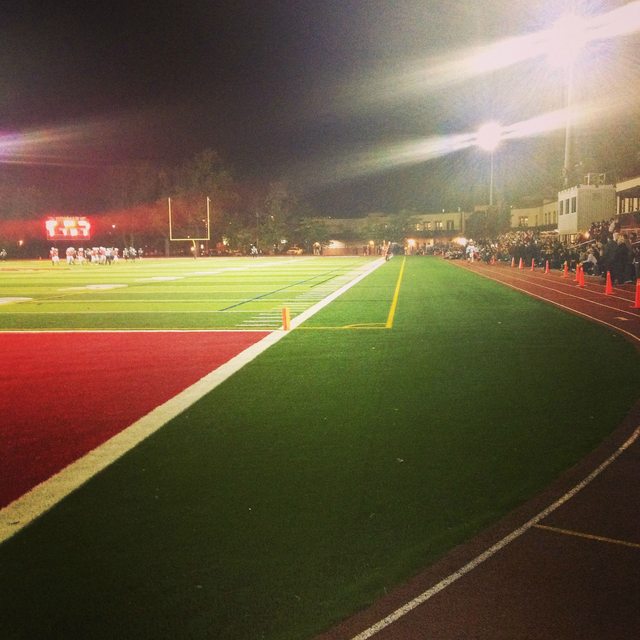 I just might check out THF for the provincial championship! Thanks king for that info.

The OFSAA championship - is that for all Ontario, city of HM or regional?

The OFSAA championship - is that for all Ontario, city of HM or regional?

All of ontario. There are 16 different high school athletic associactions in Ontario. The champions of each of the 16 are randomly drawn against each other in 8 championship games. For reference the hamilton catholic board is in "ghac" the golden horseshoe athletic conference. They would play the halton board champion for a birth at ofsaa representing ghac.

The hamilton public board is in "sossa" southern ontario secondary sports association. They play the winner of the niagara board for a spot at ofsaa representing sossa.

There are 14 other athletic associations across ontario.

This is the second year of the current format.

It required an extra playoff game to get down to 10 teams but i preferred that setup as it allowed for regional rivalries.

The nephew I took to the game Friday night - I had earlier that afternoon gone to his junior football game - St. Mary's at Thomas More not far from where I live on the west mountain. Wow! Another FABULOUS facility for football at a Catholic High School at Thomas More. Fantastic artificial turf field with track around it, big electronic scoreboard and easily enough seating for about 1,000 or more fans with a press box with camera stand on top of it. Awesome facility.

Plus for junior football Thomas Moore had a few AMAZING talents. A great running back and their quarterback was fantastic. He was throwing tight spirals with or into the wind (which as you know was blowing pretty good last Friday afternoon). His throws were like lasers. He completed at least three long bombs at least 40-45 yards down the field with the receiver not even having to break stride in making the catch. Very impressive. And we're talking the high school junior team!

Here are some shots I took of the great facility.

Look at the great stands and press box. Eight or nine rows of seating, elevated so even the first row you had a decent view.

Should be a good night for football and you'll still be home before 9:30pm.